Encouraging developments in Uzbekistan’s attention-starved oil and gas industry are looming on the horizon, the president promises. 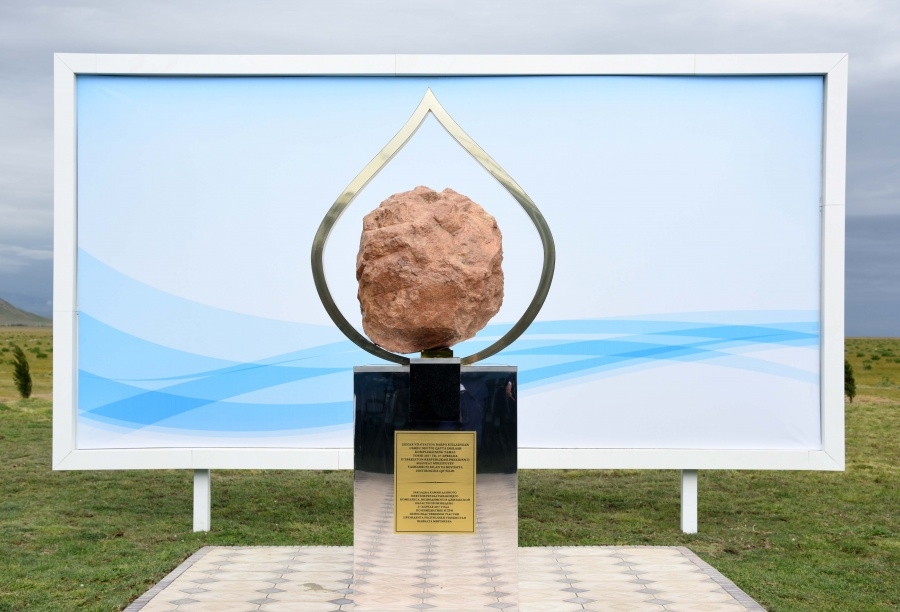 The first stone of the oil refinery complex in the Jizzakh region. The groundbreaking ceremony, attended by Uzbek President Shavkat Mirziyoyev, was held on April 27, 2017. (Photo by the Uzbekistan Presidential Press Service)

Since the soil beneath Uzbekistan is brimming with oil and gas riches, the president asked indignantly at a recent government meeting, why are the people not benefitting?

The oil and gas industry is the latest underperforming area of Uzbekistan’s economy to feel the heat of Shavkat Mirziyoyev’s wrath. Output forecasts for natural gas and petroleum products have not been met, he grumbled. And while the energy industry hit its targets last year on the extraction of oil and gas condensate and on the production of liquefied gas, the sector is beset with a mounting array of problems, he said. In an earlier televised four-hour speech to parliament, in December, the president complained that failure to modernize the oil and gas industry meant that more than one-fifth of output was being lost during extraction and transportation.

The solution to these woes will be to explore more and develop ever more new fields, Mirziyoyev said at the January 25 meeting with officials from state-run oil and gas company Uzbekneftegaz.

Seeking to strike a positive note at the meeting, Mirziyoyev said encouraging developments are looming on the horizon. The volume of natural gas and oil reserves prone for development will expand in 2018, by 57 billion cubic meters and 3.6 million tons, respectively. While Mirziyoyev provided no contextual figures, the most recent annual edition of the BP Statistical Review of World Energy puts Uzbekistan’s proven gas reserves at 1.1 trillion cubic meters and oil reserves at 100 million tons.

State media regularly announces news of promising discoveries and the imminent start to work on projects to drive home that impression of dynamism.

Most recently, Uzbekneftegaz late last month revealed that new gas reserves had been discovered in the Ustyurt Plateau in a remote and desolate section of the country’s westernmost region, Karakalpakstan. That announcement was implicitly volunteered as vindication of a February 2017 presidential decree ordering further exploration of the Ustyurt area.

Even more immediate hopes are being put in the 25 Years of Independence field in the southern Surkhandarya region. The field is estimated to hold more than 100 billion cubic meters of gas.

At that field, as in other areas of the Uzbek oil and gas sector, Russian companies have taken the lead. 25 Years of Independence is being developed under a production sharing agreement by a consortium bringing together Gas Project Development Central Asia (a subsidiary of Gazprom International), Uzneftegazdobycha (the development branch of Uzbekneftegaz) and Cyprus-registered Altmax Holding Ltd. That last company, which controls 37.5 percent of the consortium, was acquired in November by Russian transportation tycoon Andrei Filatov.

It may be too early to know if this project will quite meet the Uzbek government’s expectations, however. A fuller evaluation of 25 Years of Independence is only expected by the end of 2018. Once extraction begins, the initial plan is to draw 2 billion cubic meters of gas per year and for that volume eventually to double. The entire project is expected to cost more than $5 billion, although industry experts warn that price tag could bloat. It may be a long time before Uzbek coffers sees any return on that investment.

The prospect for new oil discoveries looks much less bright, although there are some consolations there too.

“New technologies will make it possible to increase the amounts of oil that can be drawn at mature fields. It is by those means that Uzbekistan has the potential to increase its reserves. New major oil and gas finds are a thing of the past,” Igor Ivahnenko, an expert on Caspian energy issues for Moscow-based consultancy RusEnergy, told Eurasianet.

Squeezing more oil out of legacy fields also invariably means touting the work out to foreign investors. Although Russian companies have done most of the running to date, there is a soupçon of interest from Western majors. When Mirziyoyev visited the United States in September, he let slip that he thought ExxonMobil might be on the verge of entering an exploration deal with Uzbekistan. Nothing has come of that yet, however.

In 2016, Russia’s Lukoil began building a $3.3 billion plant to develop gas condensate from its patchwork-like Kandym fields in Bukhara province. Once fully completed, that plant should be able to produce 8 billion cubic meters of natural gas annually. Lukoil completed the first stage of the project in November — five months ahead of time — enabling it to start producing 4 billion cubic meters annually.

The start of work last April on a $2.2 billion oil refinery in the Jizzakh region, around 200 kilometers southwest of Tashkent, comes at a particularly critical juncture. Around 1.1 million tons of automobile fuel were produced in Uzbekistan in 2017, a slight drop from 1.13 million tons the year before. Though there are no publicly available figures on how much car fuel Uzbekistan’s motorists consume, the chronic problem of shortages is evidence that there is nowhere near enough to go around.

In a stark departure from the politics of self-reliance demanded by the late President Islam Karimov, who died in September 2016, the Jizzakh refinery specifically envisions importing the crude oil at the beginning of the production process from Kazakhstan and Russia. If all goes to plan, the refinery will process 5 million tons of crude oil annually and convert it into 3.7 million tons of high-grade car fuel and 700,000 tons of aviation fuel, among other things. That is expected to be enough not just to meet local demand but even to sell refined fuel back to Kazakhstan, which experiences its own regular car fuel deficits because of lack of refining capacity.

In emailed comments to Eurasianet, Andrew Neff, energy analyst at IHS Markit, noted that in fairness to Karimov, the gradual shift of emphasis in the oil and gas industry did begin before Mirziyoyev’s ascent to power. The increase of urgency is clear to see, however.

“On the energy front, I think it’s relatively positive that the government is focusing on the domestic market … seeking to add value to its gas production, rather than simply targeting exports, where there really is no market for Uzbekistan, outside of China,” Neff wrote.