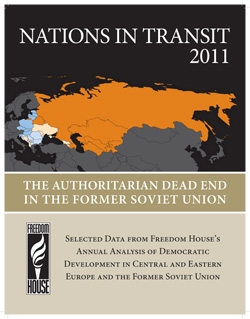 Freedom House's latest Nations in Transit report doesn't tell any new story about Uzbekistan, but arranges the data in a compelling fashion to help us reflect on comparisons with the Arab Spring and the potential for change in this despotic Central Asian country.

A graph showing the years of entrenched leadership of the post-Soviet region is a vivid indication of the problem -- the highest bars are in Central Asia, with Uzbek dictator Islam Karimov among the longest in power (19 years), and with others showing change only by ensuring continuation of a family dynasty (Azerbaijan) or a "tandemocracy" (Russia) or changing nothing fundamental about the past dictator's legacy (Turkmenistan).

Uzbekistan has ranked at the bottom of the scale for assessment of the post-Soviet nations for years due to its harsh crackdown on political and religious dissent.

“The recent upheaval in the Middle East should raise real questions among authoritarian, seemingly entrenched regimes in the former Soviet countries,” says David J. Kramer, president of Freedom House, in a preface to the report.

Should -- but has it? Some believe Islamov's intransigence has been a serious topic of state with Russia and the Shanghai Cooperation Organization.

But perhaps the real question to ask if why, after 20 years, and such a worsening scene, we are still speaking of these nations as being in "transit," when they are obviously not going anywhere.

There's also the debate to be had -- recently revived by scholar Leon Aron, about the nature of the Soviet Union and its change, in an article "Everything You Think You Know About the Collapse of the Soviet Union is Wrong.". It's a bit of a Moscow-centric debate about whether the USSR changed faster than the West knew (or had anything to do with), and therefore perhaps wasn't as bad as we thought.

The problem is that this thesis can't explain why, after 20 years, the Soviet-style arbitrary rule, the imprisonment and torture of dissidents, the state-set cotton quotas and forced labor, the suppression of the media and political parties and NGOs, and even the propiska (resident permit system) all remain unchanged in Uzbekistan. Even the state orders system didn't collapse -- Moscow still buys a lot of Uzbekistan's cotton; Turkmenistan's buys vehicles from Uzbekistan. And in fights about everything from water resources to civil unrest, some look to the Kremlin for assistance.

Bruce Pannier, the Central Asian analyst for Radio Free Europe/Radio Liberty, has a thoughtful essay on Uzbekistan in the report, and seems to dismiss the facile theories of upheavals like the Arab Spring coming to Tashkent:

President Karimov’s authoritarian regime is nearly two decades old, and no force within the country represents a serious challenge to Karimov’s continued rule. Secular political opposition leaders have fled Uzbekistan, and any of their remaining followers are politically fragmented, vigilantly monitored by security services, and unable to legally participate in the political process, because the Justice Ministry refuses to register them. Banned Islamic groups that target Karimov’s government may cause minor and temporary chaos in the coming year, triggering a heavy-handed crackdown on suspect groups and organizations. Realistically speaking, such movements have no chance of overpowering the country’s security services and military to oust Karimov.

Well, Freedom House wrote that sort of thing about Tunisia in 2009, and like many transition-watchers didn't anticipate the power of a desperate street peddler to change the world.

Even so, there's a reason why Pannier is likely right for now -- not only is Karimov, at the age of 72, still pretty healthy, he's ensured a succession process. More to the point, says Pannier, the West is no help in supporting change: "strategic and economic concerns prevent the international community from imposing sanctions or limiting diplomatic contact with Tashkent."