Uzbekistan Remains on US Watch List for Child Labor 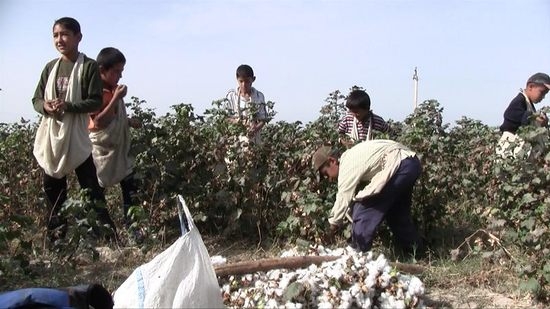 Uzbekistan is included in G-TIP as in past years, and remains on the Tier 2 Watch List due to failure to eliminate the state-sponsored practice of forced child labor in the cotton industry. (The definition of "trafficking" in this report includes any form of coerced labor.)

In 2008, under the conditions of the US Trafficking Victim Protections Act passed by Congress, countries that have been on the Tier 2 Watch List for more than two consecutive years would have to either improve their practices or be downgraded to Tier 3. This "automatic downgrade" which was anticipated for a number of countries began to create political difficulties when some of America's allies and needed partners fell on the list.

As a result, Uzbekistan remains at the Tier 2 level, despite four consecutive years in this category, and despite the State Department's admission in the report that Uzbekistan "does not comply with the minimum standards for elimination of trafficking" and has "demonstrated negligible progress in ceasing forced labor" and has failed to investigate and prosecute officials responsible for the use of forced child and adult labor. The State Department's rationalization has to do with accepting Uzbek government declarations in lieu of action:

Uzbekistan was not placed on Tier 3 per Section 107 of the 2008 Trafficking Victims Protection Reauthorization Act, however, as the government has a written plan that, if implemented, would constitute making significant efforts to bring itself into compliance with the minimum standards for the elimination of trafficking and is devoting sufficient resources to implement that plan. As in previous years, the government set a quota for national cotton production and paid farmers artificially low prices for the cotton produced, making it almost impossible for Uzbek farmers to pay wages that would attract a consenting workforce. Provincial governors were held personally responsible for ensuring that the quota was met; they in turn passed along this pressure to local officials, who organized and forced school children, university students, faculty, and other government employees to pick cotton.

So Uzbekistan was able to wriggle out of a downgrade to Tier 3 because it has a "national action plan" and has created a state-controlled "monitoring body," neither of which have proven effective. Reports are already coming in this year of the use of children to do weeding of the cotton fields under conditions with hazardous pesticides.

The G-TIP report also cites the permission for UNICEF to help mitigate the use of child labor in Uzbekistan. This is an important Uzbek government -- and international agency -- admission that the problem of child labor exists -- it is often denied by Uzbek officials. The acknowledgement of UNICEF that it has been enlisted in such a mitigation effort is also a an invaluable validation of the reports of domestic and international non-governmental groups. Yet the UNICEF program is not a formal monitoring of labor conditions, which should be performed by the International Labor Organization (ILO).

The Uzbek government has persistently refused to invite in an ILO mission during the harvest season, despite calls for human rights groups and employer and labor groups at the ILO annual meeting. With little time to organize and conduct such a mission properly starting in late September or early October, when the cotton harvest begins, it does not seem likely it will take place this year.

The inclusion of Uzbekistan at all in the G-TIP Watch List caused some debate among analysts who questioned the advisability of alienating a much-needed ally in maintaining the Northern Distribution Network supplying NATO troops in Afghanistan, although Uzbekistan has pledged to abide by ILO Conventions it has signed to eliminate the worst forms of child labor.