As in other parts of the former Soviet Union, Uzbekistan has a complicated relationship with the legacy of the war against Nazi Germany. 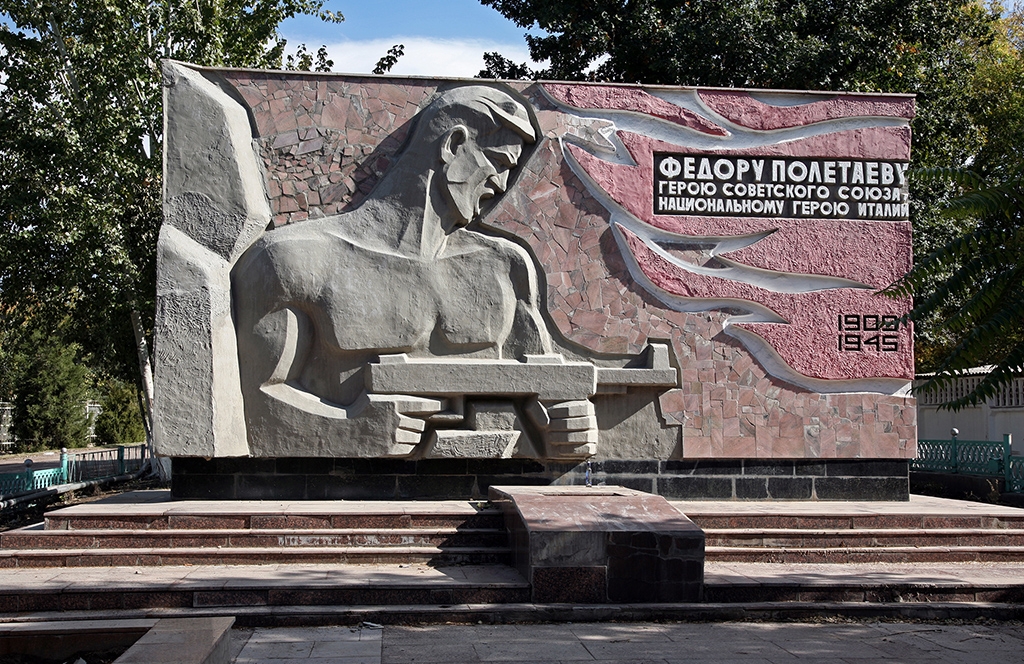 Before the debates began to rage around the world about which statues should be permitted to stand, a small town in Uzbekistan resurrected its own contentious memorial to a thorny passage of history.

On May 9, Victory Day, an annual event to mark the end of World War II, a bust to Fyodor Poletayev, a Soviet soldier who fell in battle fighting the Nazis in February 1945, was unveiled at a formal ceremony in Krasnogorsk, just southeast of Tashkent.

A large memorial to Poletayev that had stood on the same spot since 1972 was demolished, to the dismay of many local people, in 2014.

As in other parts of the former Soviet Union, Uzbekistan has a complicated relationship with the legacy of the war against Nazi Germany. For one camp, the war was a noble if profoundly painful conflict that saved the world from fascism. And then there are those who resent the fact that any Uzbeks should have died on behalf of what they perceive as a colonial overlord. The government, meanwhile, has for decades tried to pursue a middle path, memorializing the war, while rejecting the triumphalism.

Krasnogorsk was founded in 1954 to house workers at a nearby uranium ore mine. Because of its strategic value, the town was closed off to the world, but also enjoyed many enviable perks. Sought-after goods like cheese, sausages and even seafood arrived in abundance. Getting a special permit to enter Krasnogorsk, and therefore gain access to its stores, was like winning a golden ticket.

The monument to Poletayev, a stern Soviet realist bas-relief of a muscled and bare-chested warrior aggressively thrusting forward with his rifle, was erected in the spirit of intense militaristic patriotism that typically prevailed in such places. The central square was where schoolchildren were ceremonially enrolled into the ranks of the Young Pioneers. Older youths swore their vows to the Komsomol on the same spot.

Everybody knew the Poletayev story. He was a hero of peasant stock from the Russian town of Ryazan who died alongside resistance fighters in the northern Italian town of Cantalupo Ligure in February 1945, in the twilight days of what the Soviets called the Great Patriotic War. People in Krasnogorsk were told that Poletayev was celebrated as a great hero in Italy, although in truth he is little known outside a small corner of that country.

An account in Istoriya.rf, a Russian government-initiated website created to collate accounts of the country’s military history, adds a further twist to the tale. For a while, Poletayev’s fate was unknown. It was even suspected by Soviet authorities that he might have defected. But then in 1947, a Soviet consul in the city of Genoa was presented with a posthumous gold medal of valor for the feats performed by a soldier in the ranks of the partisan Garibaldi Brigades. The name on the reverse was Fyodor Andrianovich Poetan. The Italians struggled to pronounce Poletayev’s actual surname and instead coined one that suited his romantic, derring-do spirit, according to Istoriya.rf’s retelling. 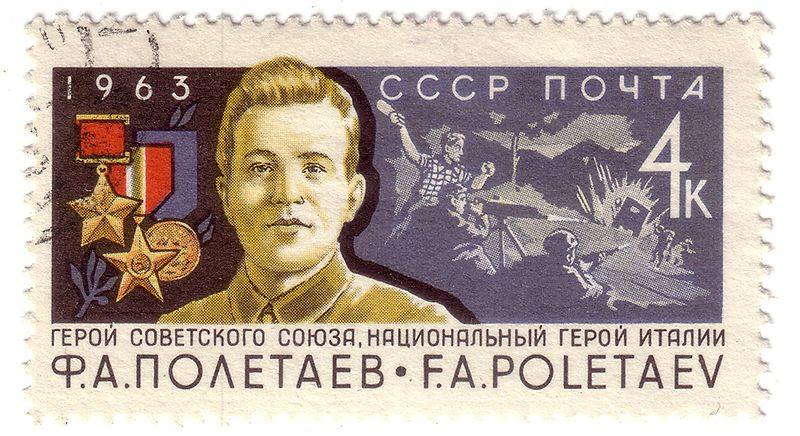 The definitive link between Poetan and Poletayev was only made in 1962, when he was posthumously awarded the title of Hero of the Soviet Union.

In today’s Krasnogorsk, residents are unsure as to how it was that Poletayev came to have his statue in their town. Zukhra-opa, 60, sells fruit in a place not far from where the monument stood.

“It was a nice place, children played there. They place flowers there on holidays. The hero was called Poletov, I think,” she said. Uzbeks too often have trouble getting their mouth around the name and variously call him Poltayev or Poletov.

Under the rule of the late President Islam Karimov, who died in 2016, official attitudes toward the war evolved. Even the name Victory Day was changed, in 1999, to Day of Memory and Honor, a more somber title that solemnly memorialized the loss of around half a million Uzbek lives. In Russia, the holiday has increasingly become a spectacle of bombastic, muscle-flexing celebration.

In 2000, censors were instructed to ensure that newspapers and magazines did not feature images of veterans wearing Soviet military orders and medals. In some cases, photos were edited accordingly. Veterans paraded on TV could wear service ribbons to show they had served, but not the medals themselves. Medals issued by the Uzbek state, of course, could be worn and displayed freely.

In time, references in textbooks and the media to the Great Patriotic War, which ran from 1941 to 1945, were phased out in favor of World War II.

The process of demolishing war monuments began in the mid-2000s. Usually, such exercises would be done secretly, under cover of night. Justifications were formulated to motivate the removals when secrecy was not an option. One was that the monument in question did not “fit the architectural ensemble of the city” or that it was in a dangerous and dilapidated state. The wariness was likely motivated by the intense sensitivities evinced by Russia, a nominal ally. When Estonia elected to relocate a war memorial away from the center of the capital city in 2007, it triggered furious reactions from Moscow.

When Krasnogorsk officials moved to demolish their Poletayev statue in the spring of 2014, the decision was met by protests from local residents. It was all for nothing.

Authorities pledged that the monument would be replaced by another one – a generic sculpture called Grieving Mother, which has become the standard World War II memorial in towns across Uzbekistan. But then the money ran out. All that went up was a plain, marble wall with the inscription Khotira Maidoni, or Memory Square. 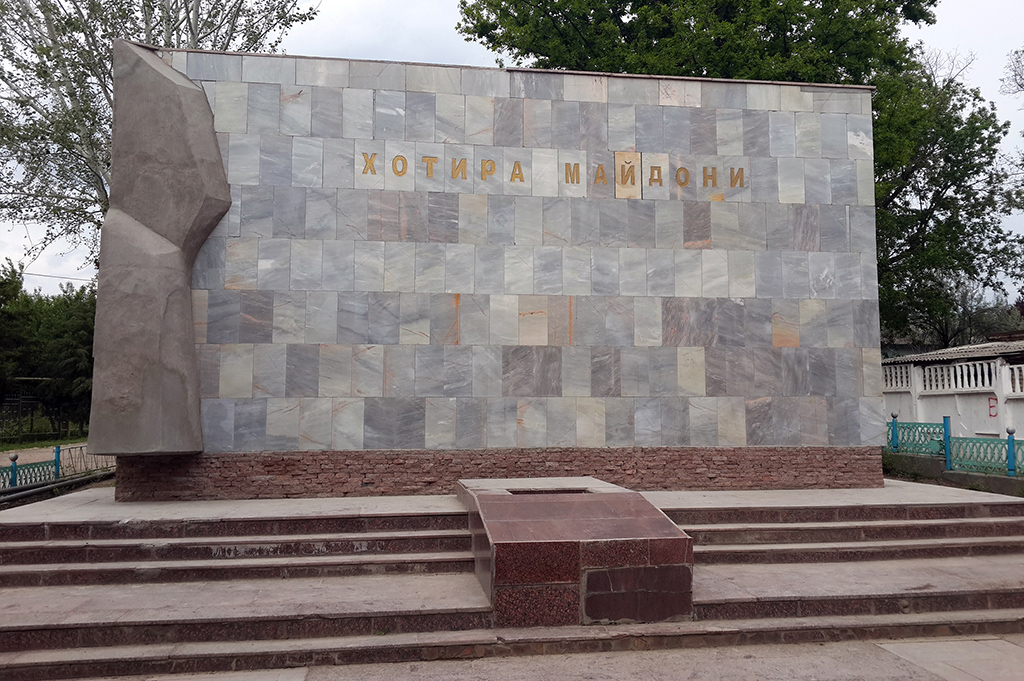 The whole affair was revived in February, when the governor of Russia’s Ryazan region, Nikolai Lyubimov, appealed to Uzbek authorities to restore the monument to Poletayev. Lyubimov made the remarks during a visit to Italy, where he visited the plaque erected in honor of the fallen soldier. The governor grumbled that the original statue had been destroyed without people in Ryazan, where Poletayev was from, being told.

“If we had been informed in due time, we would have raised funds and helped move the monument to the place of birth of our hero,” Lyubimov said in a video message.

Just a few days later, city hall in Angren, which includes Krasnogorsk in its area of responsibility, announced that the statue to Poletayev would be restored. There could be no talk of reverting to what was there before, however.

“The massive bas-relief was totally destroyed, so we had to do something new,” sculptor Rufat Rakhimov told Eurasianet.

What Rakhimov created over 10 days was a polyurethane bust, which was installed in front of the marble wall on May 7 and then unveiled two days later.

Alexander Krikov, the chairman of the Russian cultural center in Angren, attended the ceremony and said he was happy to see Poletayev returned to his place.

“It is gratifying that our president devotes great attention to preserving the memory of World War II. This is our history, and we must not forget those who defended their homeland,” Krikov told Eurasianet. “I hope that this policy will be continued. Maybe they will again start lighting Eternal Flames in large cities?”

But the question still lingers as to why Poletayev should ever have been memorialized in a land he had never even visited.

Bakhrom Ismailov, chairman of the Uzbek Military Historical Society, has a theory.

“In addition to being a Soviet soldier, a participant in the Italian Resistance movement during World War II, a Hero of the Soviet Union, and a national hero of Italy, Fyodor Poletayev fought and died at the hands of the soldiers in the Turkestan Legion,” Ismailov said.

The Turkestan Legion was drawn from soldiers, typically from Central Asian Soviet republics, captured by the Nazis and then pressed into fighting on the French and Italian fronts.

Historian Ravshan Nazarov argues that restoring old monuments and unveiling new ones is a sign of positive change.

“In late 2018 and early 2019, 47 monuments dedicated to veterans of the war were restored in Tashkent. And the memorial to Shaakhmed Shamakhmudov, the blacksmith who adopted 15 orphans during the war, has been restored to his rightful place on [Friendship of People Square in Tashkent],” Nazarov said. 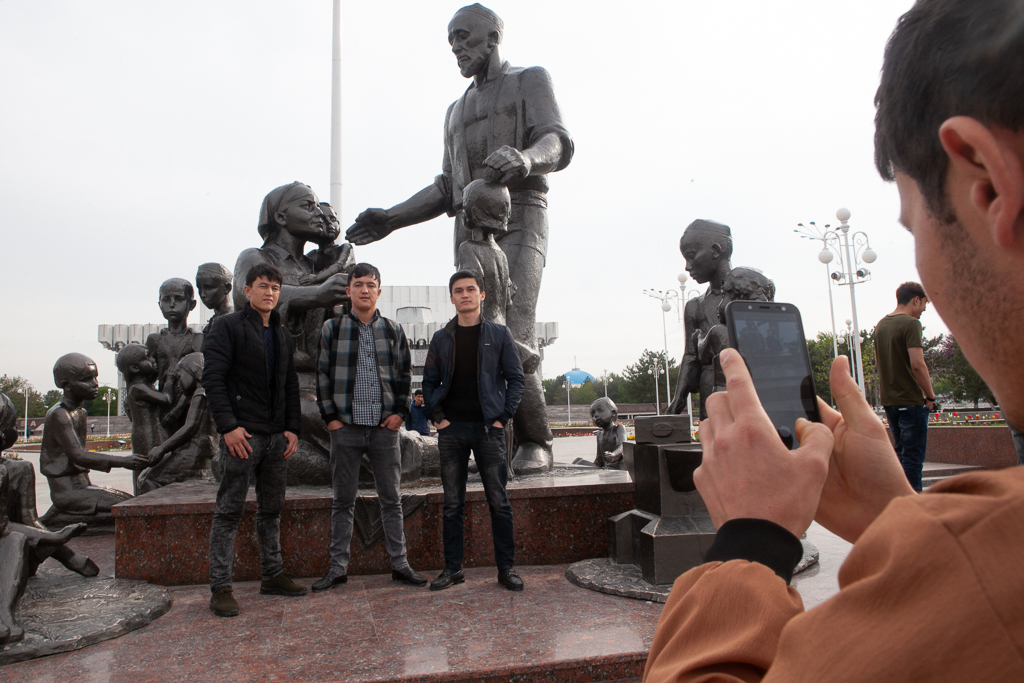 The change of mood seems to come from the top.

President Shavkat Mirziyoyev was among a small contingent of foreign leaders who attended the postponed Victory Day festivities in Moscow on June 24. Troops from the Tashkent Military District took part in the Red Square parade – a first for any post-independence Uzbek military unit.

But there are vocal dissenters too.

Journalist Yokub Umar ran an article on the website azon.uz complaining about the return of Poletayev to Krasnogorsk.

Poletayev “has nothing to do with our country. He was not born here and did not live here. It is doubtful that he knew that there was such a place called Uzbekistan,” Umar wrote.

This opinion is not an outlier. Squabbles on social media tend to break down along generational lines, with the older cohort preferring the monuments, and younger commentators objecting. “This was not our war” is a recurring phrase deployed by the latter camp.

Umar concluded his piece with a similar sentiment: “Why should we be putting up monuments to complete strangers?”