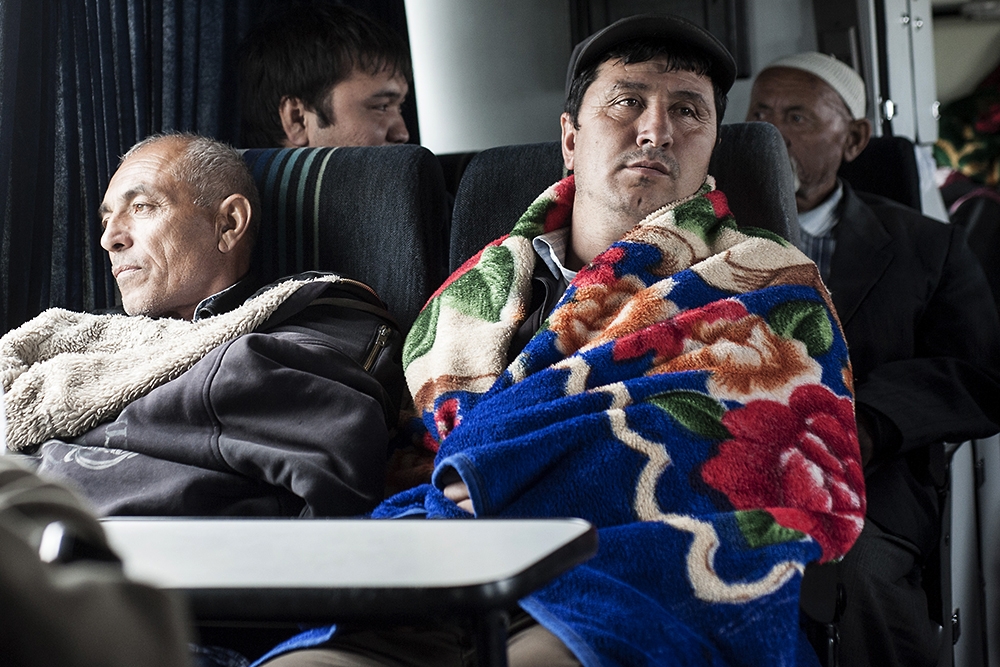 Migrant workers ride in a bus through northern Kazakhstan in May 2014 on their way to find employment in Russia. As the value of the Russian ruble continues to fall, labor migrants from Central Asia say they are less inclined to work in Russia. (Photo: Konstantin Salomatin)

Sardor Abdullayev, a construction worker from eastern Uzbekistan, had planned to go to Russia next spring to join relatives working construction sites in the Volga River city of Samara. But now, he says, “I am better off staying at home and driving a taxi.”

As the value of the Russian ruble plummets and Russia’s economy tumbles into recession, millions of Central Asian migrants have seen their real wages dwindle. On top of that, Russian authorities are introducing new, expensive regulations for foreigners who wish to work legally in the country. Some Uzbek migrants in Russia now say they are contemplating a return home. Such an influx of returnees could have uncertain ramifications for their impoverished country.

According to Russia’s ambassador to Uzbekistan, there are about 3 million Uzbek labor migrants in Russia, the most from any Central Asian country. Others estimate the number of Uzbeks could be twice that. Unofficial estimates put their remittances in 2013 at the value of roughly a quarter of Uzbekistan’s GDP. Kyrgyzstan and Tajikistan are even more dependent on labor migrants, with remittances contributing the equivalent of 30 percent and roughly 50 percent to their economies respectively.

That was before the ruble, which has steadily fallen since Russian troops seized Crimea in February, nosedived earlier in December. Thanks to Western sanctions, the low price of oil, and systemic weaknesses in Vladimir Putin’s style of crony capitalism, the currency has lost roughly 50 percent against the dollar this year. Most migrants convert their rubles into dollars to send home.

“My salary was 18,000 rubles a month, which several months ago would be equivalent to $500. Now, it is less than $300,” Sherzod, a 29-year-old from the Ferghana Valley who was working at a shop in Samara, told EurasiaNet.org. Sherzod returned home in November and he is not planning to go back to Russia. “The salary is too low.”

It is not only falling wages that labor migrants must consider. Starting on January 1, Russia will require labor migrants to pass tests on Russian language, history and legislation basics, as well as undergo a medical examination and buy health insurance (the entire package will cost migrants up to 30,000 rubles (currently about $500), by some accounts). The Moscow city government is also more than tripling the fee for work permits, from 1,200 rubles monthly to 4,000 rubles (currently $64).

Citizens of countries that are members of the Eurasian Economic Union (EEU), which will come into force on January 1, will not be affected by the new regulations. That adds an incentive – some might say pressure – for migrant-feeder countries like Tajikistan and Uzbekistan to join. (Kyrgyzstan is hoping to join in early 2015).

Sherzod, the Uzbek laborer, says that faced with falling real incomes, many Uzbeks working in Russia find themselves in a quandary. Thousands are eager to return home. But many simply do not have funds to buy a return ticket. Others worry about being seen in their native villages as failures.

Russian media outlets have quoted a migrant community leader who projected new requirements for guest workers, along with the falling ruble, will prompt up to 25 percent of migrants to leave Russia in the coming months.

With fewer dollars entering Uzbekistan, the Uzbek sum has fallen 15 percent against the greenback on the black market, according to several Ferghana-based shop owners interviewed by EurasiaNet.org. (The tightly managed official exchange rate has declined about 11 percent against the dollar this year. To help support it, from January 1 fruit and vegetable exporters will be required to sell 25 percent of their hard currency earnings to the state at the official rate, Interfax news agency reported December 18).

Despite the economic fallout from Russia, Uzbek leaders remain open to doing business with the Kremlin. During a visit to Tashkent on December 10, Putin wrote off most of Uzbekistan’s $890 million debt. That deal paved the way for new loans from Moscow. It is unclear what Uzbek leader Islam Karimov promised in return.

Uzbek authorities and well-connected businessmen claim they are prepared to manage the economic fallout, and the large number of returning migrants.

“We have numerous [state-sponsored] urban regeneration construction projects across the country. One can say that the whole of Uzbekistan is a massive construction site. So if migrants return, many of them will find work,” Nazirjan, a former government official who how heads a private construction company in the Ferghana Valley, told EurasiaNet.org on condition his surname not appear in print.

On December 15, President Karimov signed a decree that increased state employees’ salaries by 10 percent. Still, the return of tens of thousands of labor migrants and the prospect of them joining the vast pool of the already unemployed is making some official nervous.

“The SNB [former KGB] has instructed local authorities and mahalla [neighborhood] committees to create lists of labor migrants who are returning from Russia. The arrival of migrants usually increases the crime rate, and local authorities have also been instructed to be more vigilant,” a secondary school teacher in the Ferghana Valley told EurasiaNet.org.