Uzbekistan scrambles to respond to torture death in police custody

Police announced almost two weeks after the fact that the officers responsible had been arrested. 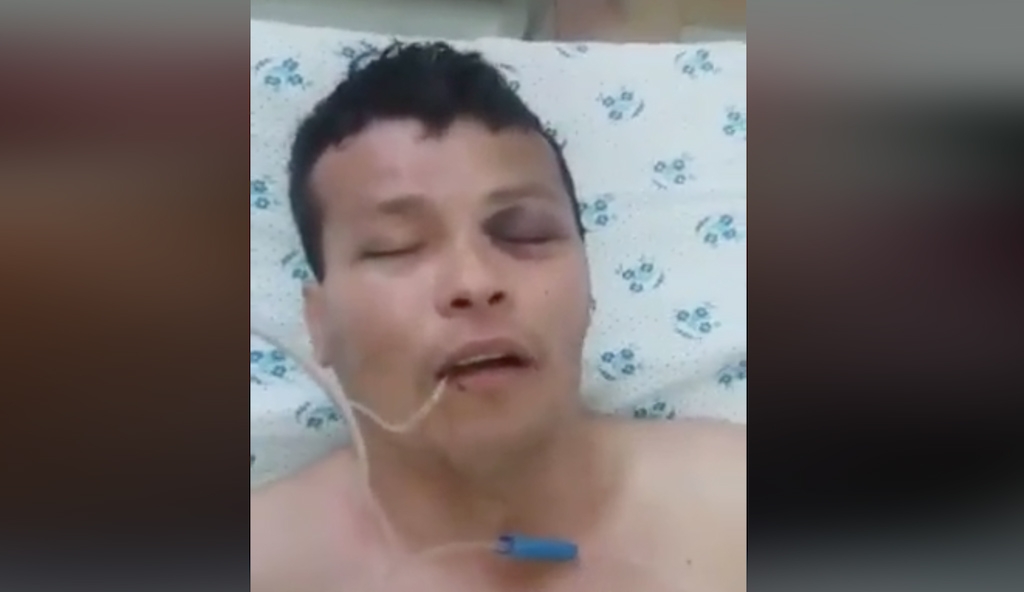 Abdukarimov seen in footage filmed a few days before his death.

Alijon Abdukarimov, from Andijan, died last week at 44 years of age. He left behind a pregnant wife and three children.

He arrived at a hospital in the eastern Uzbekistan city on May 30 after being savagely beaten in police custody. For a little under two weeks, he received treatment, but it was all to no avail.

A few days before Abdukarimov died, which happened on June 11, his sister filmed his body and showed the bruises all along his body. Hematomas could be seen on his arms, chest and legs. His left eye was still severely swollen.

“This is my brother,” she is heard saying, her voice breaking. “He left the house healthy a few days ago, and now he lies here. Look at the lesions on his feet and his abdomen. My brother is dying.”

The fate of Abdukarimov has drawn comparisons with that of George Floyd in the United States – another case of police brutality with a fatal outcome. Officials are evidently aware of the parallels and have, in a manner unusual for Uzbekistan, rushed to condemn what happened.

“This is a disgrace,” human rights ombudsman Ulugbek Muhamadiev told Gazeta.uz in an interview.

The details of how Abdukarimov ended up dead were made public by a member of parliament, Kutbiddin Burkhanov, who heads the defense and security committee. According to Burkhanov’s account, Abdukarimov, who traded in jewels for a living, was brought to an Andijan police precinct on May 29. He was accused by another man of taking possession of a gem and refusing to return it.

He left the precinct in an ambulance at 6 a.m. the following day. Burkhanov said that the detention was unlawful, and he admitted that violence had been used.

The three police officers believed to be responsible have themselves now been taken into custody and are facing charges of torture, abuse of authority and unlawful detention. The Interior Ministry claims they had already been arrested on June 1, although they only made the announcement on June 13, two days after Abdukarimov died.

On June 1, even before Abdukarimov’s sister filmed the video of her ailing brother, Deputy Prosecutor General Svetlana Artykova addressed journalists to talk about the government’s efforts to combat torture. She announced, among other things, that a state committee on the prevention of torture would be created. The current system for investigating cases of alleged maltreatment in custody are not adequate, she admitted.

“Over the past three years, there have been 757 allegations of torture, intimidation and other forms of harassment by law enforcement officials. But only 33 of them have led to prosecutions,” she said.

It is unclear whether Artykova’s press conference had been summoned in the knowledge of Abdukarimov’s ordeal at the Andijan police station.

Rights activist Abdurahmon Tashanov told Eurasianet that he sees the problem of torture as going beyond just the operations of law enforcement agencies, but as a broader political issue. Under the current governance set-up, police officers go unpunished for their crimes, he said.

“If police officers are sent to prison for torture, they already go free after one year,” Tashanov said.

This is the second known case of a death in police custody this year. In January, police in the Chirakchi district of Kashkadarya region detained a 32-year-old called Yusuf Abdurakhmonov. He was being held on suspicion of rustling cattle and was beaten so badly that he later died of his injuries. Two police officers were later charged, and the first deputy head of the Interior Ministry’s Kashkadarya division resigned.