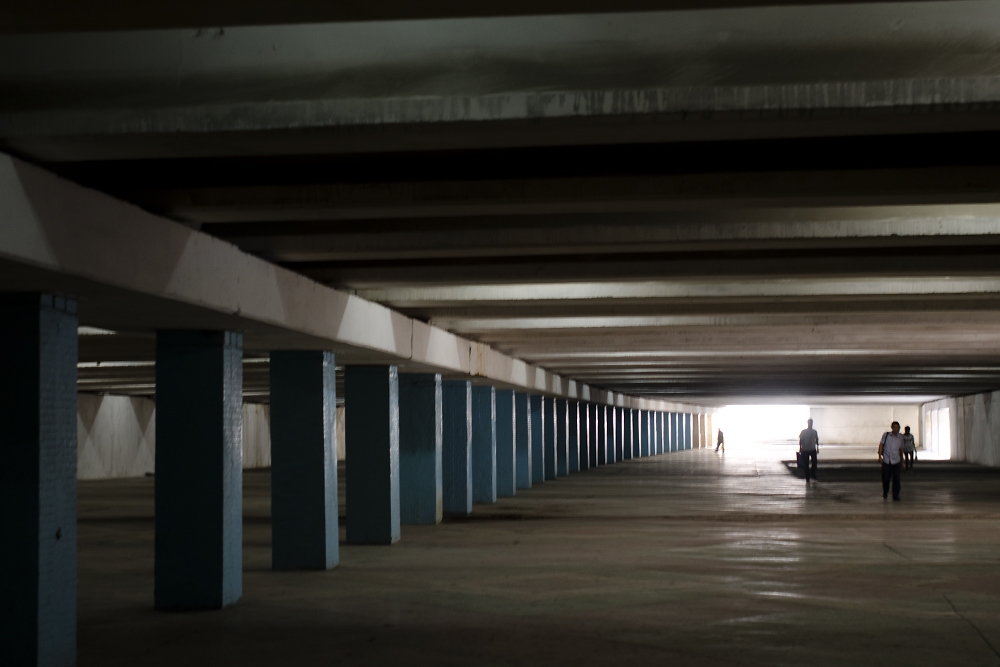 Convenience is taking a back seat to security concerns on the Tashkent metro. As a result, lots of residents of the Uzbek capital are avoiding going underground.

Before boarding a metro, riders these days must endure hassles that are reminiscent of pre-flight security procedures at airports. Police officers are stationed at the entrances of metro stations, where they inspect bags and scan passengers with metal detectors. Meanwhile, security cameras are everywhere and Big-Brother-like posters hang on the walls of stations, in passageways and in train cars, urging passengers to be aware of their surroundings.

“Vigilance is a requirement of the times,” read the only posters that hang on the walls of train cars.

In 2011, authorities prohibited advertising in the metro system. Advertising "distracted passengers' attention,” Ruslan Irnazarov, commander of a police battalion on the Tashkent metro, was quoted as saying by the 12news.uz website. "A passenger looking at an ad might fail to notice a bag left by someone, or not pay attention to the inappropriate behavior of another passenger.” This May, authorities permitted the return of advertising on a limited basis -- only in passageways and a few stations, not on trains.

The atmosphere is such that a simple ride on the metro now feels like an ordeal for many Tashkent residents. “I don't often use the metro because of police checks,” said an 18-year-old young woman who is an aspiring university student. “They always stop and check you if you carry bags with belongings or shopping. Sometimes, they check even handbags.”

A EurasiaNet.org correspondent experienced the heightened security procedures on several occasions during a recent journey in the metro system. At one station, after checking documents, two officers searched the correspondent's bag with meticulous care, and showed particular interest in an English-language book found therein. “What is this book about?" one of them asked with irritation because of his inability to read English. “I hope you won't plot a murder after finishing the book," he said after learning the plot of the book.

International watchdog groups routinely rank Uzbekistan among the world’s most repressive states. And President Islam Karimov’s administration has long cited a security threat by Islamic radicals as justification for draconian security measures. Thus, the extreme precautions being taken in the Tashkent metro can be seen as consistent with the government’s general approach on security matters.

There also appear to be grounds for official concern about a potential terrorist incident: back on February 16, 1999, car bombs detonated in Tashkent, killing 16 people and wounding over 100. Officials blamed Islamic militants for the attack, without providing convincing evidence, nor offered a clear narrative of events that day.

Having opened in 1977, Tashkent has the oldest and largest metro system in Central Asia. (Almaty has the only other metro in the region). It currently features three lines and 29 stations, with 39 kilometers of tracks. The system is vastly underutilized these days: it has a capacity to carry up to a million passengers per day, yet the latest figures indicate that average daily ridership is somewhere in the vicinity of 180,000. Official statistics in Uzbekistan are notoriously unreliable, so the actual ridership numbers could be much higher or lower than reported.

Low ridership may be one of the reasons officials have frozen construction on Tashkent’s third metro line, known as Yunusabad. Six stations on the line opened along a 6.5 kilometer-long stretch back in 2001. Authorities have long put off construction of the other three stations originally envisioned as part of the line. Those three stops would link densely populated neighborhoods in northern areas of Tashkent to the city center. According to unconfirmed reports, officials have postponed completing the Yunusabad line until 2030 at the earliest.

While many metro riders may feel disinclined to use Tashkent’s metro because of overbearing security measures, cost also appears to play a role is discouraging ridership. At 1,000 sums (about $0.33 at the black market exchange rate) per journey, public transport may seem cheap by Western standards, but it’s relatively expensive for most Tashkent residents. There are no free transfers, meaning that an individual may have to pay two or three fares per journey, if they ride buses before and after a metro ride. "I won't bother using the metro if I am going to travel for a short distance," a man in his mid-30s told EurasiaNet.org, "because I have to pay for both the bus and the metro."