Tashkent is seeking to boost domestic flour production at a delicate time, with the war in Ukraine garbling food supply chains. 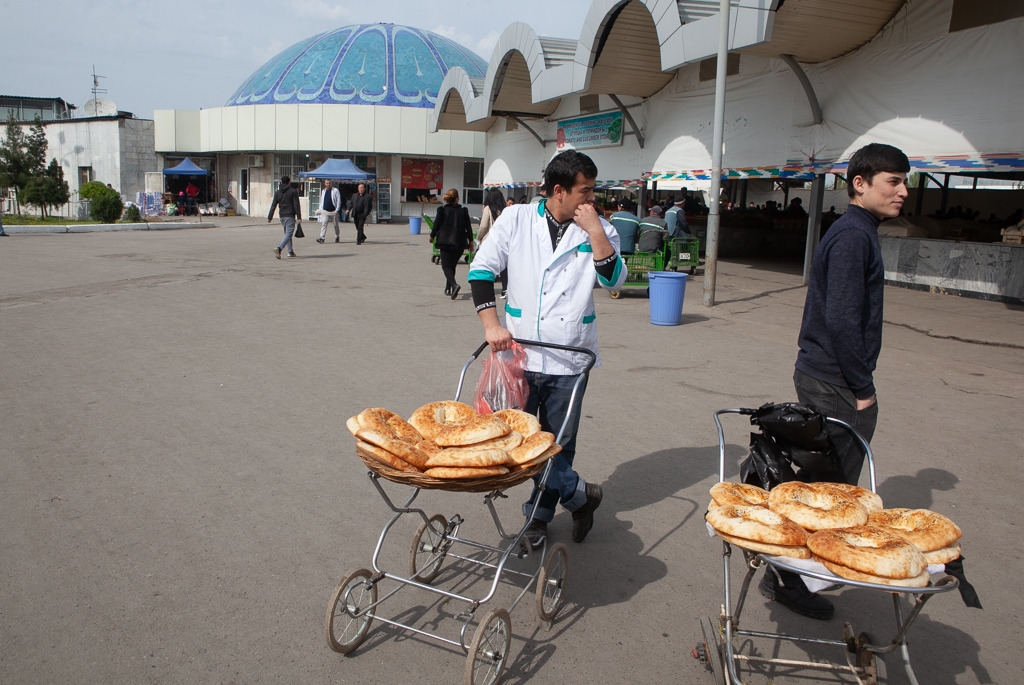 Bread often constitutes a meal in itself for poor Uzbek families. (David Trilling)

The price of bread, a staple for families in Uzbekistan, shot up dramatically this week after the government stopped subsidizing grain purchases with the war in Ukraine roiling global food supplies.

In Fergana, Podrobno.uz reported on June 2, a crowd stormed a store that had not yet raised its prices.

The average price for a bukhanka nationwide stood at 2,250 soms on June 1, the Anti-Monopoly Committee said. It urged the public to keep calm, and provided hotlines to report price gouging.

Bread occupies a central place on any Uzbek table, and, washed down with green tea, often constitutes a meal in itself for poor families.

So sacred is bread (“non” in Uzbek) that there are a host of rules about how it should be treated: Placing it upside down on the table is a faux pas, for example.

The price rises are alarming for Tashkent, given their potential to breed popular discontent.

With that in mind, the government used to subsidize bread prices to allow families to keep the staple on the table.

It ended subsidies in 2018, as part of market reforms enacted by President Shavkat Mirziyoyev, which included abolishing state regulation of flour prices the following year.

Officials argue that subsidies and price controls are an ineffective use of resources. They say market mechanisms deliver better results for producers and consumers, and make the agricultural sector more attractive to investors.

Now, with global grain prices skyrocketing and supply shortages looming because of the war in Ukraine, the government has ended state-subsidized purchases of grain in a bid to increase domestic flour output by incentivizing production for private millers.

“The current system is not profitable either for the grain grower or for the processing companies,” Mirziyoyev argued last month.

“When we started agrarian reform three years ago, we therefore announced the gradual abolition of the state order in the grain sector and the creation of a real grain market. […] However difficult this is, from June 1 we will move to market prices for the purchase and sale of grain by the state.”

Previously, Uzdonmahsulot, the state-run grain producer which has dominated the processing sector, produced flour from grain purchased at subsidized prices, giving it an advantage over private millers. As of June 1, all grain is sold on grain exchanges at market prices.

As the war in Ukraine roils global grain supplies and leads to higher prices, “the only correct way of assuring price stability is to increase supply on the market by assuring that farmers have an interest [in selling] and by raising productivity,” Mirziyoyev said. “For that the total introduction of market mechanisms is necessary.”

As proof that the private sector delivers better results, Mirziyoyev said costs for producing flour at state-run operations were 20-25 percent higher than private ones, while profitability was half. Uzdonmahsulot has run up 1.8 trillion soms, or $164 million, in debts, 1.1 trillion of which it has no hope of repaying, he complained.

Some 160 large private grain processors have opened over the last three years, according to Mirziyoyev. Private millers accounted for 54 percent of the 3.5 million metric tons of flour produced last year.

“Competition will emerge, and entrepreneurs will start striving for supremacy in quality and price,” the Ministry of Economic Development and Poverty Reduction promised this week.

It optimistically cited the experience of liberalizing flour prices in 2019, when prices initially spiked but then settled at market level.

How all this squares with the government’s own forecast that wheat prices will double this year compared to last was not explained.

Uzbekistan imported 2.8 million metric tons of wheat last year, according to official data. Most of that came from Kazakhstan. But Kazakhstan this year says it will keep more of its domestically grown wheat because Russia has banned its own exports, on which Kazakhs typically depend.

Mirziyoyev has made it clear he will be keeping a close eye on bread prices as his reforms take effect.

Reducing flour production or allowing “unfounded price rises under the pretext of the changes will be considered sabotage,” he warned last month.