Uzbekistan: Shining Light on the Uzbek Government’s Dark Side 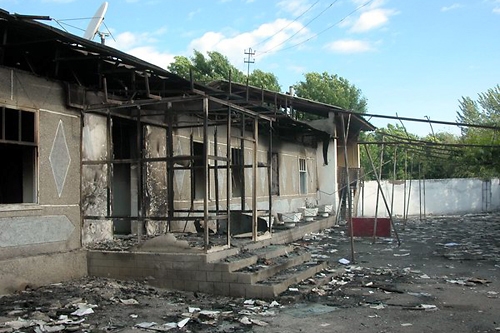 The arrest of a former Uzbek intelligence official may have been linked to his criticism of how the spring 2005 uprising of Andijan was not prevented. (Photo: EurasiaNet)

Uzbek leader Islam Karimov has taken cosmetic steps lately, such as voicing support for probing journalism, to try to put a more human face on his regime. But the true nature of the Uzbek government can be discerned in a treason case against a former military intelligence official.

Lt. Col. Sanjar Ismailov, a 43-year-old former acting head of Uzbek army intelligence, was arrested in late June 2005 and early the following year was convicted on charges of treason, abuse of power and illegal ammunition storage. He was tried in connection to a 2003 incident in which he shared information about Afghan militant groups with the Russian military attaché in Tashkent.

In appealing his conviction, Ismailov insisted that his actions were consistent with his official duties. Russia at the time was (and still is, sort of) Uzbekistan’s strategic ally, not adversary. And, Ismailov contended, the material that he passed along was encrypted and he needed the help of Russian specialists to crack it. To buttress his argument that he was acting with Uzbekistan’s best interests in mind, he pointed out that he handed over the information to the Russian official in the Uzbek Defense Ministry’s protocol room.

Ismailov’s wife, Natalia Bondar, has claimed that the charges against her husband constitute a case of retaliation. His troubles, she added, began after he criticized another senior Uzbek Defense Ministry official, who supposedly had been given information that Islamic militants were intent on fomenting an uprising in Andijan in the spring of 2005, but did not do anything with the information. The Andijan massacre in May 2005, subsequently embroiled Tashkent in international controversy.

An Uzbek military tribunal rejected Ismailov’s appeal in 2007. The following year, Bondar brought a complaint to the United Nations Human Rights Council, contending that her husband was deprived of basic rights during his trial and subsequent appeal. The council finally ruled on Ismailov’s case in March of 2011, and it was only recently that Bondar became aware of the UN body’s ruling, coming across it by accident while surfing the Internet. Part of the reason for the lag between the time when Bondar filed her complaint and the council’s decision appears to be the Uzbek government’s lack of response to UN officials’ requests for information relating to the case.

The council found that Ismailov’s rights were indeed violated: among the violations was the fact that he was not informed of the reason for his arrest, nor the charges against him, at the time he was taken into custody. The council also found that he did not have adequate time to prepare his defense and was improperly prevented from using privately retained legal counsel. [To read the council’s decision, click here].

The council mandated that it should “receive from the State party, within 180 days, information about the measures taken to give effect to the council’s views.”

Bondar told EurasiaNet.org that Uzbek authorities have taken no action that she is aware of to comply with the council’s decision. “The decision was made but nobody controls its fulfillment,” she said. “So things aren’t moving and nobody knows when everything will be solved. Our agencies, as always, get off with runarounds.”

The UN rights council lacks any mechanism to compel member states to recognize and implement its rulings. Human rights groups consistently rank Uzbekistan as one of the most repressive states on earth, and it should be noted that Ismailov case is far from an isolated occurrence. Hundreds, if not thousands of prisoners in Uzbekistan are believed to be estimated to be held on political grounds.

In late 2005, Ismailov had five years taken off what originally had been a 20-year sentence. But his chances at present for an early release appear slim, Bondar indicated. “He [Ismailov] is continually assigned responsibility for violations and, as a malicious violator, he is not covered by amnesties,” Bondar explained.

Ironically, the once high-ranking Defense Ministry official who Bondar alleges had her husband framed later was himself arrested on fraud charges and handed a nine-year prison term. But he was subsequently amnestied, Bondar added.

She is at a loss to explain why Ismailov remains a target of persecution. “Maybe everybody is afraid of taking responsibility for his release, or I simply do not know that another person who was interested in his arrest,” she said.

Marina Kozlova is a freelance journalist focusing on Uzbekistan.