Travel to China has grown harder in recent years, a period coinciding with Beijing’s crackdown on Muslims. 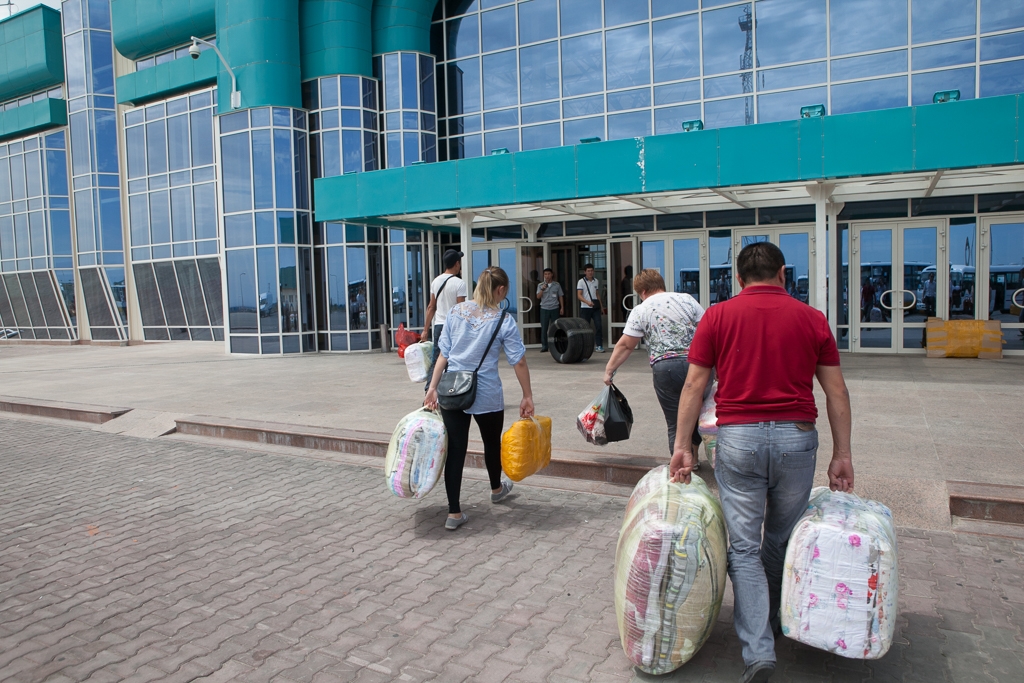 Visiting China used to be a breeze for Karim Muhammadhodjayev. The Uzbek trader spent more than a decade traveling to and fro, buying bed linens that he would later sell in bazaars back home.

Muhammadhodjayev’s livelihood came to depend on these trips, which he made four or five times per year. But about five years ago, entering China became tricky. Friends reported being deported from airports in Beijing and Urumqi. The Chinese Embassy would no longer grant the tourist visas he used. Until the pandemic shut down all cross-border movement a year ago, traveling on a visa as part of a group tour was the only option.

“It’s how [the Chinese customs agents] control us. If one person is missing from our group, they have a reason to keep us all back,” Muhammadhodjayev said of the change.

Muhammadhodjayev now owns a workshop in Tashkent. He uses Uzbek labor and Chinese textiles to make the same bed linen he used to buy directly from China. Though Uzbekistan manufactures raw textiles, those he buys in China are still cheaper than what he can find locally.

“Traveling [to China] is becoming more difficult, but I have to,” he said.

China is Uzbekistan’s top trading partner. The Central Asian nation imported $4.4 billion of goods from China in 2020 – primarily machinery and car parts, according to UN data – and sold $1.2 billion to China – mostly gas, cotton and metals.

Often lost in these figures is the scale of the shuttle trade. Markets in Uzbekistan are packed with affordable clothes, accessories and home goods sourced by small-time traders like Muhammadhodjayev. The Central Bank estimates these imports were worth $843 million in 2018. Though the bank does not break them down by source, a visit to any market makes it readily apparent that a large portion of these goods hail from China.

In Tashkent’s Hippodrome Bazaar, small shops feature windows filled with seasonal wear and accessories, mostly knock-offs of famous brands like Chanel and Christian Dior, all manufactured in China. Nearby, in a section where home appliances are sold, shop owners loudly advertise their wares as state-of-the-art “Beijing-made.”

“I go to Beijing to buy, so I only have the best,” said Bakhtiyor Galimjonov, the owner of a accessories store carrying handbags, jewelry and shoes. Shoppers regard items from Beijing as higher quality because they are “factory made,” Galimjonov explained, compared to goods from Urumqi or Guangzhou, which Uzbeks associate with sweatshops and poorer quality.

The pandemic has, of course, stymied travel, forcing Galimjonov to rely on “manipulative” middlemen in China who have pushed up prices. “That’s business, I guess.”

“But I still see a future with China,” Galimjonov stated firmly. “It will be my second home again when [the pandemic] ends.”

Efforts to investigate how many Uzbeks use these trade connections to work inside China were thwarted by a lack of available data. Uzbekistan’s State Statistics Committee told Eurasianet it keeps no record of Uzbeks traveling to China. The Chinese Embassy in Tashkent refused to discuss the matter with a Eurasianet reporter. Attempts to reach the Uzbek Embassy in Beijing failed.

Anecdotal stories from a handful of Uzbeks who have tried to get business visas, however, suggest the process is long, difficult, and rarely successful.

Miraziz Abdullayev tried for several years to open a logistics firm in Urumqi, the capital of China’s far-western Xinjiang province. Even with a Chinese business partner and having passed all the required medical tests, he was unable to secure the visa.

Like Muhammadhodjayev and Galimjonov, Abdullayev, who has traveled regularly to China since the late 1990s, used to rely on tourist visas. These were easy to obtain, simply requiring a one-time application fee of $60 dollars at a travel agent. An agent in Tashkent confirmed to Eurasianet that tourist visas have become “very difficult” to get. She said Uzbeks often overstayed their visas, which may explain the restrictions.

“I used [tourist visas] for all my travels, without a problem,” Abdullayev said. “About four or five years ago, it became very hard.”

Though it may be coincidence, four or five years ago is when Chinese authorities began arresting Muslims living in Xinjiang and sending them to internment camps. Roughly 1 million Uyghurs, Kazakhs and other Muslim minorities have been caught in the dragnet, which some Western governments are calling genocide.

The chill was palpable to regular visitors.

“I think the difficulty [of traveling to China] now is partly due to what’s going on in Xinjiang,” said Abdullayev. “[Uzbek] culture is very close to Uyghur culture. […] It’s my opinion that when [China] just suddenly restricted movements across its borders, that there might have been some political motivation.”

“I wouldn’t think about going to a mosque in China during my next few visits,” said Muhammadhodjayev. He added however that he didn’t observe any hostility from regular people, even though he wears a long beard.

Abdullayev believes there may be another reason for Beijing’s cooler attitude toward Central Asian traders.

“I’ve had many partners from all over the world tell me that Uzbekistan has the potential to rival China in manufacturing,” Abdullayev told Eurasianet. “I don’t think China looks lightly at that.”

Following the collapse of the Soviet Union, the scattered and inefficient factories in the newly independent republics fell apart. But more recently, Uzbekistan has increased domestic production, diversified exports and established new trading relationships. In 2000, the country exported around $2 billion worth of goods, mainly raw cotton, to countries like Russia, Ukraine and Italy. By 2019, the country exported goods worth around $15 billion. China eclipsed Russia as the country’s main trading partner back in 2015.

But as wages in China rise, developing countries with large, cheap labor forces – Uzbekistan, with a young 33.5 million people, has the largest population in Central Asia – threaten to take jobs. Uzbekistan can “be viewed as a potential rival by China,” said Farhod Inogambaev, an Uzbekistan-born Wall Street financier with a focus on emerging markets.

China’s strict surveillance of who enters the country might be “leverage” with Uzbekistan’s government, Inogambaev said. “It’s a way to make the country not easily accessible to its neighbors, especially those that depend on [China] economically and politically.” He also sees a connection to Beijing’s treatment of its own Muslims. Restrictions on Uzbek visas are “directly linked to the Chinese government’s concerns in Xinjiang,” he said.

Still, both Abdullayev and Inogambaev are emphatic that China is a vital partner.

“We will always do business with China,” said Abdullayev. “It’s a superpower and we need them. Not to admit that is foolish.”