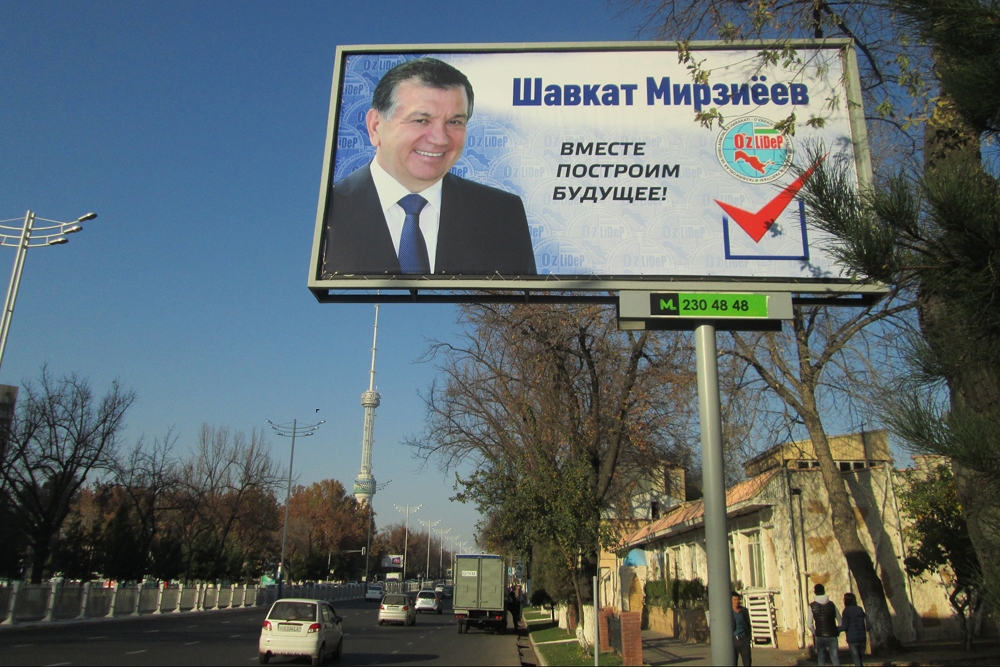 Of the four candidates running in Uzbekistan’s special presidential election on December 4, only one really counts — Acting President Shavkat Mirziyoyev. All the same, the campaign has been unusual in that it has given some prominence to the also-rans and, in the process, has paid lip service to competitive democratic practices.

While incumbent authorities have given no indications that they intend to implement substantive reforms to shake up the ossified political system, they are making concerted efforts to convey the impression of change.

Since Uzbekistan gained independence in 1991, Soviet-style elections have been the norm. Before his sudden death earlier this year, former president Islam Karimov stood for election on four occasions and received around 90 percent of the vote each time.

In addition to enjoying the advantage of incumbency, Mirziyoyev, who still formally holds the post of prime minister, has been subject of ample coverage on state television, as well as a fawning documentary. His election seems assured.

And yet, there are some novelties.

An Organization for Security and Cooperation in Europe (OSCE) monitoring mission has described electioneering as “moderately visible.” Those challenging the incumbent are able to convey campaign messages to the general population in ways that were not possible in elections under Karimov.

“Each contestant has 642 billboards displayed across the country and equal access to 36 electronic screens to broadcast campaign messages,” the OSCE’s Office for Democratic Institutions and Human Rights election observation mission said in its interim report on November 24.

Daily television news bulletins open with reports about the latest from the various election campaigns — a break from the Karimov era, when even the formal opposition candidates were broadly ignored by state media. Umarov and Ketmonov stood in the March 2015 election, the last presidential vote held during Karimov’s lifetime, but garnered less than 3 percent of the vote apiece.

Galiya Ibragimova, a consultant for Moscow-based think tank PIR Center, said that the goal of the election is to bolster not just the legitimacy of Mirziyoyev, but also to reinforce a political system in transition.

“This is why the political elite of Uzbekistan, who have reached a mutual consensus among themselves, are trying to carry out formally competitive elections and talking about the importance of further developing parliamentarianism, liberalization of the economy, reforms to the justice system and even the appearance of a pocket opposition force,” Ibragimova said. “There is an element of populism in this, but the main goal of such statements is to strengthen the legitimacy of the still-fragile post-Karimov system.”

Despite the cursory nods to greater transparency, some old habits remain strong. A senior employee for a state newspaper told EurasiaNet.org late last week that the several dozen foreign journalists that had been accredited to cover the election would be closely monitored.

“Groups of editors and deputy editors, together with translators and drivers, have been assembled to accompany every reporter,” the state newspaper worker told EurasiaNet.org. Accredited journalists will be met straight off the plane and accompanied for the entire duration of their stay, the newspaper worker said.

Presidential candidates have traveled widely in the regions to meet with citizens. They have tended to stress socio-economic issues, and have offered bromides about the need to increase the wellbeing of the Uzbek people.

Since Mirziyoyev is destiny-bound to win, the platforms of his ersatz rivals might be irrelevant, other than that they represent noteworthy reflections of public policy deemed open for discussion.

Ketmonov, 47, who is known popularly as the “standby” candidate, is typically viewed with derision, in part as his surname bears shades of nominative determinism. The Uzbek word “ketmen” refers to a farming implement for hoeing soil, which has led to gags at his expense of how he is used by the state the way one would an everyday household tool.

Ketmonov’s primary electoral theme has been to promote social equality and he has dwelled in particular on the plight of the disabled. In his campaign, he has proposed creating specialized enterprises that would provide employment for people with physical disabilities. Ketmonov has said that if elected, he would ensure decent wages for Uzbek workers.

Otamuratov, a trained sociologist born in 1973, has focused more on the idea of “national renewal,” and the idea of bolstering greater national self-awareness. His main practical proposal is for the Uzbek language to abandon Cyrillic script and adopt the Latin alphabet.

Umarov, the oldest candidate at 64, has emphasized broad access to education. If elected, Umarov has said he would overhaul the university admissions system and revise the mechanism for recognizing foreign educational qualifications. He has also said that too many key educational establishments are based in the capital, Tashkent, and that some should relocate to the regions.

Mirziyoyev, predictably, has the most detailed campaign platform of all. His main message has been to protect private enterprise and promote foreign investment. His pledge is to double gross domestic product by 2030 and bring the share of industry in the economy to 40 percent, up from 34 percent as registered in the first half of 2016. In his most eye-catching promise to date, he has pledged to launch 657 investment projects worth a total of $40 billion within five years. That would ensure the threefold growth of the textile industry and the more than doubling of pharmaceutical sector, he said.

Another pledge is to build 15,000 homes for low-income families in 2017 and make mortgages more affordable. In addition, Mirziyoyev wants to build 50,000 apartments in major cities over a three-year period.

Those promised undertakings notwithstanding, Mirziyoyev is clearly positioning himself as a champion of continuity.

“As the most experienced politician and a veteran of government administration, Shavkat Mirziyoyev well understands that stability and development in the social sphere are the main thing for the existence of Uzbekistan,” historian Maxim Matnazarov told EurasiaNet.org. “That why his election campaign has focused mainly on these two things.”