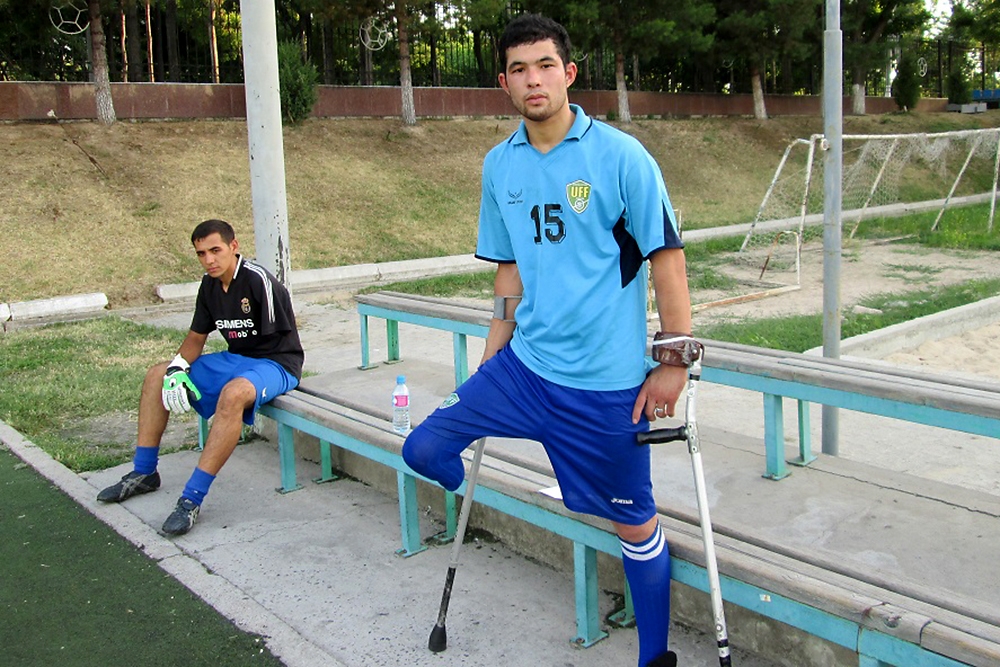 Zahid Tashkhojayev has a routine. Before he heads out for training with his amputee football team, he watches the news to put him in the moment. With his mental batteries recharged, Tashkhojayev says, he can face the future.

Tashkhojayev is a goalkeeper for Uzbekistan’s premier amputee football team, Matonat — the Uzbek word for courage.

“When I lost an arm in an accident, I didn’t know what to do. I became depressed. I didn’t know what it would all end with, but one day a friend called me and told me that there was a football team just for the disabled. The attackers, midfields and defenders all have one leg. The goalkeepers have no arms,” Tashkhojayev told EurasiaNet.org.

The amputee version of the game is in most respects identical to the regular variant. The field and goal are smaller, and the periods of play are shorter given the degree of physical effort required, but the levels of commitment and aggression are, if anything, often higher.

Amputee football was brought to Uzbekistan by an unlikely person at an unlikely time. American sports enthusiast Bill Berry was an experienced organizer of international tournaments for amputees when he decided to try his luck in Moscow in 1988. The Soviet military campaign in Afghanistan was reaching its conclusion and thousands of young men were returning home with life-changing injuries. Authorities in Moscow rebuffed Berry, however, claiming that there were no amputees among the Afghan vets.

Undeterred, Berry made his way to the capital of the then-Uzbek Soviet Socialist Republic, Tashkent, which was twinned at the time with his home city, Seattle. He thought Uzbekistan was a neat fit since many men from the republic had fought in neighboring Afghanistan. Around 65,000 Uzbek men had seen combat and many returned with limbs missing.

As Matonat veterans recall, Berry brought a load of light crutches so the young men could get to know the sport. Uzbek officials were more welcoming than their Moscow counterparts, and before too long, the Soviet Union had its first amputee football squad. Around nine-tenths of the squad were Afghan vets.

“I will always be grateful to Bill for teaching us how to play football,” said Pavel Suleimanov, an attacker and the only player still playing with Matonat from the 1988 team. Suleimanov lost a leg after stepping on a mine while serving in Afghanistan in the mid-1980s.

An Uzbek team went on a trip to Seattle in 1991. Fifteen players traveled to the US, where they met American fellow footballers and played against them.

In October that same year, Berry returned to Tashkent and organized a world amputee football championship. By that time, a team had been put together in Moscow, despite the earlier objections of Soviet officials. But the Moscow squad was not allowed to compete and its players were compelled instead to watch the tournament from the bleachers.

“So, you guys don’t have disabled people? I guess it means you don’t get to have soccer either!” Berry is said to have told the Muscovite visitors.

Tashkhojayev has been playing with Matonat for 25 years, making him one of the old timers. Being a goalkeeper is no easy job. “You forget yourself in the games. It happens in the dust of the battle that you might try and pick up the ball with a hand that’s no longer there, or kick the ball with a leg that has long since been amputated,” Tashkhojayev said. “Sometimes you make a pass and the ball goes astray and you cannot reach the ball because of physical limitations. But we train a lot and we have a tight schedule.”

The hard work has paid off and Matonat has won the world championship on several occasions.

The sport takes Matonat to locations all around the world, which can be tricky. In 2013, they were invited to take part in the Pobeda international tournament in Georgia’s breakaway region of Abkhazia. The players thought long and hard about whether they wanted to go, given the political complications. Ultimately, the team decided to make the trip to Abkhazia, where they were eagerly awaited by rivals wanting to get one over the then-world champions.

The Abkhaz tournament is remembered with pride by Matonat players, who managed to rack up seven wins over seven successive days — one by a remarkable margin of 47-9.

The pressing problem these days is finding willing young players to fill the ranks and somehow keeping up standards. The goal is to develop amputee football in other cities, beyond Tashkent.

“At the last world championships in Mexico in 2014, we lost to the Angolan team and we understood that we need fresh players,” said Matonat coach Jamil Shukurov. “If an internal league is not developed, it will be difficult to maintain the standard of Paralympic football."

Money is tight and finding sponsors to fund equipment is hard. Money for foreign trips comes from the Football Federation and the Culture and Sports Ministry. But players have to sacrifice their own money too.

“We need young players in the team. Many young people don’t want to play football. They’re afraid of the difficulties and only want to play for money,” said team veteran Suleimanov. “We play for ourselves, for our country, and so that amputee football can continue to exist.”

Matonat’s most promising young talent is 20-year old Zafar Nasyrov, who lost his right leg when he fell under a tram as a child. Ever since he was small, he has walked using prosthetic limbs and football felt like a distant dream, Nasyrov told EurasiaNet.org. With encouragement, Nasyrov overcame his fears and he is now the squad’s star player.

Matonat now has its eyes set on a tournament in September, in the Russian city of Nizhny Novgorod.

For Shukurov, the team’s coach, it is all about winning. “When you have victory, you have hope — hope that you can make it and that life goes on,” he tells his players.

It is an unsparing philosophy, but Tashkhojayev said the coach might have a point. “When I think about the next championship, about how cool it will be to beat the Russians and the Turks, it gives me a reason to live. I don’t know how to explain it. It isn’t that I suddenly wish to live, I don’t even think about that. I just live, like a regular guy, and I forget all about my missing limb,” he said.