Activists say the current registration process is designed to frustrate. 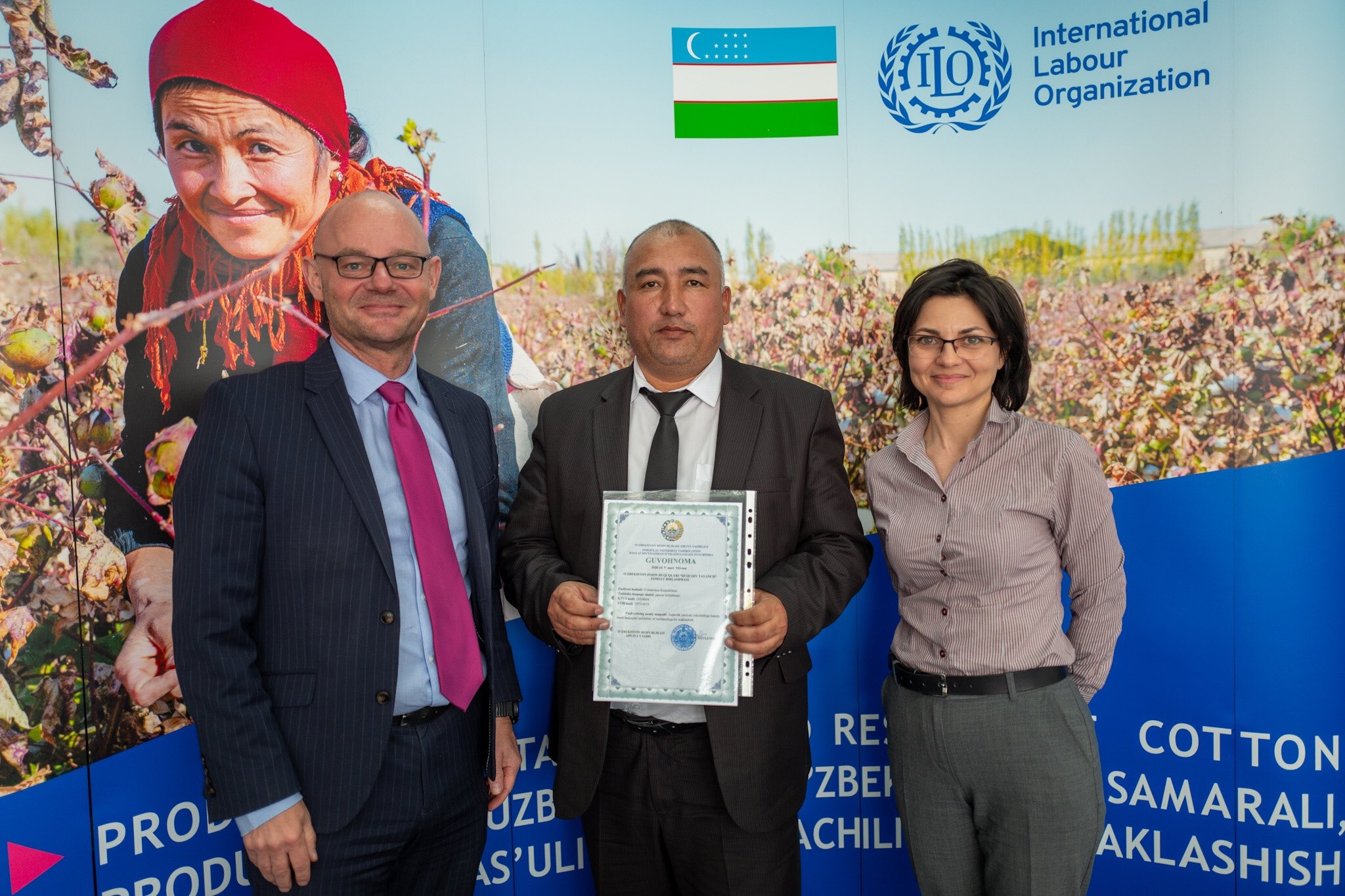 Azam Farmonov, center, the head of Huquqi Tayanch, showing his group's Justice Ministry registration papers as he meets with representatives of the ILO in Tashkent. (Photo: Jonas Astrup / Twitter)

Gazeta.uz news website cited authorities as saying on March 11 that Mercy Corps intends to pursue a project providing balanced nutrition to pupils at more than 400 pre-school institutions in the provinces of Karakalpakstan and Surkhandarya. The NGO suspended its operations in Uzbekistan more than a decade ago.

Perhaps more significantly, however, registration was given on the same day, on March 9, to a local group called Huquqi Tayanch ("Legal Support" in Uzbek), which focuses on criminal justice reform, according to independent human rights researcher Steve Swerdlow.

Swerdlow described Huquqi Tayanch as the first human rights group to be registered in Uzbekistan since 2003.

Organizations operating beyond the confines of full state control have historically been viewed with intense suspicion by Uzbek officials. But with President Shavkat Mirziyoyev, who came to power in 2016, signaling his intent to usher in sweeping political and economic reforms, it was hoped that the restrictions might be eased.

The slow pace of progress has frustrated activists, however.

The complications entailed in registered an NGO were amply documented in a January report by Dilmurad Yusupov and Oybek Isakov published on the Central Asia Bureau for Analytical Reporting website. The authors of the piece talked about “excessive bureaucratic hurdles, a lengthy registration process, language barriers, low legal literacy and absence of legal support combined with unwritten rules of ‘expertise’ [complicating] the formation of a genuine civil society in Uzbekistan.”

Yusupov and Isakov welcomed the reduction of registration fees and the creation of an online NGO portal created by the Justice Ministry, but they suggested that the problems all lay in implementation and the arbitrary rules that apply to activists operating outside the world of GONGOs (government-organized non-governmental organizations).

“On average, registration of NGOs takes from seven to more than 10 months. Initiative groups receive multiple rejection letters from the justice authorities and the number of such refusals can reach an average of four to more than 10,” they wrote. “If in the first refusal the registering authority reveals several shortcomings in the constituent documents, then in subsequent refusals, having received the same corrected documents, it refuses based on previously unspecified shortcomings.”

Huquqi Tayanch, for example, was registered only on its third attempt.

The government is, on paper, alert to the need to move things forward. There are currently public discussions taking place on the look of future legislation regulating the operation of NGOs.

And the subject of human rights, and the need to do more work in that direction, has started to be covered, albeit in dry terms, by state media. An article published on March 10 by state newspaper Pravda Vostoka dwelled on ongoing consultations between Uzbek lawmakers and a visiting delegation from the UN Human Rights Committee. Among the topics discussed were plans to work further on the registration of NGOs, as well as religious organizations. The article gave no specifics on the government’s plans.

Writing on Twitter, Yusupov was elated about the news of this week's registrations and expressed hope they were an omen for the future.

"Great news! I hope the new code on NGOs in #Uzbekistan will confirm this commitment for all self-initiated civil society groups by making the registration process less bureaucratic and transparent," he wrote.