A TV crew was filming a piece on a market fire when their footage was swallowed. 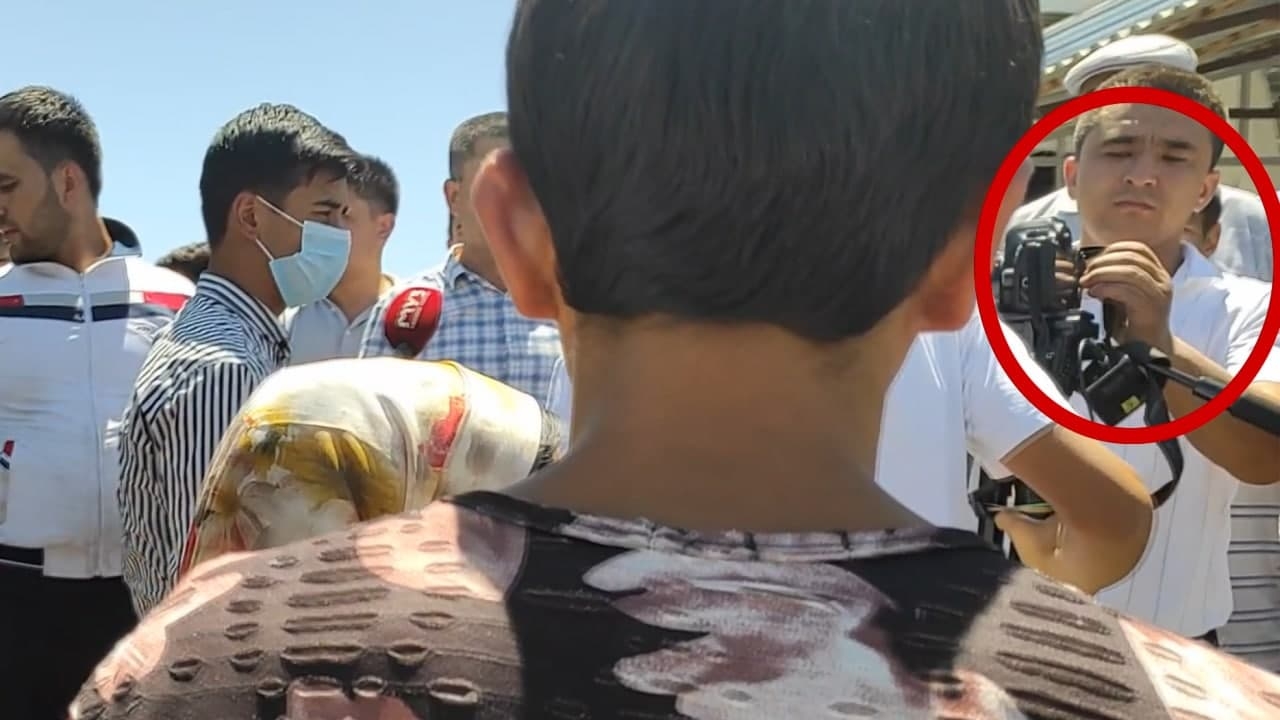 A Kun.uz image showing the moment that the spokesman got hold of the memory card.

A press service flunkey for a district official in Uzbekistan has resorted to an unusually extreme method for destroying potentially awkward journalistic material: eating it.

The scene, which played out in the Ishtikhon district of the Samarkand region, was caught on camera on June 14 while a MY5 television station crew was in the area filming a piece about a fire at local market.

The reporters arrived in the area and began interviewing officials, who promised that victims would be compensated. As they were doing so, however, stall owners whose goods had been destroyed turned up and vented their rage at the perceived ineptitude of the local government. The cameras duly turned on those residents.

Panicked, the spokesman for the Ishtikhon district administration, Ilhom Boboyev, sprung into action to save his bosses’ blushes. He got hold of the MY5 team’s camera, pulled out the memory card, and seemingly put it in his mouth, chewed and swallowed.

“The press service employee chewed or swallowed the memory card. I don’t know for sure, but my colleagues say that he put it in his mouth and chewed it,” an MY5 reporter told news website Kun.uz. “There was a lot of important material on there.”

Contacted by Kun.uz, the press secretary explained that the mood on the scene was growing tense and threatening to spill over into unrest. He did not appear to specifically explain quite why he resorted to chomping the memory card, however.

The Samarkand regional government has said it is looking into the incident and would take whatever action was required.

This episode, although hardly the most egregious case of interference in journalistic activity seen in Uzbekistan, even in recent times, illustrates the continued state of unease and distrust that exists between reporters and officialdom.

More troubling developments have occurred over the past year.

In May, a court in southern Uzbekistan sentenced citizen journalist Otabek Sattoriy to more than six years in prison after finding him guilty on charges of extortion and libel. Prosecutors had asked for an 11-year prison sentence at the end of the two month-long trial.

The verdict and sentence have been widely condemned by fellow journalists and international advocacy groups. An appeal is currently ongoing.

Later in the same month, correspondents from news website Effect.uz went on trial on charges of impeding a government representative from doing their work, interfering in an ongoing investigation and court procedures, libel, and insulting a public official.

The souring of conditions for reporting after a few years of gradual liberalization has been greeted with disappointment by press freedom advocates. Uzbekistan dropped one spot, to 157, in the latest edition of the Reporters Without Borders World Press Freedom Index. This has been the result of some stop-start developments, according to the group.

“Media registration has been made easier. There are now live political broadcasts and some journalists are now covering sensitive subjects such as corruption and forced labor,” RSF said in its 2021 World Press Freedom Index note on Uzbekistan. “But criticizing the highest level of government is still out of the question. And the authorities are in no hurry to carry out the necessary reforms to the laws that constrain the media.”