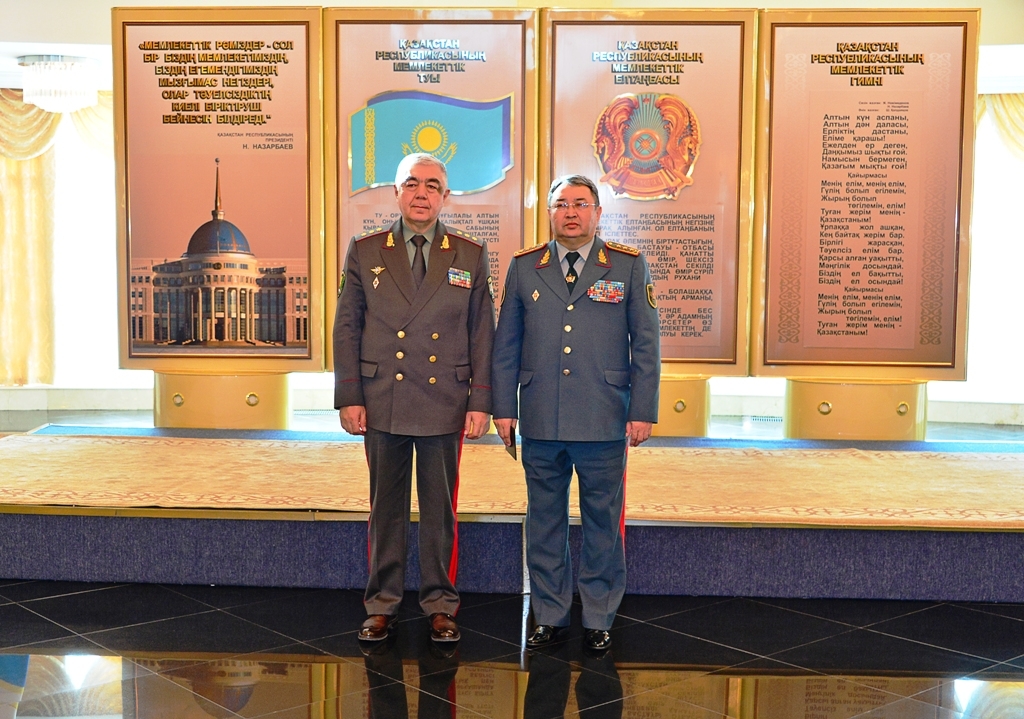 The defense ministers of Uzbekistan and Kazakhstan meet in March in Astana. (photo: MoD Kazakhstan)

Uzbekistan and Kazakhstan have steadily begun to build military ties, suggesting that Tashkent's thaw in relations with its Central Asian neighbors may even extend to such a sensitive area as military cooperation with its regional rival.

A high-ranking delegation, led by Uzbekistan's Deputy Defense Minister Atabek Ibadullayev, visited Kazakhstan on June 15 to look at a number of weapons manufacturers in the northern city of Uralsk. That follows the visit a week before of Defense Minister Kabul Berdiyev, while he was in Astana for a meeting of Shanghai Cooperation Organization defense ministers, to a plant of Kazakhstan's state defense firm Kazakhstan Engineering.

The delegation to Uralsk visited production facilities of armored vehicles and optical sights, and got demonstrations of other products including small arms and naval vessels. "Ibadullayev expressed interest in cooperation and acquisition of products and services of these factories," Kazakhstan's Ministry of Defense and Aerospace Industry reported.

This kind of thing would have been unheard of under former Uzbekistan President Islam Karimov, who kept all of his neighbors at arms' length, not least in military issues. While Uzbekistan didn't engage in saber-rattling with Kazakhstan, as it did on occasion with other neighbors Kyrgyzstan and Tajikistan, Uzbekistan has traditionally seen Kazakhstan as its rival for regional dominance.

Which makes it interesting that Uzbekistan now is apparently interested in buying Kazakhstan's weapons. The two countries' defense ministries signed a cooperation agreement during a visit by Karimov's successor, Shavkat Mirziyoyev, in a friendly visit to Astana in March. The next day, Berdiyev (a holdover from the Karimov cabinet) met his Kazakhstan counterpart, Saken Zhasuzakov, in Astana.

The Kazakhstan Ministry of Defense alluded to the potential novelty of Uzbekistan buying its weapons in its press release about the delegation: "It's necessary to note that all of the domestic military-industrial enterprises carry out their work in the interests of the armed forces and other formations of the Republic of Kazakhstan."