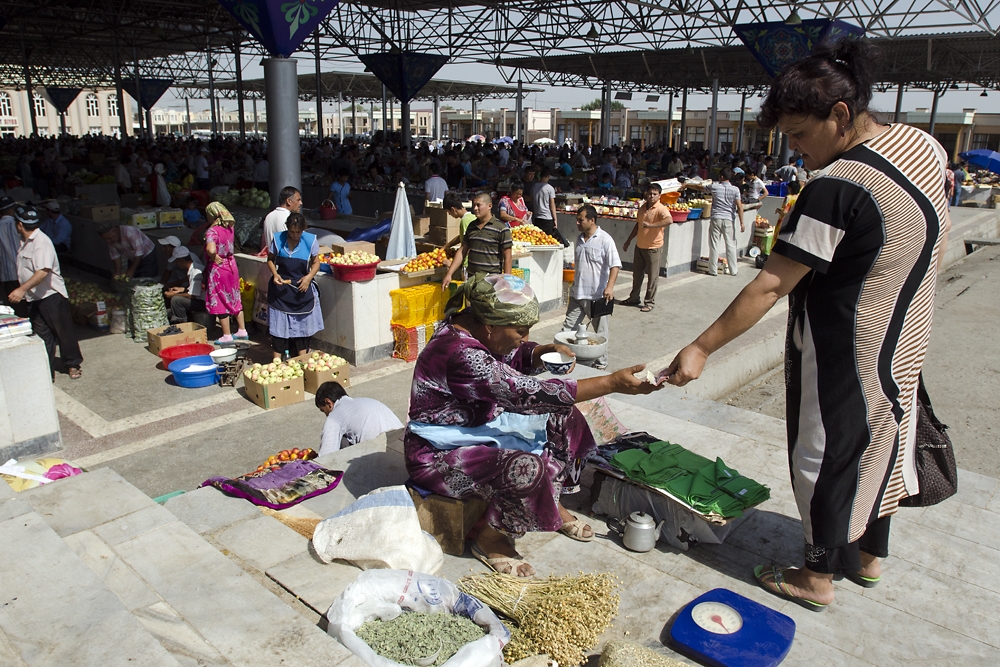 Back in the days of the fabled Silk Road, Samarkand was a byword for cross-cultural exchange. For hundreds of years, Tajik served as a lingua franca in this flourishing center of Persian civilization, situated in present-day Uzbekistan. But now, Uzbek authorities seem intent on ripping up the city’s Tajik roots.

By law, Uzbek is Uzbekistan's exclusive nation-wide state language. Government policy requires the use of Uzbek in all dealings with officials, in street signage, and in business and education. Russian is still spoken widely, however, and enjoys ambiguous legal status as “the language of interethnic communication." In the autonomous Karakalpakstan region, Karakalpak is a state language alongside Uzbek.

In Samarkand, where many people speak Tajik as their mother tongue, the language – a relative of modern Persian – has no official status. The government does not publish figures showing the number of ethnic Tajiks in Samarkand, but the state statistics agency says that countrywide they comprise about 5 percent of the total population of 30 million.

Figures published in the Ethnic Atlas of Uzbekistan in 2002 suggest that around a fifth of the country's ethnic Tajiks live in Samarkand Region. The atlas claims that the number of ethnic Tajiks is likely higher because some prefer to register themselves as ethnic Uzbeks, suggesting a pragmatic attitude that can help social and economic advancement, as well as a weak sense of ethnic and cultural identity among Uzbekistan's minorities. "The first reason seems more plausible because the status of titular ethnic group promises far more benefits than the status of ethnic minority," the atlas said. [Editor’s note: the Ethnic Atlas was published by the Open Society Foundations’ Uzbekistan office, which was shut by Uzbek authorities in 2004. EurasiaNet.org operates under OSF’s auspices].

Another factor impacting the use of Tajik in Uzbekistan is diplomatic tension between Tashkent and Dushanbe. Since the breakup of the Soviet Union in 1991, Uzbekistan and Tajikistan have had perhaps the region's most acrimonious relations, soured by disputes over water, energy and the treatment of minorities. Relations are so bad that Tajiks in Uzbekistan and Uzbeks in Tajikistan have been accused of spying on behalf of the other country. This acrimonious atmosphere also keeps families apart, with burdensome visa procedures hampering travel across the relatively new international border.

The problem dates back to 1924 when, upon the Soviet Union’s creation, Uzbeks and Tajiks were lumped into one administrative entity, the Uzbek Soviet Socialist Republic. That body contained a Tajik autonomous republic. In 1929, the areas of modern-day Tajikistan were split off to form the Tajik SSR, but the Uzbek SSR retained the traditionally Tajik-speaking regions of Samarkand and Bukhara.

It clearly irks Tajik President Imomali Rahmon that these once-illustrious centers of Tajik culture sit in Uzbekistan: in 2009, Rakhmon reportedly told journalists that he had threatened President Islam Karimov that he would take Samarkand and Bukhara back.

Stalin’s ruthless tendency to engage in ethnic, cultural and linguistic gerrymandering was not unique to Central Asia, of course, but it helps explain Uzbekistan’s official reluctance to accept Tajik. Even during the Soviet era, authorities in Moscow and Tashkent promoted Russian and Uzbek at the expense of Tajik. Efforts to turn Samarkand into an Uzbek-speaking city have merely intensified during the two decades since Uzbekistan gained independence in 1991.

"Who will nurture the Tajik language in Samarkand?" a local ethnic Tajik businessman asked rhetorically. “The state language is Uzbek."

While Tajik remained the language of choice for many Samarkand residents during the Soviet era, migration and state policy are steadily changing the city’s linguistic landscape. These days, there are hardly any signs written in Tajik, and there are limited opportunities for residents to educate their children or access media in their mother tongue, local Tajiks complain.

The number of schools with instruction in Tajik has been reduced to one mixed Tajik-Uzbek language primary school, an official from the Samarkand city Education Department told EurasiaNet.org. In Samarkand District, which includes the city’s suburbs (but not the city), there are four purely Tajik-language schools and 19 mixed Tajik-Uzbek schools, according to the regional Education Department.

Official figures for Tajik-language education in Samarkand and the surrounding region are not available, but an overall countrywide trend shows that the number of schools in minority languages is declining: There were 282 Tajik and mixed Tajik-Uzbek schools in Uzbekistan in 2004, down from 318 in 2001, according to the Moscow-based Federal Center for Educational Legislation.

The regional education department official told EurasiaNet.org that that minority Tajiks these days prefer for their children to receive an Uzbek-language education as it helps them get ahead. "Now, no one sends their kids to Tajik-language schools. Parents themselves prefer to send children to Uzbek- or Russian-language schools,” the official said, echoing an argument heard in southern Kyrgyzstan, where Uzbeks increasingly see the need for their children to learn Kyrgyz.

Samarkand State University also offers courses in Tajik in a range of subjects, from philology to physics, although few students are said to opt for them. "We have a department of Tajik philology. Everything is in Tajik there," a university registrar told EurasiaNet.org. "We have Tajik-language groups in the departments of physics, Tajik philology, math and biology. [...] But these groups are not big."

Education materials are another issue. Prior to Uzbekistan’s independence, Tajik-language schools were supplied with textbooks printed in Tajikistan. After 1991, Uzbekistan started publishing textbooks that conformed to its own curricula, leading to shortages in minority languages. "Books are published in Uzbekistan, rather than imported from Tajikistan because of the different school programs," the Samarkand city Education Official said.

Tajik increasingly exists in something of a vacuum in Uzbekistan, risking fossilization, according to Alex Ulko, a linguist and commentator on cultural affairs in Samarkand. It will likely survive, but not develop as a modern language, as Tajik is in neighboring Tajikistan.
Tashkent’s official position toward the language “is pretty strict,” but “inefficient,” Ulko told EurasiaNet.org. Minority languages “|are allowed to function where and when necessary, as long as it is informally,” he said.