When the Soviet Union was still around, people thought nothing of borders. Then independence got in the way. 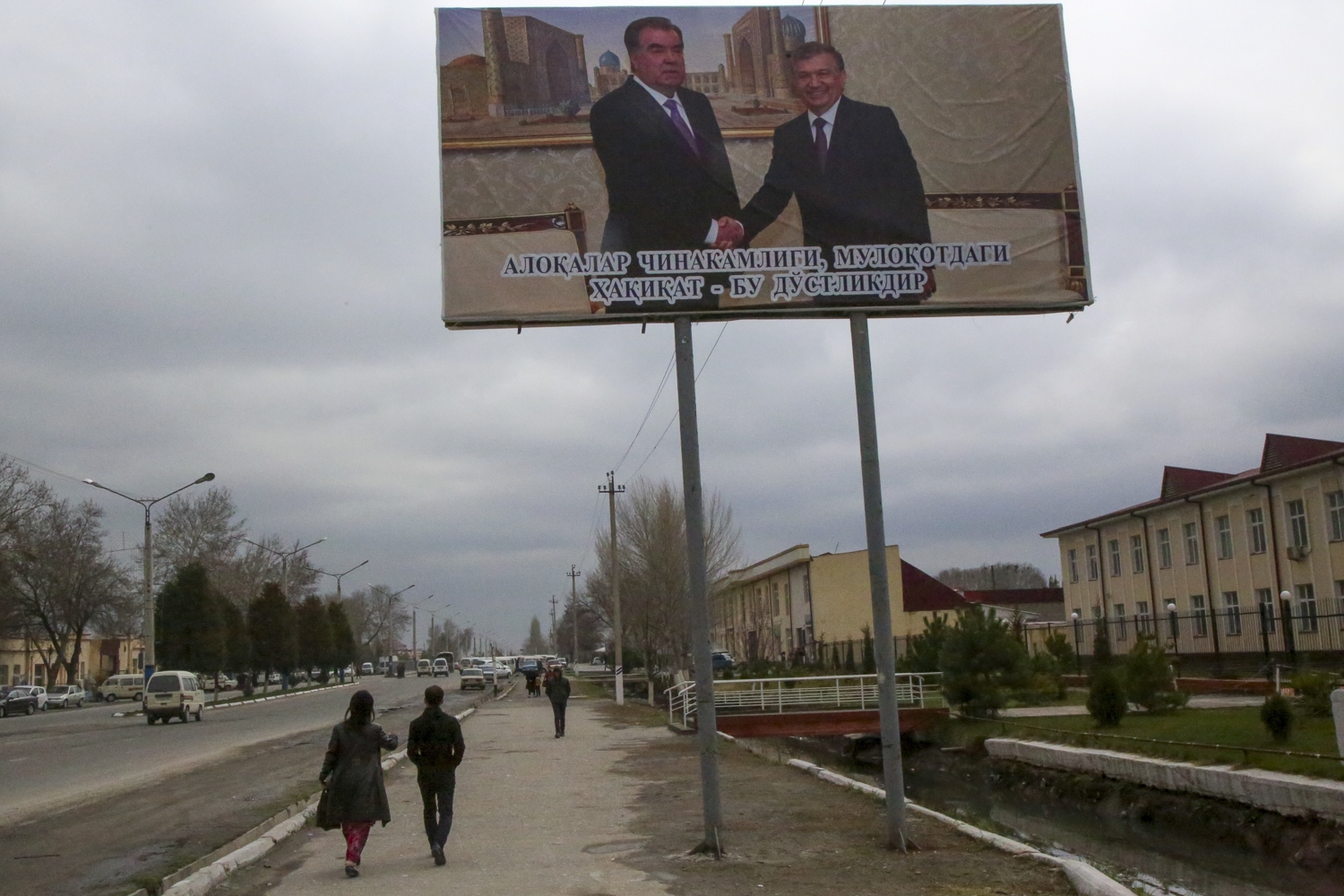 A billboard outside Samarkand showing the recent encounter between the leaders of Tajikistan and Uzbekistan. (All photos Eurasianet) 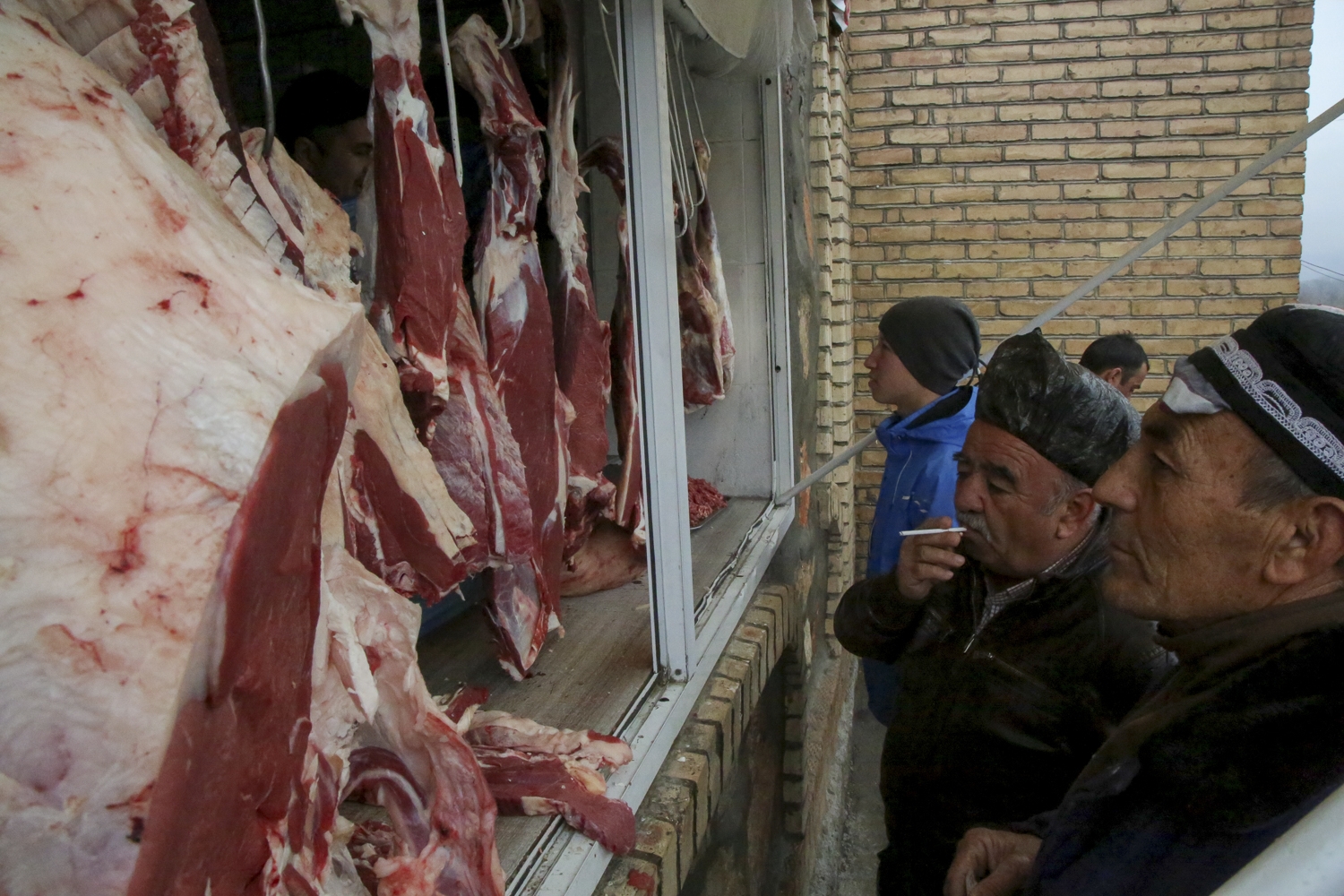 An open-air butcher in Panjakent, Tajikistan. 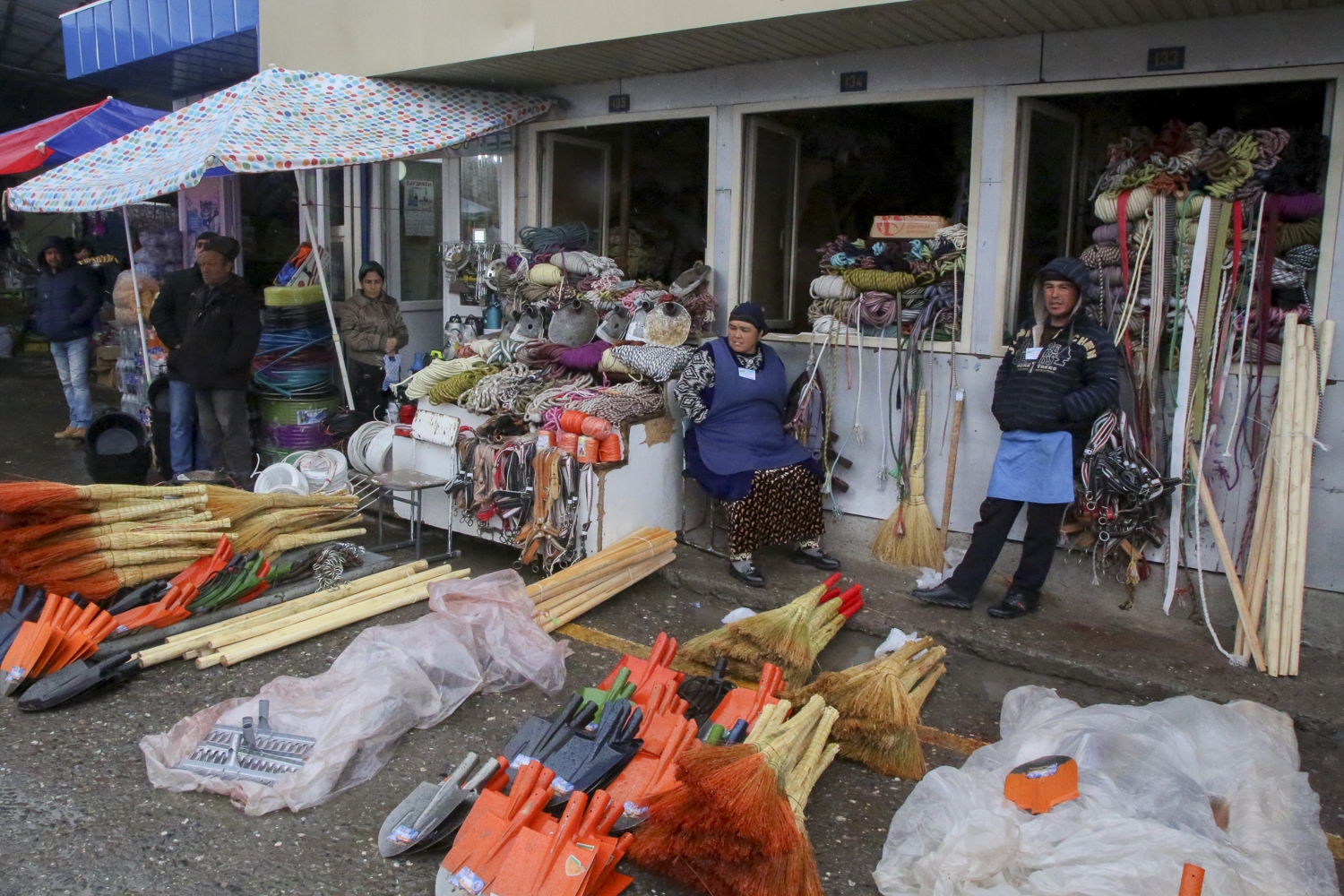 A trader at the Panjakent bazaar selling shovels recently brought over from Uzbekistan. 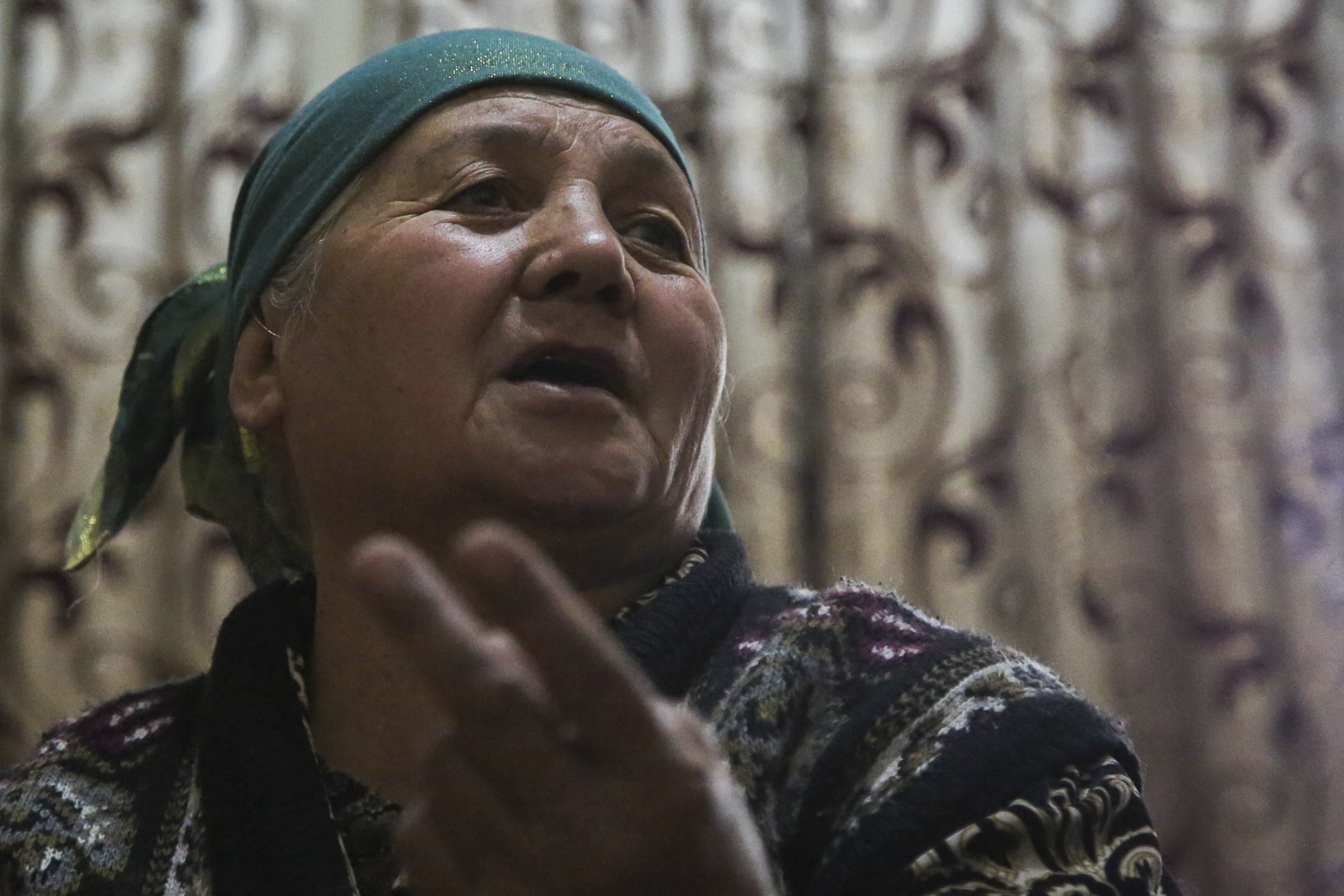 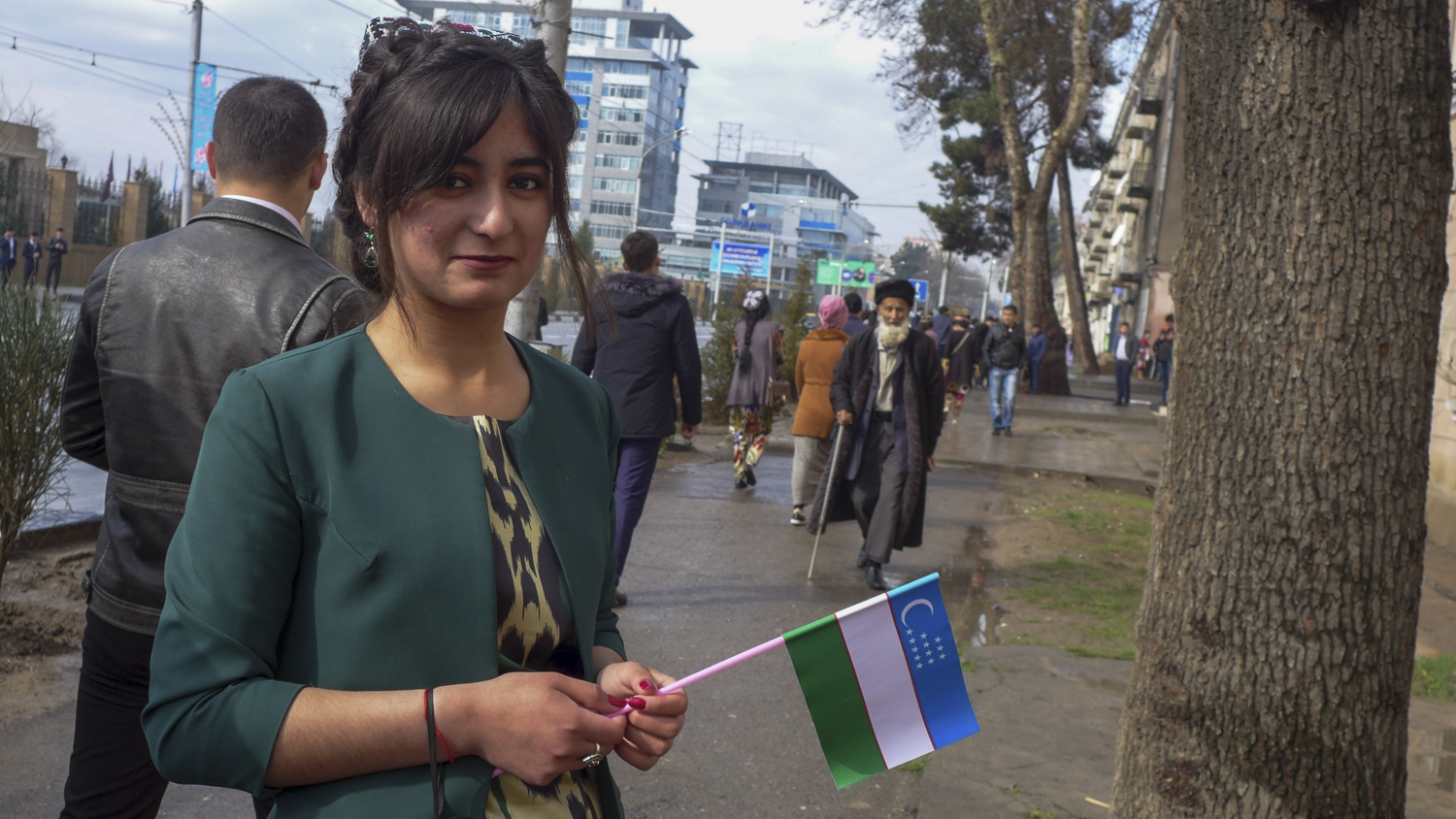 A Dushanbe university student carrying a miniature Uzbek flag posing for a photograph after the arrival in Tajikistan of Uzbek President Shavkat Mirziyoyev. 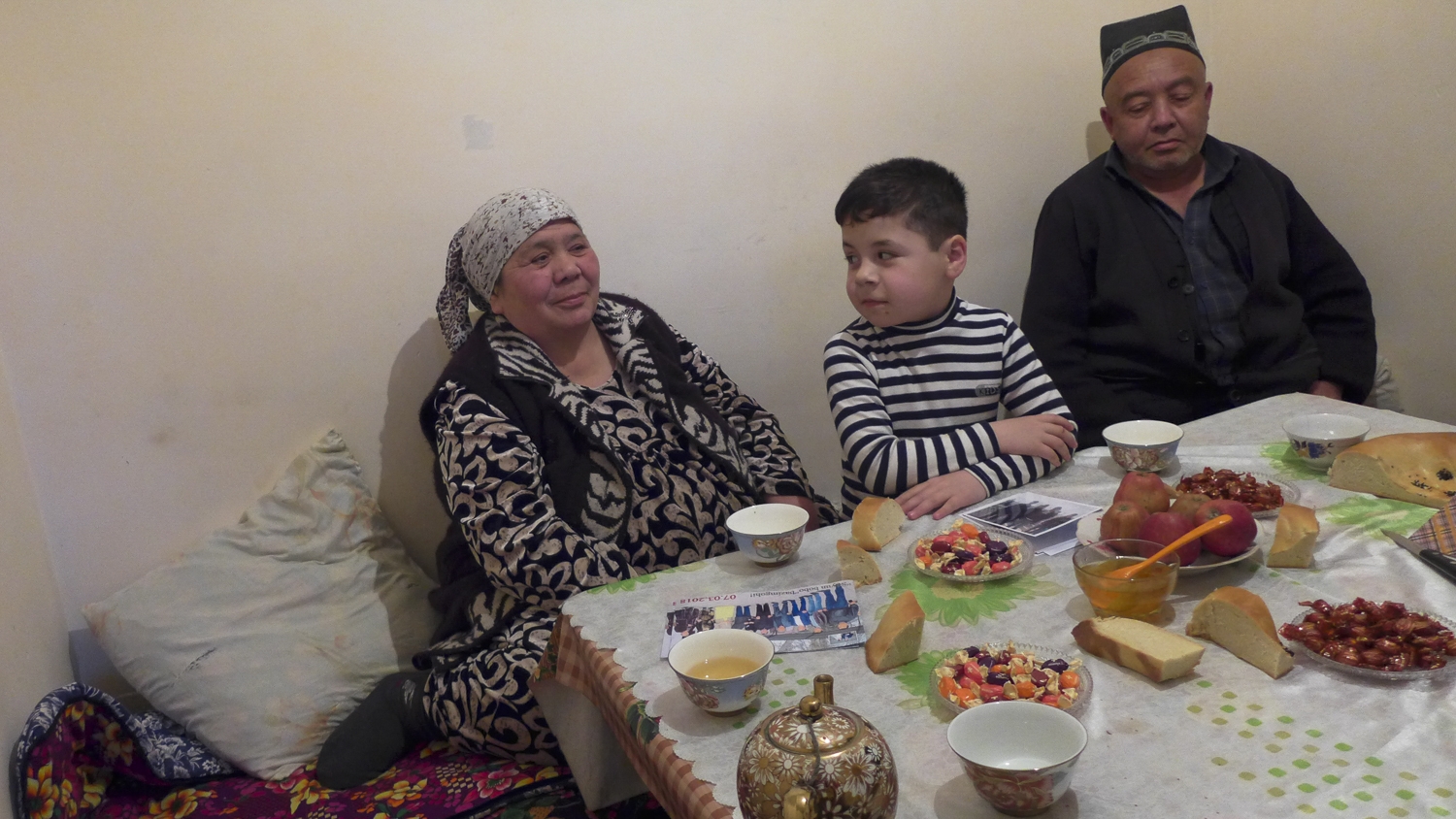 Robiya Rahmonova, left, at her home in Panjakent, Tajikistan, with her husband, Adham Haidarov, right, and one of their grandchildren.
prev
next

“And who are you?” Robiya Rahmonova asked expectantly one March morning when a stranger appeared at the gate outside her home in Panjakent, in northwest Tajikistan.

For three days, Robiya, a 58-year-old housewife with a ready smile, had been “expecting guests from Uzbekistan.”

When Robiya’s family heard the news and watched Mirziyoyev on TV hugging his Tajik counterpart and calling one another brothers, they cried with happiness.

“On television they said that there would be a visa-free regime between the countries. I am waiting for my relatives to come and visit,” Robiya said.

As it turned out, the excitement was slightly premature. The visas were not to be scrapped for a few days yet.

Every other family in Panjakent, a lively market town set in the Zeravshan Valley, has relatives across the border. Robiya has eight sisters and brothers in the village of Shopulod, in Uzbekistan, around 40 kilometers away as the crow flies.

Back in the old times, when the Soviet Union was still around, young people thought nothing of borders. Finding a spouse from a nearby town or city was in the natural order of things.

It was four decades ago that Robiya and her husband’s family arranged their nuptials. Their fathers were fast friends and both seasoned circumcisers. It seemed a natural idea to fasten this bond through marriage, although Robiya’s father was initially reluctant because the distance between their homes felt too far. But his guardian spirits tormented him for his prevarication — his children explain — interfering with his work as a circumciser, and he finally relented.

In any case, it was not too difficult to shuttle between homes. Buses then ran hourly along the route from Samarkand, in the Uzbek SSR, to Panjakent, in the Tajik SSR. A ticket cost one Soviet ruble, which in those days would buy fives loaves of bread.

“We didn’t know what a border was, what another state was. We visited one another without a thought. My siblings could come at lunchtime and leave in the evening. It is so unfair now. When we talk about Samarkand, my grandchildren ask: ‘Where is that anyway?’” Robiya said.

Robiya was the third of the nine in the family. Her closest sister was Mukarram, the eldest of the children. They weren’t just siblings, they were close friends.

And then history got in the way. The Soviet Union collapsed and a shared land became two countries. Over the years, the borders got harder.

“It all happened gradually,” said Mukarram, sitting in the living room of the family home in Shopulod, around a half-hour drive from Samarkand. “In the Soviet Union, we didn’t understand that we were crossing a border. Then they built a checkpoint. They began inspecting [documents]. Then they began wanting to see everything that we were carrying with us. The last time I went to Panjakent was in 2010.”

It was that year that the bureaucratic hurdles, most notably the mandatory visas, were given a concrete form in the shape of a three-meter brick wall erected by the Uzbeks across the border checkpoint.

“When they built the wall, all that was left for us was to cry,” said Mukarram.

Robiya has visited her relatives in Uzbekistan three times since 2010.

First she would have to travel to the Tajik capital, Dushanbe, where the Uzbek Embassy is based.

After a week or so of waiting, she would travel back up north through high mountain passes and cross into Uzbekistan at one of the only two border posts still in operation.

“That cost 500 somoni ($56) and a whole day. From here you should be able to stick out your hand and pay 20 somoni [to a taxi driver]. When my uncle died, because I didn’t have a visa, I could not pay my respects,” Robiya said.

The final sums of money involved are an onerous outlay for a low-earning Tajik household. Making the trip for a special event — a wedding or a memorial wake — would also entail the expense of obtaining a respectable gift, just another barely affordable luxury.

Robiya’s husband, Adham Haidarov, said that popping over to Uzbekistan used to be a fun and easy day out.

“Our Panjakent is nice too, but we would go to Samarkand for picnics. Young people used to go to hang out in Samarkand,” he said forlornly.

Matters took a turn for the better following the death in 2016 of Uzbek President Islam Karimov, who was actively hostile to bordering nations. His successor, Mirziyoyev, has by contrast actively pursued a good neighbor policy.

In a symbolic gesture of how relations have begun to blossom anew, on the first day of March, the border wall near Panjakent was ripped down. A little over a week later, Mirziyoyev flew to Dushanbe for a two-day visit that produced a visa-free agreement and several economic deals.

People living near the border in Tajikistan immediately began putting their mind to what line of trade they could get into. For people living in Panjakent and nearby, going to Samarkand will become considerably simpler than a trip to Dushanbe or even Khujand, Tajikistan’s second-largest city, in the north. Before, many thought in terms of importing wares from as far afield as Istanbul, but Uzbekistan now presents a more appealing alternative.

For the time being, entrepreneurs are still in the stage of taking stock of opportunities.

One trader at Panjakent market, a circular high-walled hubbub of commerce set against an imposing mountain backdrop, told Eurasianet that he had crossed over to Uzbekistan without waiting for the visa-free regime to come into force and returned with a haul of shovels to sell. He seemed a little disappointed, however, reporting that similar items from Istaravshan, a northern Tajik town famed for its metalwork, were of much better quality.

Border guards have adapted quickly to the changes. Passage through the border takes a handful a minutes, a vivid contrast with the times when gruff Uzbek customs officials would often force travelers to unpack all their bags and account for all the contents. When Eurasianet correspondents made the crossing, one Uzbek official in plainclothes asked meekly to check a mobile phone for extremist content or pornography, but demurred immediately when challenged.

It is a 20-minute drive from the border to Shopulod, where Robiya grew up. The village is a patchwork of small enclosed farmsteads. It took only a few quick enquiries of passing villagers to track down the Rahmonov family home.

Like her sister, Mukarram, 63, was quick to raise her hopes.

“When they said that the border was being opened, that very day, I took my children and grandchildren to the border. But it turned out that there were still formalities stopping us from getting across,” she said.

All the family agrees that it is the Uzbek side’s turn to make the trip. When the nearest border crossing was closed, it made more sense for Robiya to undertake the roundabout trip. After all, she was alone, while for the whole family to go the other way would have been a major operation.

“Every time she came we would hold a tui,” Mukarram said, referring to the banquet held to mark special events like birth and weddings. “We would be in tears taking her back to the border. Now it is our turn to go. She will play the host.”