If expectation meets reality, Tajiks could one day do more trade with Uzbeks than with Russians. 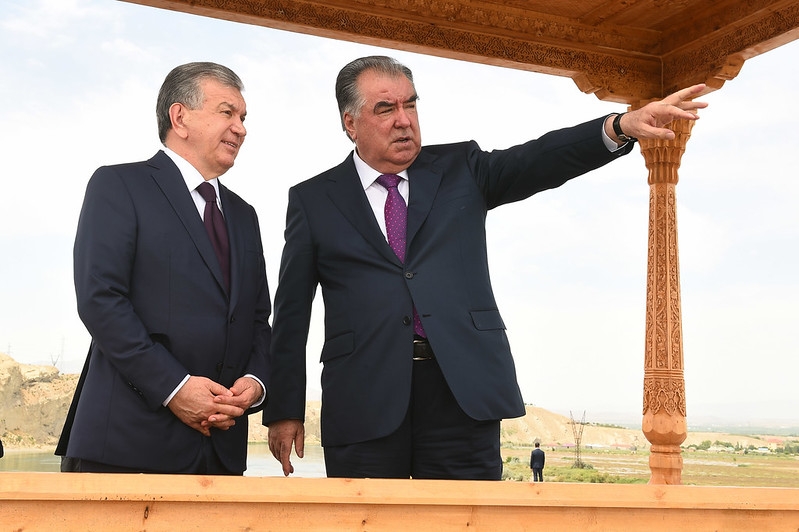 Looking into the future: Mirziyoyev and Rahmon visiting a hydropower plant in northern Tajikistan on June 11. (Photo: Tajik presidential administration)

Uzbekistan’s president was met this week with pomp and ceremony in Tajikistan at the start of a three-day visit that produced pledges for more than $1 billion in commercial deals and joint projects.

It is a stark turnaround in affairs from only a few years ago, when the former fellow-Soviet neighbors viewed each other with barely disguised suspicion.

“Uzbekistan is a strategic partner and a reliable neighbor,” Rahmon said in a speech of welcome. “We are glad that today Tajik-Uzbek relations are developing dynamically. Trade and economic ties are expanding.”

The mood had been set the day before at a maiden Tajikistan-Uzbekistan investment forum attended by around 300 businesspeople in the southern Tajik city of Bokhtar. Uzbekistan’s Foreign Trade Ministry said in a statement that the event produced business deals worth $730 million.

Sectors of industry involved in the tie-ups include automobile, electronics and household appliance manufacturing, high-yield agriculture and food processing.

Uzbek officials also announced that a joint investment fund furnished with $50 million in capital has been created to promote “the implementation of promising joint projects.”

Asia-Plus newspaper cited Uzbek Deputy Prime Minsiter Sardor Umurzakov as saying that 200 Tajik investors are present in the Uzbek market, while 60 companies with Uzbek capital are investing in Tajikistan.

The extensiveness of the border and the shared heritage and culture should make Uzbekistan and Tajikistan natural partners, but the relationship had for decades been characterized by distrust. The late Uzbek dictator Islam Karimov viewed Tajikistan as little more than a potential source of regional instability. He was especially discomfited by Tajik plans to build a huge hydropower plant, which Uzbek officials worried would compromise their country’s agriculture.

The ascent of Mirziyoyev to power in 2016, following Karimov’s death, brought about a radical transformation. Memorable images from Mirziyoyev’s first state visit to Tajikistan in March 2018 included him striding hand-in-hand with Rahmon down the red carpet rolled up to the steps of his plane.

The scenes were no less jubilant on this occasion. Dozens of women in colorful traditional dress were arrayed on the runway. Men outside the airport hooted their long karnay trumpets accompanied by young boys bashing out a rhythm with tambourines. Young people waving flags of the two countries lined the road from the airport.

At a tete-a-tete event in front of cameramen and photographers in the Palace of Nations, as the official presidential residence is known, the two men showered one another with mutual praise and hopes for the future.

“If we are going to talk about bilateral relations, the figures speak for themselves. If in 2017-18, we had $70 million in bilateral trade, in the difficult year of the pandemic, what we saw for the first time was bilateral trade at $500 million. This tells you a lot,” Mirziyoyev said.

The Uzbek government has said its ambition is for that figure to reach $1 billion, which, for context, is more trade than Tajikistan currently does with Russia.

The two governments are eager to make the relationship appear to be about more than money.

On the evening of June 9, during a concert held under the title of “Friendship Evening,” Rahmon presented his Uzbek colleague with a first-order Zarintoj (Golden Crown) state award in recognition of “impeccable services toward strengthening interstate relations.”

Earlier, Mirziyoyev and Rahmon had remotely inaugurated a 250-bed medical treatment facility built in Tajikistan’s Khatlon region by Uzbekistan and a three-story school for 640 students built by Tajikistan in Uzbekistan’s Samarkand region. Both those regions have large ethnic Uzbek and Tajik communities, respectively.

Protocol events included the inevitable signing of bilateral deals – 35 of them in fact – covering areas such as energy, transportation, mining, light industry, education, sports and culture. One notable initiative is the formation of a joint-stock company to build a 320-megawatt hydroelectric power station on the Zarafshan River in Tajikistan.

All told, accounting for private and state sectors deals, more than $1 billion in pledges were signed, according to the Tajik presidential administration.