Tajiks are offering the troops a haven, but the Uzbeks are taking a firmer line. 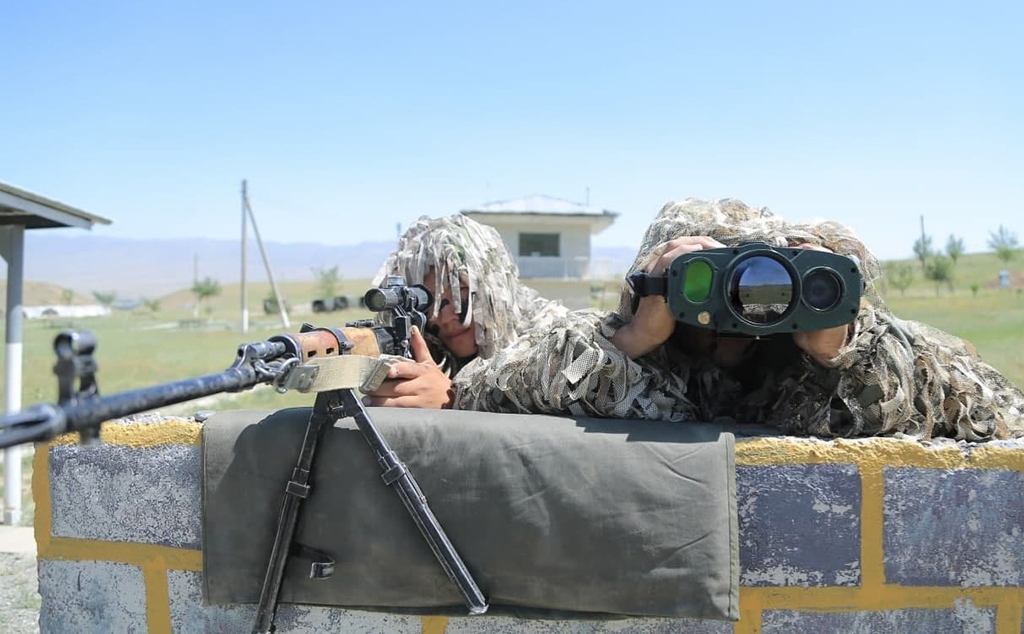 Uzbekistan is not allowing Afghan troops to cross to safety. (Uzbek Defense Ministry)

The isolated cases of Afghan government troops seeking refuge across the border in neighboring Tajikistan and Uzbekistan are now becoming a commonplace occurrence, according to officials in those two countries.

On the morning of June 27, an armed group of Taliban militants launched an attacked on a border checkpoint in Afghanistan’s Kaldar district, forcing 17 Afghan troops to flee, Tajikistan’s state news agency reported.

The troops entered Tajikistan through its Shahrtuz border outpost. The Shahrtuz district is in the very southwestern corner of the country, where the border intersects with Uzbekistan and Afghanistan.

This was the second time in less than a week that Afghan troops had to seek a haven on Tajik soil. On June 22, more than 130 soldiers escaped across Shir Khan Bandar border crossing after coming under a sustained assault.

“As a result of the armed clash, which lasted until 9 a.m. on June 22, 134 Afghan government troops unable to withstand the offensive were forced to retreat … into the territory of Tajikistan,” the Tajik security services said.

On both occasions, Tajik border personnel admitted the troops in what official statements have described as gestures of “humanity and good neighborliness.”

Uzbekistan has taken a firmer line against escaping Afghan troops, warning them that they are violating international law by crossing the border without approval.

A spokesman for the presidential administration in Tashkent said on June 28 that there had been several such attempts in the previous few days.

The only incident about which some scant details have been revealed occurred on June 23, when 53 Afghan soldiers and militiamen crossed with their weapons from Afghanistan’s Shortepa district, which lies along the Amu-Darya River, into Uzbekistan.

“Between that and today, several more such attempts were undertaken,” the spokesman, Sherzod Asadov, was quoted as saying by Interfax news agency.

Asadov said that all people seeking to enter Uzbekistan have, in accordance with domestic and international law, been returned to Afghanistan.

“The inviolability of the border of Uzbekistan should not be questioned in any way,” he said.

While adopting different policies on the fugitive troops, Uzbek and Tajik authorities are coordinating to some degree in the face of the increasingly unstable situation along the border.

The Taliban have been registering notable successes or been engaged in fierce fighting across several Afghan provinces – Faryab, Jowzjan, Kunduz, Balkh, Takhlan and Badakhshan, which variously border Turkmenistan, Uzbekistan, and Tajikistan, respectively.

The Taliban appeared to have been emboldened to further their momentum following the announced drawdown of the roughly 3,000 U.S. troops that remained in Afghanistan. In April, U.S. President Joe Biden said that a pullout would last until September 11 – a timeframe that he argued did not constitute a “hasty rush to the exit.”

There have, however, been recurrent reports that U.S. officials are seeking to persuade partners in Central Asia to provide basing options as a way of leaving U.S. forces the means to engage in military operations in Afghanistan if and when the need arises. As reported, the facility is conceived as being something along the lines of the bases at the U.S. had at their disposal in Uzbekistan and Kyrgyzstan following the 9/11 attacks. Those bases were vacated in 2005 and 2014, respectively.

Defense officials in Uzbekistan in May indicated a marked aversion to this proposal, although it is far from certain the idea has been entirely removed from the table.

Uzbek Foreign Minister Abdulaziz Komilov on June 27 traveled with a delegation to the United States for a working visit due to last until July 4. Although the brief statement on the trip did not detail which officials are traveling with Komilov and what areas are to be discussed, it is almost certain security will feature prominently on the agenda.

An interview granted by Komilov to U.S. journalist Dennis Wholey before the trip, however, may not be seen as encouraging to Washington. He pointedly made the case that the solution to Afghanistan’s woes should not be sought through force.

“We must know about Afghanistan that there is no … military solution,” he said in the English-language interview.

Komilov argued that while there could be no question of accepting a return to the kind of theocratic rule that the Taliban imposed upon much of Afghanistan in the 1990s, compromise would need to be pursued.

“We think that this problem must be solved on the base of mutual compromise between the existing government and the military opposition, the Taliban and others,” he told Wholey.