“Uzbeks and Tajiks are like two branches of one tree, like two banks of one river,” Uzbekistan’s president told his visiting counterpart. 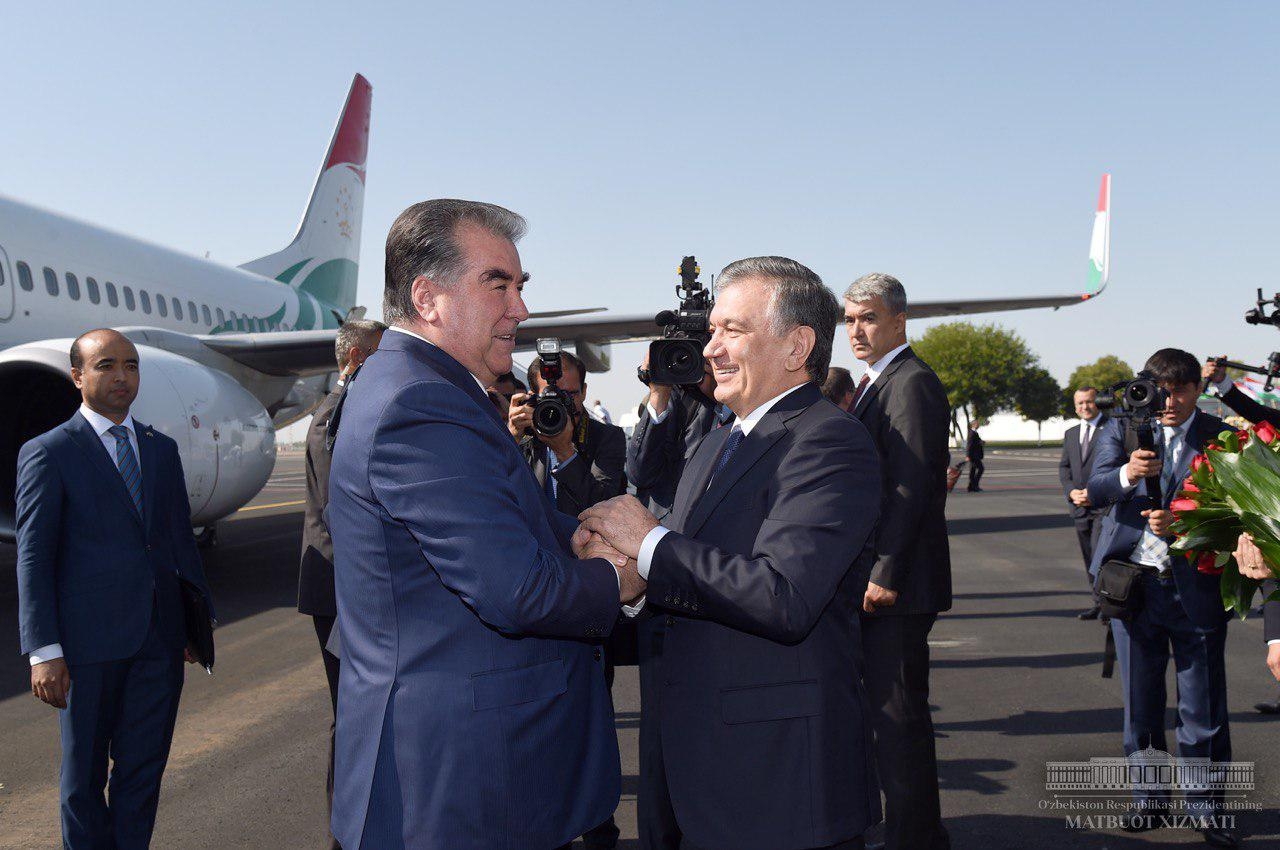 For the first time since coming to power in the early 1990s, Tajikistan’s President Emomali Rahmon traveled to Uzbekistan on a state visit.

The occasion was billed as a historic, and even unexpected, breakthrough that would put to rest decades of ill-feeling between the fractious neighbors.

“Who could have imagined this one-and-a-half years ago?” Uzbek President Shavkat Mirziyoyev asked rhetorically at a banquet event on the first evening of the visit.

The tone was set as soon as Rahmon stepped off his plane August 17 onto a green carpet unfurled at Tashkent international airport, where he was met in person by Mirziyoyev. The pair immediately clinched in a tight embrace. Similar gestures of affection would be exchanged repeatedly throughout Rahmon’s two-day stay as the presidents routinely addressed one another as “dear friend” or “brother.”

“The main world players are busy with problems like Syria, the United States pulling out of the nuclear deal with Iran, and there is the ongoing issue of Ukraine,” Mamadazimov told Eurasianet. “They are all busy with other problems, and so the region is dealing with its own issues. All the initiatives have come from the region itself and are being supported by the local population.”

In diplomatic terms, the most momentous document to emerge from the visit was the bilateral Strategic Partnership Treaty – an accord that will at a stroke turn the uneasiest of neighborships into what will on paper be a robust alliance.

“The decision to upgrade interstate cooperation to a higher level of strategic partnership is a natural and logical result of the huge positive changes seen in our relationship,” Rahmon said, following one-on-one talks with his Uzbek counterpart.

Another 27 bilateral governmental agreements addressed cooperation in industry, education, border security, agriculture and much else.

The bad feelings between Tajikistan and Uzbekistan have their roots in a number of long-standing recriminations. One stemmed from Tashkent’s unabashed interference in the civil war that tore Tajikistan apart in the 1990s. Most grievously, that involvement was aimed at backing foes of the regime in Dushanbe.

In more recent years, Uzbekistan has been a staunch opponent of Tajikistan’s potentially epoch-defining Roghun hydroelectric dam. Tashkent has argued that the creation of the dam could imperil its agricultural heartland and that Tajikistan has no right to unilaterally exploit a shared water legacy. Uzbekistan has softened its rhetoric significantly on this front, however, even suggesting that it could get involved in the multibillion-dollar Roghun project.

In a more modest gesture of intent, Mirziyoyev signaled on August 17 that Uzbekistan would participate in the construction of two hydroelectric stations on the Zeravshan River in Tajikistan. The river rises in the Pamirs and flows into a high-walled valley in northwest Tajikistan and further into Uzbekistan, north of the city of Samarkand.

“We will build them together. The power produced will be sent to both Tajikistan and Uzbekistan,” said Mirziyoyev, speaking about two mooted 300-megawatt plants.

“I have said many times and in many places, and I want to repeat it once more – we will not leave our neighbors without water,” he said.

Pressing this point further, Rahmon said that both countries are jointly looking at how to exploit resources from Lake Sarez, a lake deep inside the Pamir Mountains that was formed by a massive earthquake in 1911 and now holds approximately 17 cubic kilometers of water.

“We could use water from Sarez to supply drinking water to the region,” Rahmon said.

The glowing language has already translated into firm results, going by the two leaders’ account. Rahmon said that trade had doubled in the first half of 2018, as compared with the same period a year earlier, although he provided no figures.

More firm was news that companies from the two countries sealed 17 commercial agreements collectively worth more than $600 million during this state visit.

A lot has been done on that front by an Uzbekistan-based white-goods company called Artel, which retails directly on the Tajik market and has been advertising intensively.

Rahmon was taken for a tour of the Artel factory in Tashkent and, according to the Uzbek presidential administration, “noted the quality and price competitiveness of Uzbek goods.” In truth through, consumers in Uzbekistan seek, whenever possible, to buy Chinese goods, which are typically cheaper.

Tajikistan wants goods to flow the other direction too. But the Made in Tajikistan fair held in Tashkent to coincide with Rahmon’s visit suggested items going toward Uzbekistan will be mainly low-tech industrial materials, such as coal, aluminum and cement. Goods that even the Tajik government freely admits are the product of an import-substituting agenda – beverages, canned goods, dairy and meat products – will likely have trouble gaining a perch in Uzbekistan.

In any event, a day of pleasantries was capped by the Evening of Friendship concert, which brought together performers from both countries. It was there that mutual greetings reached an apogee of effusiveness.

“Uzbeks and Tajiks are like two branches of one tree, like two banks of one river, our land and water is as one, we have one holy religion,” Mirziyoyev.

In that spirit, the second day of Rahmon’s visit took him to the historic city of Samarkand.

Much ink has been spilled by government-endorsed Tajik historians grumbling about the injustice of Samarkand and Bukhara, two eminent centers of Persian language and culture, being claimed in Soviet times by the Turkic Uzbek SSR rather than the Persian Tajik SSR. Rahmon has himself in the past, only half-secretly, played to the gallery by claiming that Tajikistan would one day take the cities back.

While in Samarkand, Rahmon was taken on a touristic whistle-stop tour. He posed for a photo in front of the famous Registan square with something that was half-smile, half-grimace. The sightseeing also took in visits to the graves of possibly the two most famous leaders of Uzbek history, Tamerlane, and Rahmon’s arch-enemy, the late President Islam Karimov. It was the latter’s death in September 2016, as it happens, that led to the improvement in bilateral ties.

Mamadazimov, the analyst in Dushanbe, cautioned that although great strides have been made, there are some details that need resolving.

“There are some mined areas [of the border]. This throws a shadow on the full-scale rapprochement. When the de-mining ends, then we can say that there are no problems left between the countries,” he said.