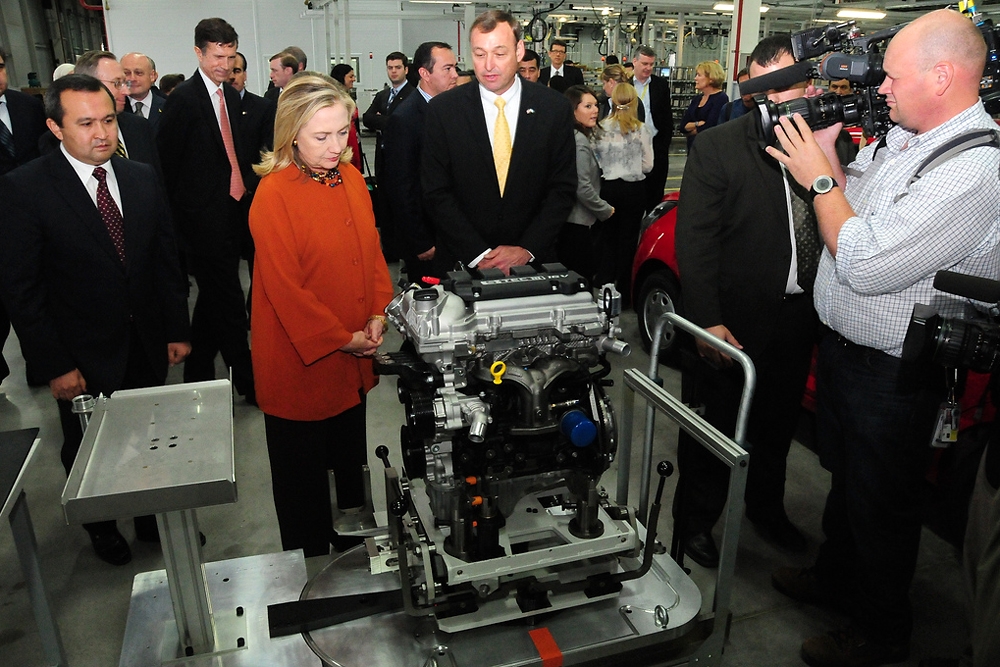 Clinton gets a close-up view of a GM automobile engine manufactured in Uzbekistan and sold throughout the CIS region. (Photo: US State Dept.)

Uzbekistan has taken a pounding recently over its human rights record, but financial wizards in Washington have measured praise for Tashkent’s economic performance, and at least some American executives remain upbeat about doing business in the Central Asian state.

Rights watchdogs rank Uzbekistan as one of the world’s most repressive states, while transparency advocates describe the country as a sinkhole of corruption. Meanwhile, Western buyers are boycotting Uzbek cotton in response to the Uzbek government’s systematic use of forced child labor to harvest the cash crop.

Uzbekistan, mainly because of its strategic position as a transit hub for a vital Pentagon resupply line to Afghanistan, retains more than a fair share of supporters in Washington. The cheerleader-in-chief is US Secretary of State Hillary Clinton, who on a recent visit to Tashkent, effusively thanked Uzbek leader Islam Karimov for Tashkent’s participation in the Northern Distribution Network.

Karimov’s critics would like to see the United States and European Union brandish a big stick at Uzbekistan, conditioning all forms of engagement on improved behavior out of Tashkent. So far, however, Washington and Brussels prefer to toss carrots at Karimov as an incentive to change.

Fans of the big-stick approach held an impromptu convention in early September on the streets of New York, mounting a protest against the efforts of Gulnara Karimova, the president’s daughter, to stage a runway event in connection with Fashion Week. They succeeded in getting Karimova booted off the official Fashion Week program, and, in the process, gave Uzbekistan’s international image a black eye.

The carrot crowd gathered late in September in Washington for the annual US-Uzbekistan Annual Business Forum. The attendees included government officials, business representatives, and think-tank experts. The main message to come out of the meeting was: US investors risk missing out on a good opportunity in Uzbekistan, due to ongoing global economic challenges. Rights concerns and corruption were factors that participants skated around.

Some experts have cautioned that the Karimov administration’s tight control over economic activity inside Uzbekistan is throttling growth opportunities and produces only hollow, unsustainable gains. In addition, Forbes Magazine didn’t even bother to rank Uzbekistan on its 2010 list of “Best Countries for Business.” Even so, cautionary voices were muted at the Washington forum.

According to Takuya Kamata, who heads the World Bank’s resident mission in Tashkent, one reason Uzbekistan has been a strong performer economically is the country’s ability to “leverage its natural endowments with late-comer advantages.” At the same time, Kamata gingerly pointed out areas for improvement. If Uzbekistan wants to become a “high-end middle-income economy,” Kamata argued that Uzbek authorities need to address deficiencies in many key areas, including infrastructure, education, macroeconomic policy and transparency.

Shukhrat Vafaev, managing director of the Uzbekistan Fund for Reconstruction and Development, stressed that US businesses could find opportunities in the Uzbek energy sector, including sales of technologies for gas processing and energy conservation.

According to Uzbek calculations, oil, gas, and petrochemicals represent more than half of Uzbekistan’s future economic activity. But the country’s central location is also useful for pursuing regional commerce. Arturo Elias of General Motors noted that GM sells automobile engines that it manufactures in Uzbekistan throughout the CIS region. He attributed GM’s success in Uzbekistan partly to the strong support that the corporation receives from the Uzbek government, which provides tax breaks and other preferential benefits.

Speakers at the Washington forum did acknowledge several challenges in Uzbekistan for foreign investors, including problems with converting currency, securing long-term visas for foreign employees, and an opaque government procurement process.

In examining Uzbekistan’s security environment, Martha Brill Olcott, a senior associate with the Russia and Eurasia Program at the Carnegie Endowment for International Peace, downplayed concerns about Islamic militant activity. Although the last few years have seen instances of Islamist terrorism, most regional governments have significantly increased their counter-terrorism capacities, resulting in a net decrease in their vulnerability. In her view, the main challenge facing Uzbekistan is dealing with Russia’s economic contraction and transitioning to a new generation of political leaders by creating “political institutions that not solely tied to the personality of the president.”

When asked by EurasiaNet.org what the US government could do to promote a favorable business environment in Eurasia, S. Frederick Starr, who heads the Central Asia-Caucasus Institute at Johns Hopkins University, said the US government needed to remain engaged in the region even after American forces leave Afghanistan. He added that a continuing US presence would act as a balance against Russia. He went on to express concern about Russian Prime Minister Vladimir Putin’s likely return to the presidency, describing the prospect as “not good” for Central Asia since Putin has pursued a “very, very tough” stance toward the region.