Try surfing in landlocked Uzbekistan? Or maybe check out the dolphinarium in Tashkent, a city 2,000 kilometers away from the nearest ocean? Why not? 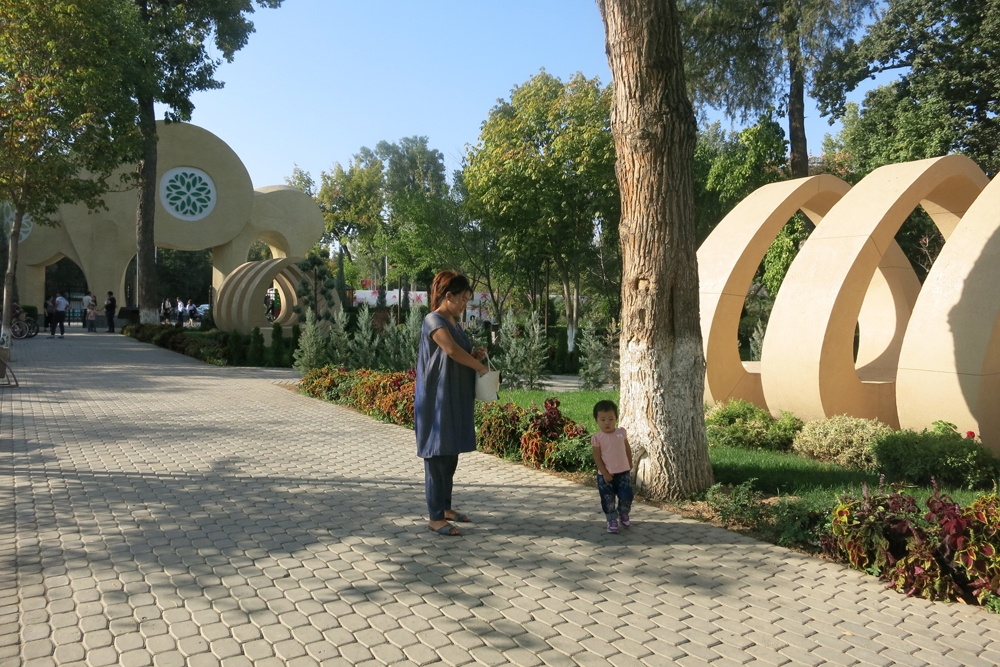 A young woman takes a walk with her toddler in Tashkent’s Eco Park in mid-September. While Tashkent residents tend to be hopeful about the authorities’ city redevelopment plans, some watchdogs and activists are raising questions about contract allocation practices, environmental issues, as well as the government’s overall top-down approach. (Photo: Joanna Lillis)

Try surfing in landlocked Uzbekistan? Or maybe check out the dolphinarium in Tashkent, a city 2,000 kilometers away from the nearest ocean? Why not?

These are some of the more colorful aspects of an ambitious plan to transform the Uzbek capital’s Navoi National Park into a more people-friendly venue. The plan also includes construction of a flashy shopping mall and an amusement park.

Elsewhere, this kind of development might be run of the mill, but in Uzbekistan it marks a noteworthy departure. The apparent priority for Tashkent under President Islam Karimov, who died in September 2016, was to deter large groups of people from gathering in any one spot, even if merely for leisure. Roads were closed off as a security measure, trees were chopped down along a once-shaded, popular pedestrian thoroughfare, and traffic ground to a halt for 30 minutes each day as Karimov’s motorcade sped between his city center office and his countryside residence.

Money is pouring into this urban renewal initiative, which has been given the nod by the reform-minded President Shavkat Mirziyoyev.

While Tashkent residents tend to be hopeful about the plans, some watchdogs and activists are raising questions about how the lucrative contracts for the makeover are being awarded, as well as who decides what is done.

“They’ve already selected the implementing contractor without any kind of tendering process,” Alisher Ilkhamov, an Uzbekistan analyst at the Open Society Foundations’ London office, told EurasiaNet.org, adding that officials developed the plans without receiving outside input. “It’s another example of a kind of opaque deal which has been done behind closed doors, which is one done without any kind of consultation with the population.”

The company chosen by the authorities to lead the Navoi Park redevelopment is Stargate Systems. A search on the internet for this firm leads to Uzbekistan’s AKFA group, a conglomerate with wide-ranging interests in construction, door frames and fittings, and light bulbs.

Stargate Systems, which is reportedly investing some $60 million into the project, was forced into the limelight after an online backlash from environmental campaigners and animal rights activists, who have railed against not only the tendering process, but also the potential for the cutting down of trees and the exploitation of dolphins.

“We took our concept to the city administration and the culture department, outlining the amount of investments, all the stages. The project was studied and approved,” AKFA’s financial director Kamola Mirzaaliyeva, who is also managing the Navoi Park project, told Gazeta.uz in Tashkent on September 21 at a hastily arranged news conference to calm the online storm.

“We have absolutely no intention of cutting down all the trees in the park,” Mirzaaliyeva said in a bid to reassure green activists. Mirzaaliyeva even promised her company would plant more trees.

No mention was made at the news conference of any other tenders that City Hall had received for the park redevelopment project.

While Ilkhamov welcomed this online “awakening of public opinion” — which observers say would have been impossible under Karimov’s repressive regime — he noted that there are no “nongovernmental organizations operating on the ground which would raise these issues and negotiate with the government.”

A stroll around Tashkent reveals that the atmosphere in Central Asia’s most populous city has become noticeably more relaxed in the year since Karimov’s death. On a balmy Saturday evening in the middle of September, crowds of young people filled a landscaped area of fountains and benches to the west of the grandiose white marble Palace of Forums, built by a firm associated with Gulnara Karimova — the disgraced daughter of the late president.

Some of Tashkent’s once rundown public spaces have been given facelifts. For example, the former zoo, which was originally home to the Czarist-era Governor General’s private menagerie, has taken on a new existence as an Eco Park. The zoo’s entrance, shaped like a stylized concrete elephant, is the sole reminder of its erstwhile role.

“It’s a unique park in the city. No other park looks like this one. It’s pretty, a very green park that has a nice pond and all kinds of places for people of various ages, for children, for adults,” Tashkent businessman Dilshod (not his real name), who was visiting the park with his nine-year-old son, told EurasiaNet.org.

After the zoo closed its doors in the 1990s, the site was abandoned for two decades before being repurposed earlier this year. Now it hosts Tashkent’s first dedicated bike path, a walking path and paid-for attractions, including tennis and badminton courts, a space for yoga, an outdoor gym and a beach volleyball pitch.

At the heart of the park is the “Island of Love”, accessible only by paying a fee to the park administration. A lone couple in a rowboat having a photo-shoot were the only takers on the Saturday evening EurasiaNet.org was visiting.

Another ambitious project is Tashkent City, a collection of futuristic high-rise residential and commercial buildings that authorities hope will send a signal to the world that Uzbekistan is well and truly open for business. This project poses a sterner test for city officials as to how they incorporate public input. Unlike reconstructing a park or opening roads, this scheme entails clearing a whole residential area in the city center and rehousing the inhabitants before construction can begin.

Mirziyoyev has declared 2017 the year of “dialogue with the people.” Yet the public grumbling over the Navoi Park redevelopment plan indicates that his administration is on a steep learning curve when it comes to ensuring dialogue is indeed a two-way process.

Nevertheless, many in Tashkent are happy to see signs that the authorities are thinking about how to make their city more livable for ordinary people – even if the implementation so far seems mostly top-down. “I’m very happy that the president initiated all this construction of parks, roads, houses. I think everyone is glad about it,” said Dilshod.