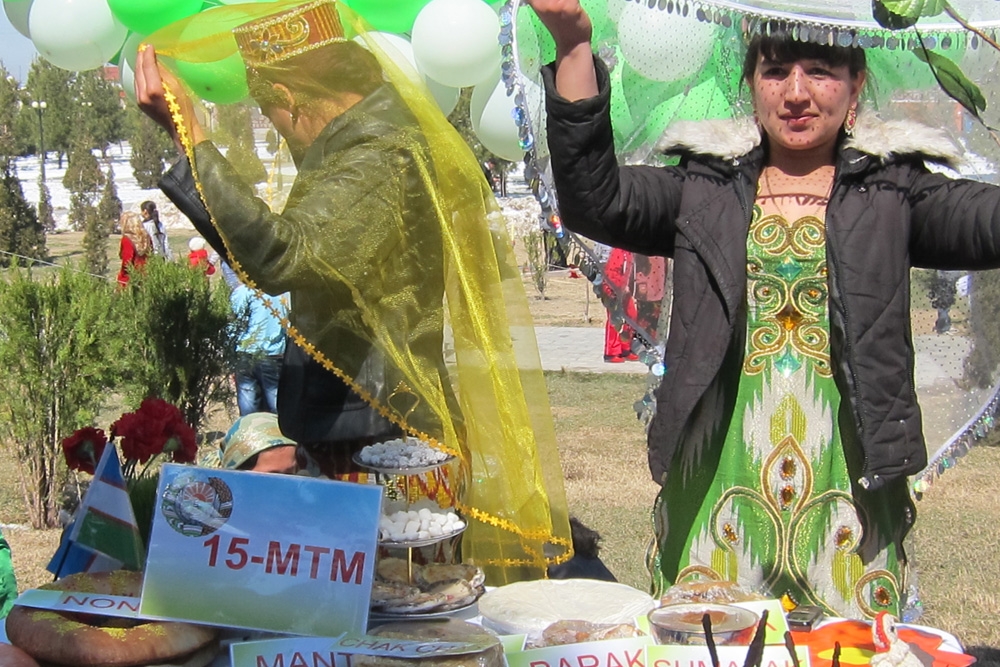 A behavior code defines the kind of clothing deemed appropriate to wear in Uzbekistan. (Photo: EurasiaNet)

Mahfuza, a mother of three in a small town in the Ferghana Valley, has better things to do than spend her afternoons at crowded, smoke-filled Internet clubs. But as a high-school algebra teacher, she has an extracurricular assignment from her bosses: she must monitor the clubs’ clientele – many of them her students – while they play computer games, surf social networking websites, and watch music videos.

A decree from Uzbekistan’s government last spring obliged teachers like Mahfuza (she asked her last name be withheld to protect her from possible reprisals) to frequent Internet clubs to ensure students do not fall prey to supposedly subversive ideas. She’s not thrilled about the task.

“Students spend so much time playing games featuring violence, such as a [first-person shoot-‘em-up] game called Counter-Strike, and chatting with complete strangers online. Parents don’t seem to care, and the burden falls on us, poor teachers,” Mahfuza told EurasiaNet.org.

But Mahfuza has no choice. "The state pays our salaries, so we must comply with their rules even if we find them distasteful,” said a vice principal at the secondary school where Mahfuza teaches. He also spoke on condition of anonymity, fearing retaliation for criticizing authorities.

President Islam Karimov’s administration has long relied on educators to shield Uzbekistan’s youth from what it considers dangerous outside influences, including religious radicalism and independent political ideas. (The government keeps a tight lid on all forms of political expression, and even mainstream opposition groups are banned and operate in exile). A series of popular uprisings in the Arab world in 2011, which were partly fuelled by social media, have heightened Tashkent’s concerns, prompting authorities to view pop culture and social networking as major potential threats to the Uzbek status quo.

Official rhetoric can sound paranoid and archaic to those unfamiliar with the Uzbek government’s modus operandi. For example, a November 12 statement on how to raise a “spiritually rich generation,” posted on parliament’s official website, contained the following: “Today we observe efforts to undermine [Uzbekistan’s] national interests, ideology, and spiritual moral principles through subversive ideas distributed on the Internet, by mobile phones, computer games, and video products, which are camouflaged as pop culture. … The task of creating a favorable information environment for youth is one of our top priorities.”

Inside classrooms, the SNB, the successor to the Soviet-era KGB, relies on a far-reaching network of informants to ensure conformity, according to students and teachers. A course required in secondary schools, “The Idea of National Independence and Moral Development,” seeks to instill students with patriotism, the vice principal said, by forcing them to memorize Karimov’s speeches.

Bahodir Choriev, leader of the exiled opposition group Birdamlik (Solidarity), told EurasiaNet.org that thanks to such courses, “many young Uzbeks have little idea what political opposition is about.” Choriev says he fled to the United States in 2004 due to harassment from authorities.**

With classroom discussions observed and controlled, authorities have turned their attention to other areas they deem vulnerable to infiltration by pop culture. Hundreds of webpages are blocked and video games are regularly lambasted on state television as “poison.”

Last January, the Ministry of Higher and Specialized Secondary Education – responsible for students aged 16 and above, and not to be confused with the Ministry of Public Education – introduced a 23-page behavior code obliging students to abstain from criticizing school authorities, eschew flashy clothes, and avoid cultural events (including rock concerts) that are deemed alien to Uzbek national values. The code also encourages students to report unsanctioned religious activity.

Fund Forum, a charity run by Karimov’s jet-setting daughter Gulnara Karimova, is reportedly spearheading the efforts. According to its website, the organization is funding activities "promoting development of national online content and expanding use of the Uzbek language on the Internet.” Several Tashkent-based observers, including some government officials, believe the Ministry of Culture is following Karimova’s directions.

Critics scoff at the idea that Karimova can serve as an effective publicist for Uzbek values. In recent years, Karimova has adopted a bewildering variety of personas, including that of fashionista and music diva (using her stage name Googoosha). To her critics, these various identities are associated with Western decadence, not modesty.

“Gulnara has complete disregard for Uzbek cultural values; she is all over Uzbek media with her gaudy music videos, she shows up in mosques in skimpy dresses,” said Shahida Tulaganova, an Uzbek journalist based in London, referring to a provocative music video Karimova released in September.  “How can she be a role model for millions of Uzbek youngsters when she has little regard for things [many] Uzbeks view as sacred?”

Education officials, tasked with implementing the new rules in small towns and villages, have quickly discovered how unpopular the ideological directives are. Internet café owners complain the "teacher raids" are bad for business. And parents have reportedly been angered by punishments imposed on students for wearing clothing deemed inappropriate.

Given the level of popular distaste for the government directives on youth behavior, teachers in many cases are quietly looking the other way when it comes to enforcement, said Dilnoza, a student of Uzbek literature in Tashkent. “They often delegate the task of monitoring students to Internet café employees,” Dilnoza said. The vice principal in Ferghana said few, if any, students report suspicious activities.

He added that forcing poorly paid teachers to police student behavior outside of classrooms is having unintended consequences. “Teachers’ salaries are very low. As a result, there are many cases of teachers extorting bribes … for better grades,” he said. Teachers have also been accused of seeking payoffs for not inventing moral infractions. “Students’ moral upbringing is something parents must deal with,” the vice principal added.

Authorities in Tashkent are aware their ideological injunctions are routinely flouted. Parliament is now preparing a new law – “On protection of youth from subversive ideologies and aggressive information” – that is expected to stiffen punishment for non-compliance with ideological directives.

For the vice principal, this just shows how out-of-touch central authorities are. He complains that rather than ensure compliance, state inspectors spend much of their time extorting bribes from school directors and teachers. “Tashkent needs to get input from various segments of society before devising new policies. Otherwise, they will not be implemented,” he said.

**An earlier version of this story said Bahodir Choriev fled Uzbekistan due to politically motivated fraud charges. Choriev tells EurasiaNet that while he was charged with fraud, that is not why he fled.