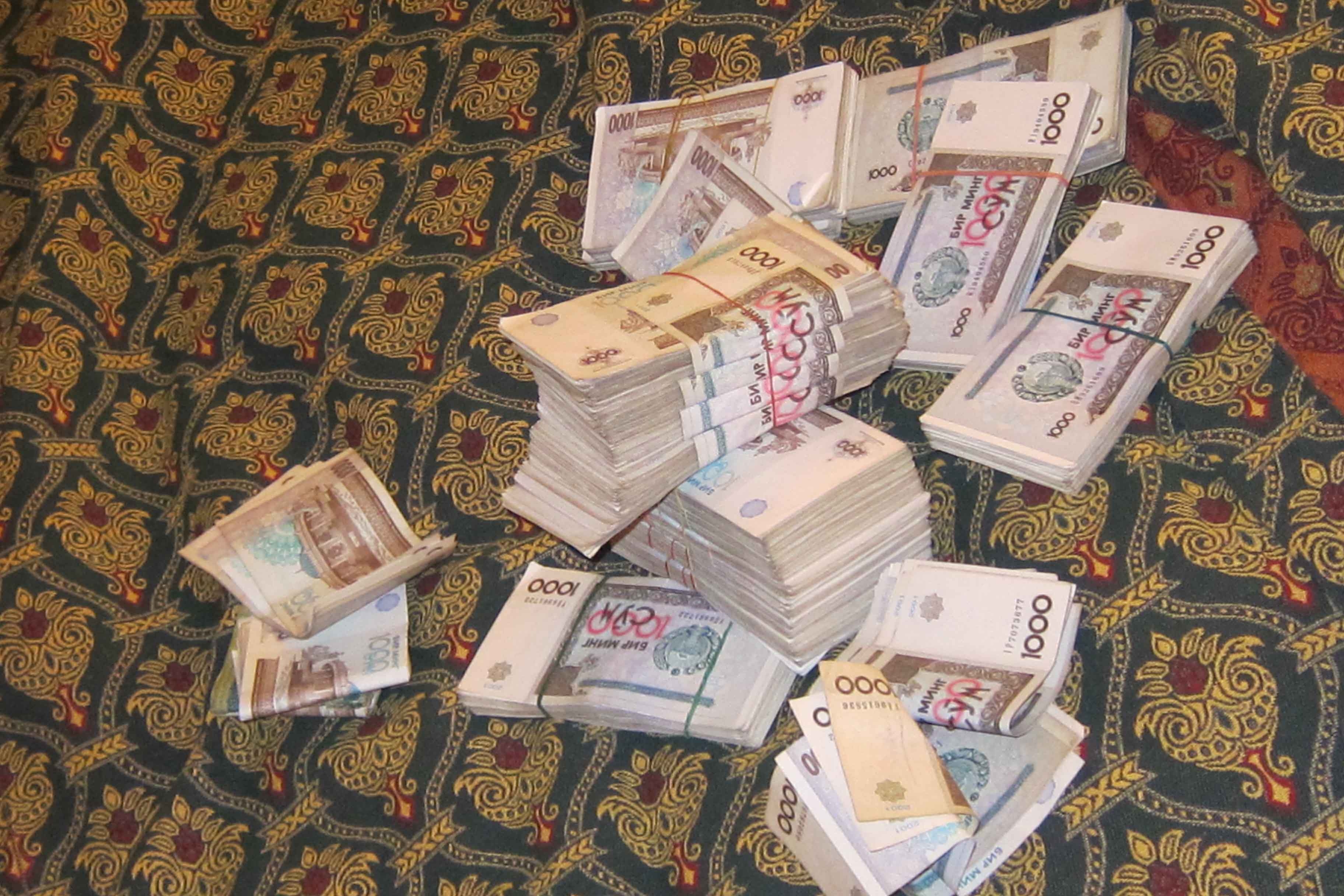 To understand how government and business works in Uzbekistan, follow the money. (Photo: Joanna Lillis)

The recent travails in Uzbekistan of Russian cellphone giant MTS – hit by employee arrests and a three-month suspension – highlight the perils for foreigners of doing business in Central Asia’s most populous country. Although Tashkent tries to project an investor-friendly image, experts say pervasive corruption makes it difficult, if not impossible for most foreign entities to enjoy a stable operating environment.

Tashkent suspended the operations of Uzdunrobita, MTS’ Uzbekistan arm, on July 17 for 10 working days, accusing it of using equipment illegally. On July 30, the suspension was extended for three months. Tashkent has also accused MTS representatives of engaging in criminal activity, including evading $1.3 million in taxes and violating Uzbekistan’s Byzantine currency regulations.

Five managers – including Russian citizen Radik Dautov, who was appointed Uzdunrobita’s acting head after director Bekzod Akhmedov fled Uzbekistan – are under arrest. On July 25, Russian officials said they had voiced their “concern” to Tashkent about Dautov’s detention. Six days later, Moscow urged a resolution to an “ever more acute” dispute.

MTS (owned by Russian oligarch Vladimir Yevtushenkov) denies being in breach of the law and is fighting back, condemning “the use of the tactic of intimidation and arrest of Uzdunrobita staff,” and assailing the “ungrounded attacks on a Russian investor’s business.”

The shutdown sparked an exodus of its 9.5 million clients to rivals amid frenzied speculation about the future of Uzdunrobita, which had a 40-percent share of the cellphone market among Uzbekistan’s 29.5-million population.

Observers doubt that a dispute over equipment is really at the root of MTS’s troubles in Uzbekistan. General malaise amid the smoke-and-mirrors nature of Uzbekistan’s economy is fueling such skepticism, as are recent case histories, particularly the rapid demise of the conglomerate Zeromax.

Analysts believe that the most lucrative business opportunities in the country are controlled by a coterie of movers and shakers close to President Islam Karimov, key among them Gulnara Karimova, the president’s daughter whose worth was estimated at $570 million by the German magazine Der Spiegel in 2010.

“Commercial interests are closely tied with political elite in Uzbekistan, although often direct ownership of businesses is hard to trace,” Lilit Gevorgyan, regional analyst at IHS Global Insight, told EurasiaNet.org in e-mailed remarks. “For those entering the Uzbek market, it is pretty clear that without the continuous endorsement of a very narrow political elite led by President Islam Karimov carrying out business in Uzbekistan bears high risks.”

Leaked US diplomatic cables have detailed the sway of the well-connected over Uzbekistan’s economy. One 2008 cable memorably described the rush for assets as “a fairly brazen, at times seemingly desperate grab by [Uzbekistan’s] elites for portions of the Uzbek economic pie.”

It also spoke of “a steady drumbeat of complaints from foreign investors” – and four years on, the list of disappointed investors continues to grow, encompassing Western, Turkish, and Asian firms, as well as Russian ones like MTS.

The case of UK-based company Oxus Gold illustrates the risks faced by bold investors venturing into Uzbekistan’s high-stakes economy. Following sustained pressure (including the imprisonment of a company metallurgist for 12 years on espionage charges), Oxus agreed to sell its 50-percent stake in the Amantaytau Goldfields mining operation to its Uzbek partners last year – but its troubles did not end there.

Oxus accused the buyers of understating the value of its share and remains locked in litigation, seeking $400 million at international arbitration over what company lawyer Robert Amsterdam has bitterly described as “an ongoing campaign to fabricate a reason to steal the last foreign assets in the mining industry in Uzbekistan.”

Turkish-owned businesses have also come to grief. The once popular Demir supermarket in downtown Tashkent stands shuttered after its owners quit Uzbekistan amid disagreements with authorities; investors in another Tashkent store, Turkuaz, fared worse: one is serving a three-year jail sentence on tax evasion charges, seven other Turks were convicted on the charge, but deported, and Turkuaz (renamed Toshkent) is doing a roaring trade under Uzbek management.

The list goes on: Indian textile firm Spentex Industries this spring lodged a $100-million compensation claim with Tashkent after “bankruptcy was thrust upon it;” Denmark’s Carlsberg suspended operations this year over what it described as a “shortage of raw materials.”

In this toxic investment environment, Tashkent launched a privatization drive in May, with 497 assets in sectors including energy, metallurgy, agriculture and industry up for grabs.

According to official statistics, growth is robust: the Asian Development Bank says Uzbekistan’s economy grew by 8.3 percent in 2011 and forecasts 8-percent growth this year. Nevertheless, without cast-iron guarantees investors are likely to be leery of stumping up cash.

The country fares poorly in international rankings, languishing near the bottom of the World Bank’s Doing Business 2012 report (166th out of 183 states) and Transparency International’s 2011 corruption ranking (177th out of 182).

Another defining feature of Uzbekistan’s economy is the thriving black market, where a dollar fetches a third more than the official rate of around 1,900 Uzbek soms.

Against this troubled background, “the MTS case will only add to Uzbekistan's already tainted investment destination image,” Gevorgyan said. “For now, the protection of business rights remains weak and there are no high expectations that Karimov is going to bring positive changes any time soon.”