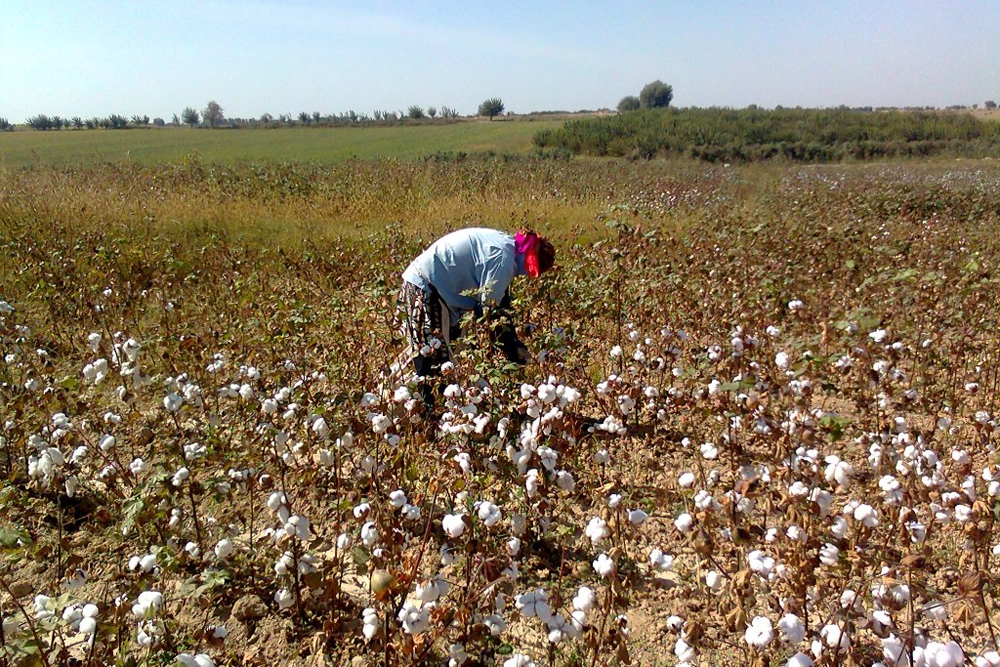 A cotton-picker in Uzbekistan. An obligatory stint of picking cotton means a 40-day stretch under the punishing summer sun. Those that feel unable to carry out the task must pay their way out of their predicament. (Photo: Shuhrat Axmedov)

When cotton-picking season comes around in Uzbekistan, lists of names start to be compiled by local officials up and down the country.

On them are the names of the teachers, civil servants and health workers that make the backbone of a press-ganged army of harvesters that support this economically important industry.

For Tursuna, a 50-year-old teacher in the agriculturally rich Ferghana region, it is a time of dread.

“I have high blood pressure and a weak heart — I should not be picking cotton. But the headmaster says: ‘Either quit or find somebody who can pick the cotton in your place,’” Tursuna told EurasiaNet.org. Disgruntled individuals like Tursuna are willing to provide their full names out of frustration, but surnames are being withheld from publication out of concern over possible reprisals.

A stint of picking cotton means a 40-day stretch under the punishing summer sun. Those that feel unable to carry out the task, like Tursuna, must pay their way out of their predicament. Workers lists are detailed and include full names and passport data. Last year, Tursuna paid her niece, Nargiza, 600,000 Uzbek soms (around $100) to do the picking for her.

“Living in barracks and eating broth — I am just not up to it, and it is dangerous. Many of my young colleagues return from cotton fields suffering from hepatitis or stomach flu,” she said.

Uzbekistan has grown increasingly sensitive to pressure applied by international nongovernment groups objecting to use of child and forced labor in the cotton fields. Significantly, hundreds of global companies have boycotted Uzbek cotton over concerns of forced labor.

Tashkent is eager to be seen to be taking action to prevent abuses.

On July 28, Prime Minister Shavkat Mirziyayev told a government meeting that during this upcoming cotton harvest campaign, no school or university students should be sent out into the fields. Those kinds of statements are part of the cat-and-mouse game that Uzbekistan is now obliged to play because of an inspection regime implemented by the International Labor Organization (ILO).

In fact, students from all regions except those around the capital, Tashkent, have to go into the fields on pain of expulsion. The much-criticized practice of deploying children has largely disappeared, so the burden has fallen on students at vocational colleges, lyceums and universities. First-year students at colleges and lyceums get a pass, which means harvesting is done by boys and girls over 16 years of age.

An official in the Ferghana regional administration told EurasiaNet.org on condition on anonymity that harvesting in his area was being done mainly by civil servants and employees of agricultural enterprises.

One farmer, Muzafar, said that without gatherers from the city and regions, there is no way the harvest could be completed. “According to the plan, we are supposed to gather all the cotton in 40-50 days. I have 80 hectares of land — of that, 50 hectares is reserved for cotton,” Muzafar told EurasiaNet.org.

Some anecdotal accounts reveal the startling scale of the mobilization. Ferghana region consists of 14 districts, each of which is expected to mobilize around 20,000 pickers. That requires the mobilization of 280,000 souls across the entire region to pick 185,000 tons of raw cotton, as stipulated under the government plan. The entire population of the region is 3.7 million.

Compulsory laborers receive paltry compensation. Cotton-pickers in Ferghana said that last year they were paid 260 soms ($0.04) per kilogram gathered. The fees for this season have not been decided yet, but there is every likelihood they will remain the same.

Economist Anvar Nazirov explained that drawing on members of the population with no link to the cotton industry to perform harvesting duties is a custom that dates back to the Soviet era, becoming an established practice in the 1930s. “In the post-Soviet period we may have done away with state-owned farms and collective farms, but we haven’t given up Soviet agricultural management techniques. … In theory, it is the farmers themselves that are supposed to deal with the issue of gathering cotton. They hire people on contracts and pay them,” Nazirov said.

But as long as farmers receive their orders from above — the government — about what to sow and who should harvest, agriculture will remain uncompetitive and ineffective.

In addition to being deprived of the choice of what to grow, farmers are also not allowed to pick their own buyers. The state buys the whole crop at fixed prices.

Last year, farmers were paid 1.2 million soms ($200) for every ton of cotton they supplied.

“The government needs to abandon the existing agricultural paradigm, and to stop forcibly making people pick cotton in general. They need to implement modern cultivation technology, improve the condition of soil and, of course, introduce mechanical cotton harvesters,” Nazirov said.

On paper, the government is making moves in this direction. Speaking at the opening of the International Uzbek Cotton and Textile Fair in Tashkent in 2013, Mirziyayev said that Uzbekistan would move toward 80-90 percent mechanization of cotton harvesting within two years — by this season, in other words.

But this appears to be a hollow promise for now, although it is periodically revived.

Speaking at a plenary meeting of the International Cotton Advisory Committee in December, Uzbek cotton industry representative Rinat Gulyayev noted that while only 20 percent of cotton is now machine-picked, that number will soon increase to 80 percent. Gulyayev, who has since making those remarks been appointed head of a state cotton research institute, said that the necessary machinery had been designed locally and was being assembled at a plant in the capital, Tashkent.

The marked absence of mechanized cotton harvesters inexorably leads to an uncomfortable conclusion. Handpicked cotton is typically higher quality and yields better prices, so the temptation is strong to retain cheap, labor-intensive harvesting as long as is possible. This is particularly pressing in the face of long-term declines in prices for cotton.

Uzbekistan produces around 3.5 million tons of cotton annually. The crop is of strategic importance to Uzbekistan’s economy, bringing in about $1 billion every year.

Many of the foreign sales are made at a cotton and textile fair in Tashkent every October. The fair is held under an intense veil of secrecy, and journalists and rights activists trying to attend are actively hindered in their attempts. In 2015, agreements were sealed with foreign companies for the sale of 700,000 tons of cotton fiber. Buyers of Uzbek cotton mainly come from Bangladesh, China, and South Korea.

But as the US-based Cotton Campaign pressure group notes, it is far from clear any of this benefits the population. “Profits of the Uzbek cotton sector support only [President Islam Karimov's government,” the group notes on its website. “The state profits from sales to global buyers. The profits disappear into a secret fund to which only the highest level officials have access, known as the Selkhozfond.”