A new documentary on a Soviet soccer star also tells the story of Central Asia’s ethnic Korean community, which was deported en masse to the region by Stalin. 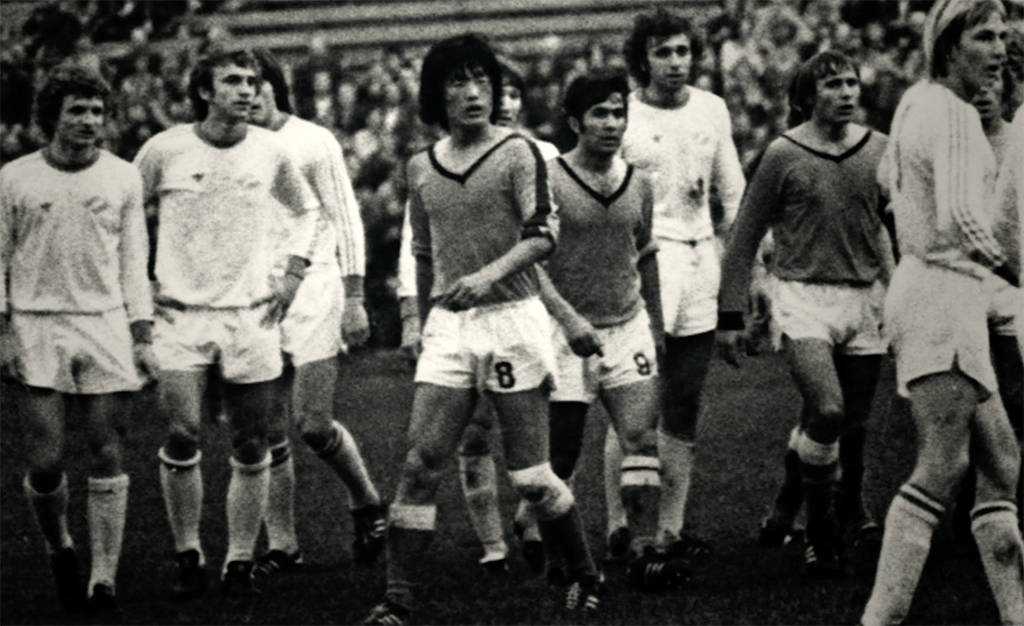 Mikhail An, center, in a screenshot from Brian Song’s new film Misha.

Footballer Mikhail An and his childhood sweetheart Klara’s wedding in 1975 was the first major event to be held in the Hotel Uzbekistan, one of Tashkent’s most famous landmarks.

It was, by the standards of the time, a society wedding and attracted an extensive press pack.

An’s FC Pakhtakor was playing some of the most exciting soccer in the Soviet Union.

At one point during that night, the team’s three leading lights – An, Vasilis Hatzipanagis and Vladimir Fyodorov – came together for a tearful embrace. Hatzipanagis, the shaggy-haired, Tashkent-born son of Greek political emigres, was preparing to return to his historic homeland to join a club in the Greek league. He would go on to be acknowledged by the Greek football federation as the greatest Hellenic player of the modern era.

An and Fyodorov would die in 1979 along with most of the FC Pakhtakor team when two airplanes collided in midair over the Ukrainian city of Dniprodzerzhinsk. 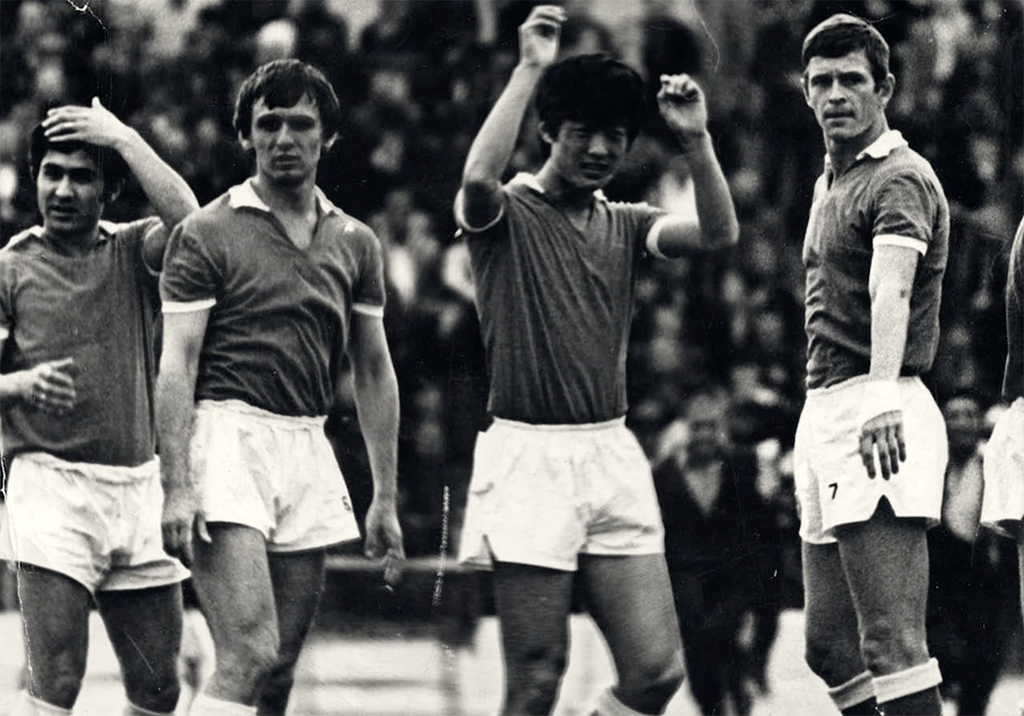 Brian Song’s new documentary Misha is named for An and is likely to appeal to anyone with an interest in Soviet-era soccer.

But it is also the story of An’s ethnic Korean community, known as the Koryo Saram, which was deported en masse to Central Asia from the Russian Far East under Josef Stalin.

An had not needed to join his teammates for their flight to Ukraine. He was injured at the time and flying made him nervous. But as the team captain, he felt the need to don a suit and see them off. Legend has it that the Pakhtakor players carried their talisman onto the plane.

Many of An’s parents’ generation died during another journey, after Soviet authorities gave Far East Koreans 24 hours to pack their things for trains heading over tundra and steppe.

Stalin suspected that the Koreans were laying the ground for a Japanese invasion.

Ironically, many of them had only moved to Russia at the turn of the 20th century when Japan had colonized the Korean peninsula.

The deportees lived “hungry and cold” in the wagons that transported over 170,000 people in total during the weeks-long journey in 1937, survivor Zinaida Tsay told Song in the documentary.

Soviet data cited in academic studies suggested that between one-fifth and a quarter of those deported had died within a year of the order. It is not clear how many of these died on the train ride, as malnutrition and illness later ripped through the community adjusting to a new environment.

Nikolai Kim, another survivor that Song interviewed, recalled how a man who froze to death inside the wagon transporting Kim’s family was wrapped in a blanket and tossed out into the wilderness. “I have remembered this my whole life,” Kim said.

Kim and another survivor who appeared in the documentary died while it was still in production.

The collective farm, or kolkhoz, was the main destination for the deported community and its route to rehabilitation in the eyes of communist bigwigs. Vladislav Han, editor of the community-focused Koryo-Saram website, told Eurasianet that excellence on the farm laid the ground for other successes.

“You never get far without money in sport. The Korean collective farms were well organized and made very good money. A lot of that was put into sports teams,” said Han.

An grew up on a kolkhoz called Sverdlovsk outside Tashkent.

His older brother, Dmitry An, became the first ethnic Korean to play in Soviet soccer’s top division and later devoted his energies towards ensuring that Mikhail – 13 years his junior – followed in his footsteps.

In the documentary, Mikhail An’s son, also called Dmitry, claimed that this extended to beating his sibling when he fled home to escape the rigors of his new sport-centric boarding school in Tashkent.

An went on to captain the Soviet Union to European tournament glory at youth level, eventually breaking into the senior squad. Rare archival footage included in Misha shows a tall, graceful playmaker who could win back possession of the ball, get to his feet and distribute a pass in a single movement. 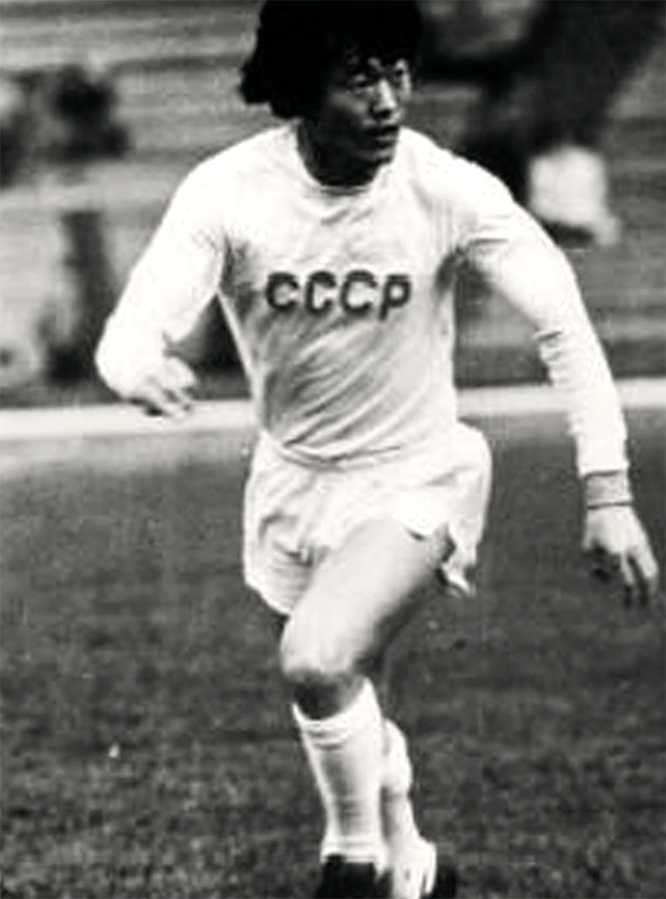 In one game in 1977 against Ukraine’s FC Kryvbas, An scored twice from corner kicks – a nearly impossible skill.

If he had a weakness, it was his stamina, which he had to build up gradually in a league dominated by bulkier Slavic types.

Hatzipanagis, who still sports the same hairstyle more than four decades later, remembers his former captain as “the professor” on the field and as a friend and guide off it.

Song’s documentary is precious precisely because of what it preserves and brings to a wider audience.

Soviet authorities kept concealed for more than a week the air disaster that killed 178 citizens in total.

Alla Tadzetdinova, the charismatic wife of Pakhtakor’s coach Idgay Tadzetdinov, spent the rest of her life promoting the memory of the 1979 team and – with less success – challenging the official version of the tragedy.

She died aged 78, just weeks before the film’s debut at the Big Apple Film Festival last month. The older Dmitri An, to whom the documentary is dedicated, passed away the year before aged 79.

FC Pakhtakor, where the younger Dmitri An is a youth team coach, continues to hold tournaments honoring his father’s fallen team.

Among Soviet Koreans, said Han, the website editor, the legend of Mikhail An is eclipsed only by Viktor Tsoi, the iconic rock star killed in a 1990 car crash.