Uzbekistan: The limbo existence of the stateless

According to UN statistics, there may be up to 87,000 stateless people in Uzbekistan. Many are ethnic Uzbeks who fled Tajikistan’s civil war in the early 1990s. 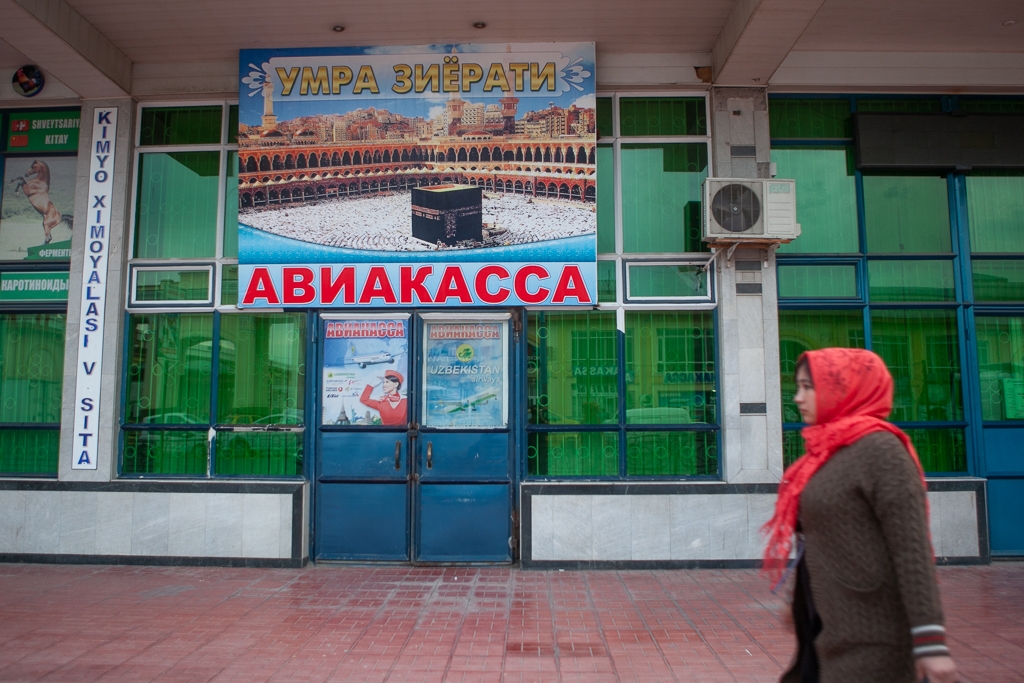 An advertisement for air tickets and the pilgrimage to Mecca, which is not possible for the stateless. (David Trilling)

Dreams of Mecca are frustratingly out of reach for Goyibnazar Ernazarov.

Ernazarov, 70, spoke with unconcealed despair as he explained how, yet again, he had been denied the chance to embark on a pilgrimage to Islam’s most holy site. His wife, 66-year-old Bahriniso, cried as he told the story.

“This is the fifth year that we have been unable to do the hajj. The spiritual directorate [a parastatal religious affairs oversight body] told us that this year we would absolutely be able to go. But two days ago, they told us that we were not on the list,” Ernazarov told Eurasianet.

The Ernazarovs hail from Tajikistan’s Sughd region. In 1993, as war was beginning to rage in their home nation, they and their four children upped sticks and crossed into Uzbekistan, to the border-flanking town of Bekobod. Only two years previously the two countries had been part of the Soviet Union.

Once he settled in his new home, Ernazarov became a model resident – if not citizen. He has authored a textbook on the teaching of Uzbek in middle school. The book has had seven print runs. He has written nearly a dozen books of poems, stories and essays.

Until 2000, his only form of identification was an expired Soviet-issue passport. That year, he was given a residency permit. But that piece of paper was not enough for him to be able to cross back into Tajikistan to see his mother and other relatives. Uzbek border guards would routinely turn him back.

“Several times I applied for Uzbek citizenship for myself and my family. I appealed to all kinds of state bodies, even to parliament, but there was no response,” Ernazarov said.

According to the most recent data reported by the UN High Commissioner for Refugees, or UNHCR, which dates back to 2010, there may be up to 87,000 people in Uzbekistan enduring a similar limbo existence.

Turdali Normatov, a resident of Bekobod, works as a reporter for a local newspaper. He came to Uzbekistan in 1994, when he was 19. With the war raging and joblessness rife, Normatov saw no future in Tajikistan. He had relatives in Uzbekistan and thought the move would be for the best.

In 1996, he secured a residence permit, with the hope of getting Uzbek citizenship five or so years later – that is how long the procedure should last. A quarter of a century has passed since.

“When I bought my first car, a Zaporozhets, they gave me yellow plates,” Normatov said, referring to the plates reserved for non-citizens. “That was like catnip for traffic cops. They stopped me all the time. There was a time that with my documents I could not even get a SIM card for my mobile phone.”

Under Uzbek law, stateless people cannot cast votes in elections and referendums or stand for office. They cannot be appointed to certain civil servant posts.

Even warming ties between Uzbekistan and Tajikistan have not helped matters. The once frosty neighbors have dropped mutual visa requirements and opened more than a dozen crossings along the border.

But people like Normatov see little benefit. If he wants to visit relatives on the other side – in Tajikistan – he must go through the hassle of obtaining a stateless-person, short-term travel document and apply for a visa.

In Soviet times, borders between the republics existed only on paper.

When the border between Uzbekistan and Tajikistan became hard, families were split. Parents and children, brother and sisters did not see one another for years.

When Dildora Rakhimberdiyeva’s grandfather died, she spent three days at the border crossing, pleading with officials to get to the other side. But it was for nothing. She missed the funeral.

Rakhimberdiyeva’s husband, seeing how upset his wife was, cooked up a plot to smuggle her across the border under cover of night. But around that time, rumors were circulating around Bekobod about how a border guard had shot a 25-year-old man trying to do the same thing. It is unclear if there was any truth to this rumor, but Rakhimberdiyeva took fright and called off the plan.

Things have improved somewhat under Uzbek President Shavkat Mirziyoyev. In December 2016, just a few months after taking power, he signed a decree granting citizenship to dozens of people. This trend has been continuing apace.

Shukhrat Ganiyev, a lawyer who works closely with the stateless, told Eurasianet that as of 2019, more than 2,000 people have been given Uzbek citizenship. It is a drop in the ocean, says Ganiyev, but at least it is something.

“When you compare this to the one-off cases in years past, it is, of course, progress,” Ganiyev said.