At the height of Stalin’s power, he let a handful of Soviet Muslims visit Mecca. Why? 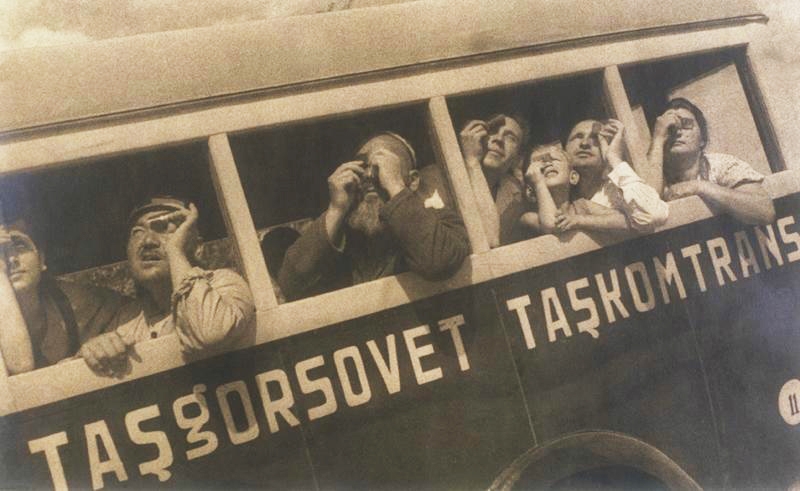 It is still treated as an honor to greet Amirsaid Usmankhodjayev when he ambles through Tashkent’s old Zhangokh neighborhood.

Usmankhodjayev, 73, is a descendant of venerated saints buried in the city’s Hast-Imam complex. But no less importantly, he is the grandson of Eshon Bobokhon, the man whom the atheist Soviets charged with reviving the Muftiate as a parastatal Islamic administration body at the height of the second world war.

Usmankhodjayev is now dedicated to preserving memories of that passage of history. It is no easy feat.

“Many documents concerning the activities of Islamic institutions and muftis from 1943 to 1989 were destroyed in a fire in 1991. So, I decided to create a museum dedicated to my grandfather and to his attempts to revive Islam in the Soviet Union,” he told Eurasianet.

The museum is located in the basement of Usmankhodjayev’s home. Almost 80 percent of the artifacts are photographs covering the period from the 1940s through to the present day.

It was by dint of Eshon Bobokhon’s efforts that a small group of pilgrims embarked on the first pilgrimage to Mecca in more than a decade. The trip, which took place in late 1944, is an episode that Usmankhodjayev dwells on with particular pride.

The Russian Revolution marked a cataclysmic moment for people of all religious faiths. The 25 or million Muslims that populated the now-collapsed empire were no exception. Places of prayer were confiscated and desecrated, faiths were derided as a matter of state policy and the devout were compelled to renounce their beliefs.

Repression reached its peak in the years after 1936, as Josef Stalin unleashed a wave of terror that targeted anybody deemed ideologically suspect. While there are no reliable estimates for exactly how many clerics were eliminated in the Central Asian republics over the early decades of Soviet rule, it is evident they numbered in the many thousands.

Visiting whatever mosques remained could imperil one’s job or even life. Islam was nonetheless preserved quietly inside homes, within families. In old Tashkent, many hid away prayer mats or copies of the Koran. When darkness descended, those who dared would perform the namaz.

It was the war that put the forceful pursuit of atheism on hold. Like their remnant counterparts in the Russian Orthodox Church, Islamic clergy were pressed into exhorting patriotic appeals to their faithful in the interests of aiding the war effort. Eshon Bobokhon complied in an October 1943 address to the fledgling Central Asian Muftiate in which he enjoined fellow Muslims to show patriotic solidarity with the Soviet state in its war against what he described as the Gitlerchilar, or Hitlerites. Such appeals will doubtless have served Bobokhon’s petitions to Moscow for Muslims to be given more room to practice their faith.

The Muftiate that Bobokhon was addressing had come about because of a new model for managing religion devised by Stalin. The Soviets used earlier existing Tsarist-era entities as bases for creating three of the Muslim spiritual administrations: in Transcaucasia, the North Caucasus and in the Siberian city of Ufa, respectively. The Spiritual Administration of the Muslims in Central Asia and Kazakhstan, or SADUM, had to be made from clean cloth. Bobokhon, who had himself endured repression, was placed at its head.

The privilege of embarking on a pilgrimage was another turning point. The question that still remains is why the Soviets would have permitted this potentially problematic trip.

Historian Rinat Shigabdinov contends that allowing Islam breathing space was part of Moscow’s overtures to the developing world, which was soon to become a theater for ideological supremacy between the Soviets and the West.

“The conversations of our pilgrims with pilgrims from other countries going to Saudi Arabia, or with the local population and with people who had emigrated from Turkestan [were intended to] serve to expose anti-Soviet propaganda,” the historian told Eurasianet.

The first pilgrimage was performed 1944 by a group of six. Because it took place outside Ramadan, it cannot be termed a hajj, but its true value was always mainly symbolic.

Details of the pilgrimage remain patchy because of the limited access to Soviet archives. Much of what is known is thanks to Shigabdinov’s work. According to his research, the group comprised three Uzbeks, a Tajik, a Kazakh and a Tatar. They were all religiously educated, had studied at a madrasa, and served as imams.

One’s biography showed that he worked as a porter and a watchman at a railway station – a normal thing since it was quite inconceivable that a Soviet citizen could be a cleric alone in Stalinist times. The pilgrims were led by the deputy head of SADUM, Murodhoja Solihkhjayev.

It was a long journey done almost entirely overland and by car. Only once did the group fly. Because the voyage was part pilgrimage, part diplomacy, it took in multiple countries, including Iran, Turkey, Iraq and Egypt. A British Consul helped with their arrangements in Iraq. Soviet diplomatic stations were visited in every country – hardly avoidable since the entire trip was organized under the Kremlin’s auspices.

Archival documents show how the pilgrims were met by local dignitaries and clergy in every city they visited. Receptions and banquets were thrown in their honor. In Tehran, they attended a session of parliament. National Consultative Assembly chairman Mohammad-Sadegh Tabatabaei said in a speech to his guests that Turkestan would always occupy a major role in Islam. In conclusion, Tabatabaei pledged that Iran would commit to fostering ties with the Muslims of Turkestan.

Connections were made, but the pilgrims also faced many awkward questions too. Some were about the fraught status of religion in the Soviet Union. Others wondered why nobody from the Soviet Union had visited Mecca or Medina for so many years. Was it true that Islam was prohibited by the Soviets and that believers were executed for their faith? Is it true that men are forced to live in shared dormitories with women?

The queries were posed not only at private receptions, but also by journalists in places like Egypt and Iran, for whom the arrival of Soviet pilgrims was exotic.

Shigabdinov said the travelers would reply that these questions were based on false assumptions. Religion was professed freely in the Soviet Union, they would say, dissembling heavily.

But the answers did not satisfy everyone. At one reception in Mecca, an individual identified in Soviet archives only as “Mahmud-Kamal” expressed skepticism about the upbeat testimony of the guests, stating that he had himself secretly visited Turkestan.

“I brought back many photos that I took from there,” the man is quoted as having said. “Among them were photos of a trial of a cleric. I know the situation in Turkestan well.”

The same archives have the pilgrims protesting at what they characterize as fabrications.

At other times, the Soviet delegation met with compatriots who had emigrated or fled. These encounters happened all over – in Mecca, Medina, Baghdad and Cairo.

In Mecca, the group met one person with a particularly compelling life story.

Khodjisultan Urunbayev had lived in what is now the northern Tajikistan city of Khujand. He was arrested for his religious activities and spent time in a prison in the Ferghana Valley. But he managed to escape and made his way to China, and then, somehow, onward to Mecca.

For the Soviets, Urunbayev was a treacherous foe. He had curried favor with his new hosts by writing several volumes attacking the religious policies of the Soviet Union and the Communist Party.

“He invited the pilgrims to come and visit him and he asked them the same questions that were always posed to them. But he expressed disbelief in their answers,” Shigabdinov told Eurasianet.

Urunbayev then offered his guests copies of his books. It is unknown whether they accepted them or brought them back to the Soviet Union. The latter probability is highly unlikely.

The official line against Islam began softening in the 1970s and 1980s. Soviet anti-religious propaganda persisted, as did a certain degree of repression, but it was a far cry from Stalinist times. In the dying days of the Soviet Union, many hundreds of Muslims were performing pilgrimages to Mecca every year.

Much about the history of the hajj from Soviet Uzbekistan remains hidden away in the archives, however, to Shigabdinov’s disappointment.

“There is no more Iron Curtain now, like there was during the Soviet Union. People should learn the names of the first pilgrims, who managed, despite the severe prohibitions, to open the way to Mecca,” he said. “I hope that historians and Islamic scholars will at some point get access to these archival documents.”