Much of Uzbekistan’s reboot depends on political will. 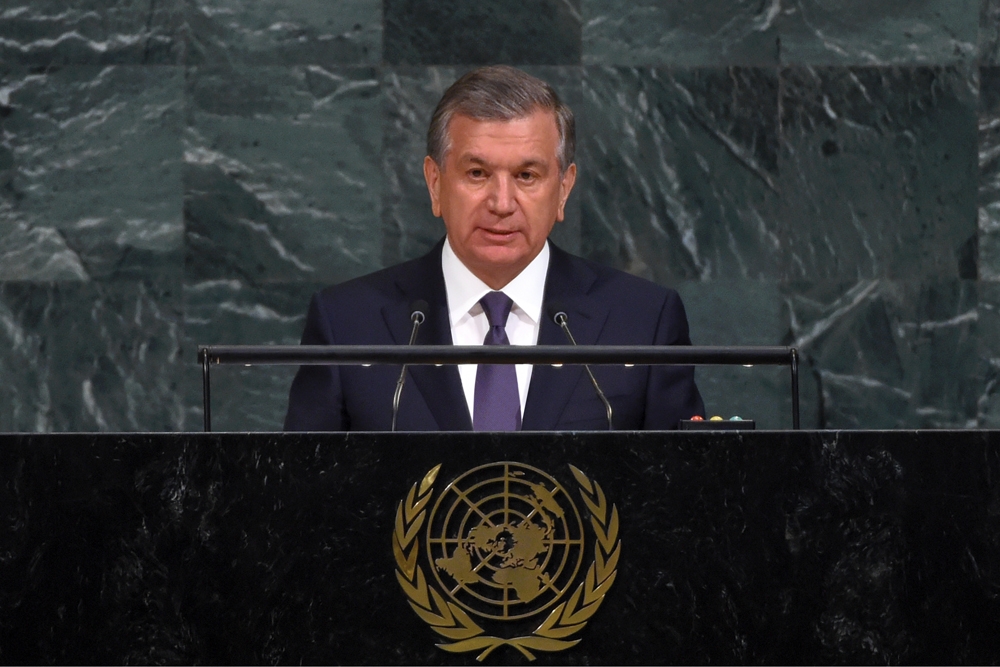 Speaking at the UN General Assembly in mid-September, Uzbek President Shavkat Mirziyoyev outlined a democratic vision for his country. While Mirziyoyev’s actions, not just his words, leave room for guarded optimism, it is clear that there are powerful elements in Uzbekistan that are not ready to abandon their Karimov-era ways. (Photo: Uzbek Presidential Press Service)

Speaking at the UN General Assembly in mid-September, Uzbek President Shavkat Mirziyoyev outlined a democratic vision for Uzbekistan. Just over a year since Mirziyoyev replaced the late strongman Islam Karimov, such a vision naturally generated skepticism. Yet, Mirziyoyev’s actions, not just his words, leave room for guarded optimism.

In his UN address on September 19, Mirziyoyev stressed a need for political and economic reforms that would help shape a new image for his country. His “ultimate goal,” he stated, was building a sound democracy in Uzbekistan, one where “human interests come first.” Such a vision marks a drastic departure from Uzbekistan under Karimov, when the country was routinely ranked by watchdog groups among the most repressive places in the world.

Setting aside the ambitious scope of this vision, Mirziyoyev has shown in his relatively short time at the helm in Uzbekistan that he means what he says. For one, his New York visit marked the first UN appearance by an Uzbek leader in 15 years, a break from Karimov’s self-imposed isolation.

And many of the goals Mirziyoyev outlined for his country’s future have started to find reflection in reality.

His eagerness to renew partnerships with Central Asian neighbors, for example, has already yielded a treaty on state borders with Kyrgyzstan that greatly eased a long-running dispute. His promise to foster the kind of growth that benefits more than a select few in Uzbekistan has been backed by ongoing economic liberalization and the official lifting of crippling currency restrictions. And in another hopeful sign, the EBRD is reengaging with Tashkent after a long absence, indicating that the country’s ties with global financial institutions might grow.

Elsewhere, Uzbekistan abruptly suspended the annual practice of using mass-scale forced labor for autumnal cotton-picking, a practice that drew global condemnation. Just days after Mirziyoyev’s UN speech, Uzbekistan recalled its students, teachers, and medical workers from the fields—they had already been dispatched there the previous week for a three-week stay—and Prime Minister Abdulla Aripov indicated that the practice might be over for good. The move, if true, would directly enact Mirziyoyev’s statement at the UN that it is “the government bodies [who] must serve the people,” not the other way around.

In the political realm, a sign of Uzbekistan’s growing receptiveness to human rights norms is its removal of about 16,000 people, many of them political dissidents, from its security blacklist, and releasing some political prisoners jailed by Karimov. Mirziyoyev also extended a hand to exiled activists, guaranteeing them amnesty upon return.

While Mirziyoyev may be sincere in his desire to push Uzbekistan in a new direction, it is clear that there are powerful elements that are not ready to abandon their Karimov-era ways. The clearest evidence of this was the arrest of dissident writer Nurullo Otakhonov, who was detained immediately upon his return to Uzbekistan after living in self-imposed exile in Turkey since 2016. Otakhonov was testing Mirziyoyev’s offer for émigrés to return, and his arrest came just days after the Uzbek president spoke at the UN. The timing of the incident seemed specifically designed to undermine Mirziyoyev’s credibility as a reformer. On top of the Otakhonov incident, a well-known journalist, Bobomurod Abdullayev, recently disappeared in Tashkent, and is reportedly being held incommunicado by authorities.

Meanwhile, in the economic realm, individuals in Tashkent were reporting on October 3 that they were unable to purchase dollars, euros or other foreign currencies with Uzbek sum, despite a government pledge that it would be possible to do so, starting October 1.

The hiccups in the reform process offer evidence that behind-the-scenes resistance to Mirziyoyev’s policies remains formidable. It is highly plausible that the Otakhonov incident was orchestrated by Rustam Inoyatov, the chief of the National Security Services. Inoyatov is connected to a Tashkent faction, while Mirziyoyev’s power base is associated with the Samarkand faction.

The changes initiated by Mirziyoyev seem driven by a desire to better position Uzbekistan to attract badly needed foreign investment. Uzbekistan is a significant producer of natural gas, yet until now foreign companies have largely stayed away, deterred by its exchange rate manipulation and the country’s rigid political climate. Possibly because of recent improvements on one or both of these fronts, Mirziyoyev’s stay in New York reportedly included a business conference where he signed deals totaling $2.6 billion with partners like General Electric, Honeywell, and Boeing.

Whether recent political changes are cosmetic, or far-reaching, remains an open question. Infighting among political and economic elites could put a lot of the new measures on hold.

Much of Uzbekistan’s reboot depends on political will. The political institutions needed to catalyze reforms are weak, and the judicial system is centralized and beholden to the state apparatus.

Most crucial to the success of reforms will be how Mirziyoyev manages to tweak the delicate mechanisms used by local elites to distribute wealth and influence among themselves. Even with Karimov gone, Uzbekistan’s domestic politics, like elsewhere in Central Asia, revolves around client-like alliances, patronage, and nepotism.

While he may resort to lofty rhetoric when speaking in public, such as at the UN General Assembly, behind closed doors, Mirziyoyev no doubt will have to use a more bare-knuckled approach if he is going to subdue internal resistance to change.

Saipira Furstenberg is a research fellow at the University of Exeter, Department of Politics. She is affiliated with Exeter Central Asia Studies Network.