What marked the conference as particularly unusual was the large number of international journalists in town. 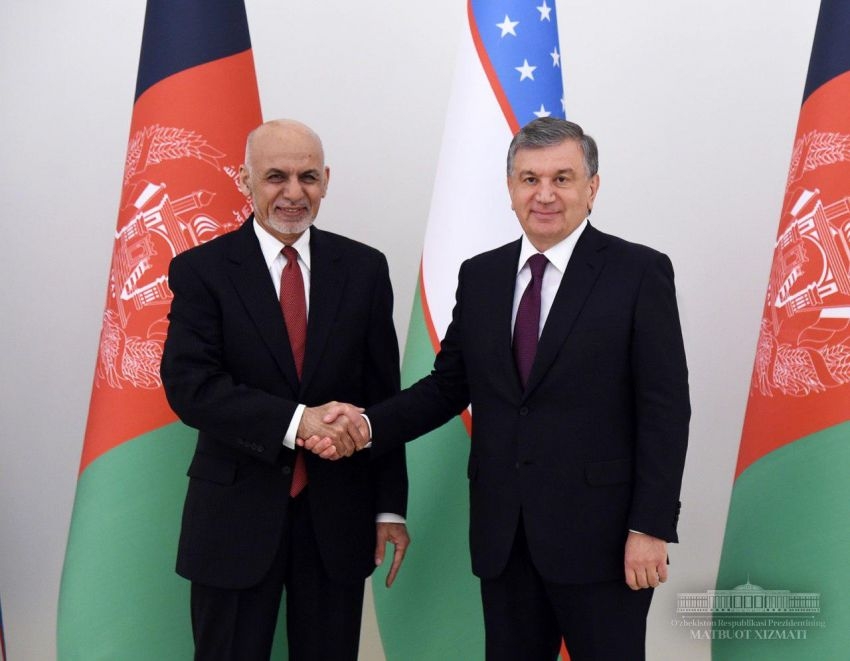 It has been many a year since Uzbekistan’s capital has seen such a hubbub of international attention. What unfolded in Tashkent this week was not so much an Afghanistan peace conference as a coming-out party.

The city was decked out in a dazzle of international flags — all those of the Central Asian nations, Russia, the United States and the European Union. The sight of the Afghan black-red-and-green was particularly striking, as it rarely makes an appearance; indeed, here Afghanistan is often a byword for drugs and violence.

State television trumpeted the two-day peace conference, which opened on March 27, as the brainchild of President Shavkat Mirziyoyev. Journalists accommodated at the press center watched on a jumbo screen as Mirziyoyev arrived mid-morning at what the Lonely Planet guidebook describes as the “preposterously large” Dom Forum congress hall.

There were many foreign dignitaries on call to give the event the luster Mirziyoyev must have been hoping for. The first to meet with the Uzbek leader was Federica Mogherini, the EU’s top diplomat. Others included the Afghan president, and foreign ministers from Russia, China and Turkey. The Trump administration maintained its course of mid-wattage diplomacy by dispatching Undersecretary of State for Political Affairs Thomas Shannon.

But the elephant not in the room was the Taliban, who failed to turn up, despite being invited. “Representatives of the Taliban movement will not be at the conference, but they will hear everything that is discussed at this forum,” Sherzod Kudrathodjayev, a representative of the International Press Club in Tashkent, told reporters on the eve of the conference.

Uzbek officials adopted a stance that struck some observers present as uncomfortably partial. For example, the deputy chairman of the Senate, Sodik Safoyev, told reporters that the main partner for Uzbekistan will be “the government of [Afghan President] Ashraf Ghani,” before adding that “we informed all political parties that our platform is open to everybody.”

Striking a pose as the regional peacemaker, Mirziyoyev opened his speech by telling his listeners that the “fires of war were not ignited by the Afghan people from within.”

“The main precondition for the promotion of peace will be the development of a mechanism for dialogue between the Afghan government and the armed opposition through the adoption of a roadmap,” he said.

Uzbekistan stands ready to host direct talks between Afghan government representatives and the Taliban on its territory, he added.

Ghani made the first few utterances of his statement in Uzbek, causing Mirziyoyev to break into a broad smile. He then continued in English.

The Afghan leader thanked the United States and NATO for their peacekeeping efforts and then turned to Russian Foreign Minister Sergei Lavrov and proposed a minute of silence in respect for the dozens of people killed in a mall fire in the city of Kemerovo over the weekend.

A representative for the Iran delegation shot back by asking: “And who created the Taliban then?”

This exchange forced Uzbek Foreign Minister Abdulaziz Kamilov to intervene. He reminded the hall that the conference had not been summoned to dredge up unrelated diplomatic rows.

What marked the conference as particularly unusual was the large number of international journalists in Tashkent. Among them were minor celebrities, like the chief editor and creator of the Moscow-based Ferghana news website, Daniil Kislov, who was visiting his country of birth for the first time in 14 years. Kislov appeared highly contented in the press center as he addressed multiple queries from journalists.

In other manifestations of the well-worn regional practice of journalists interviewing journalists, Uzbek reporters eagerly hunted down their multiple Afghan counterparts for comments.

Eager to please the visiting journalists, event organizers set up a round-the-clock buffet in the basement of the press center. The predominantly male reporters made ample use of the unlimited beer and wine on offer. Each reporter was allocated a car and assistants recruited from Tashkent’s university for prospective diplomats. Journalists for outlets with relaxed rules on accepting gratuities were put up in hotels free of charge.

The conference was not entirely without precedent. In 1999, the late President Islam Karimov hosted a 6+2 format meeting, which brought together all Afghanistan’s neighbors — China, Pakistan, Iran, Uzbekistan, Turkmenistan and Tajikistan — and the United States and Russia. At the close of discussions, which also included the Taliban, then strongly in the ascendant, and their armed opposition, the conference adopted the Tashkent Declaration. That document too spoke about the need for peace through dialogue.

Arkady Dubnov, another longtime Central Asia watcher allowed back into the country for the conference, said that Uzbekistan might be biting off more than it can chew with its peace-brokering initiatives.

“To draw in the Taliban through political methods will be complicated. You have to pique their interest through material means,” Dubnov said.

One notable example Dubnov cited is the TAPI gas pipeline being built from Turkmenistan to India through Afghanistan and Pakistan, whose security the Taliban has pledged to uphold.

“If the Taliban are given this chance, they will be able to generate a certain degree of income and can be plugged into the peace process. And Tashkent should participate in this pragmatic business approach,” he said.

As to the Uzbek public, feelings are likely more sanguine.

One Tashkent resident, 60-year-old Yodgora Lutfullayeva, told Eurasianet that she feels a ripple of anxiety when she hears the word Afghanistan.

“Maybe it isn’t worth Uzbekistan getting involved in this Afghan business, when even very large powers aren’t able to sort out this country. Can we really be expected to carry this burden?” Lutfullayeva said.