The question of whether Uzbekistan should join the Russia-led Eurasian Economic Union, with its single market of 184 million people, has provoked fierce debates. 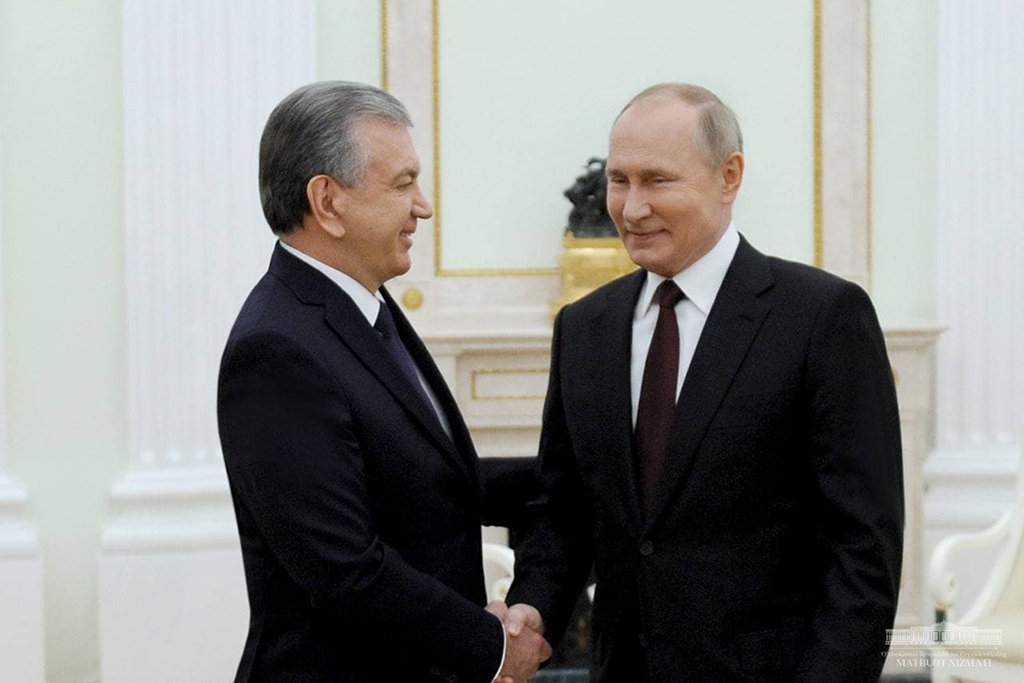 Putin had flattering words for the Uzbek leader. (president.uz)

Trade topped the agenda, which also touched on – but did not dwell on – the troubled situation in Afghanistan.

Putin kicked off with some flattering remarks, painting Mirziyoyev’s recent landslide re-election in a vote featuring no opposition candidates as a ringing endorsement from his people.

“You are moving forward confidently, raising the country up, and the result is there. People see that, they feel it, and therefore they reacted to what you have done over recent years like this. The result indicates that people trust you.”

Mirziyoyev hailed a “breakthrough” in relations in recent years, focusing on a boost to trade.

In the first nine months of 2021, bilateral trade hit $6 billion. That surpassed the total of $5.6 billion for 2020, when trade took a hit from the pandemic. This year, Uzbekistan’s trade with Russia – its second largest trading partner after China – will reach $7 billion, Mirziyoyev predicted.

Agreements worth $9 billion with companies from Russia were signed during a regional economic cooperation forum. That included 141 investment projects worth $7.4 billion, and 455 export deals worth $1.6 billion.

One topic neither leader mentioned publicly was Uzbekistan’s relationship with the Eurasian Economic Union (EAEU), a Russia-led trade bloc that includes Armenia, Belarus, Kazakhstan and Kyrgyzstan.

Uzbekistan obtained observer status last year, following rampant speculation about whether it would join, which Russia is eager for it to do.

While the presidents refrained from publicly discussing that in Moscow, Uzbekistan’s prime minister was, on the same day, enthusing about closer cooperation.

The government plans to align most of its technical regulations with those of the EAEU next year, Abdulla Aripov said. Work to bring 22 regulations in line is nearly complete, and efforts to align another 26 have begun.

Aripov also offered the bloc guaranteed supplies of agricultural produce, and said Tashkent was interested in a “joint program of cooperation” with EAEU states on trade in foodstuffs.

The question of whether Uzbekistan should join the EAEU, with its single market of 184 million people, has provoked fierce debates.

Others point to the potential costs of joining, which could threaten the existence of companies unable to withstand competition from stronger Russian firms, analyst Anvar Nazirov believes.

The Kremlin would also like Uzbekistan to re-join the Collective Security Treaty Organization, which it left in 2012, Nazirov suggested, as Russia tries to position itself as a “protector and guarantee of security in Central Asia” following the Taliban takeover of Afghanistan.

Tashkent has already rebuffed that idea, however. There is “no need” to re-join, Foreign Minister Abdulaziz Kamilov said last month. What is important is “to effectively build our collective cooperation in the security sphere” to counteract possible threats from Afghanistan.

Mirziyoyev and Putin said little about Afghanistan publicly, beyond that they had discussed it in the context of regional security.