The government will annually decrease the volume of grain it buys through state orders. 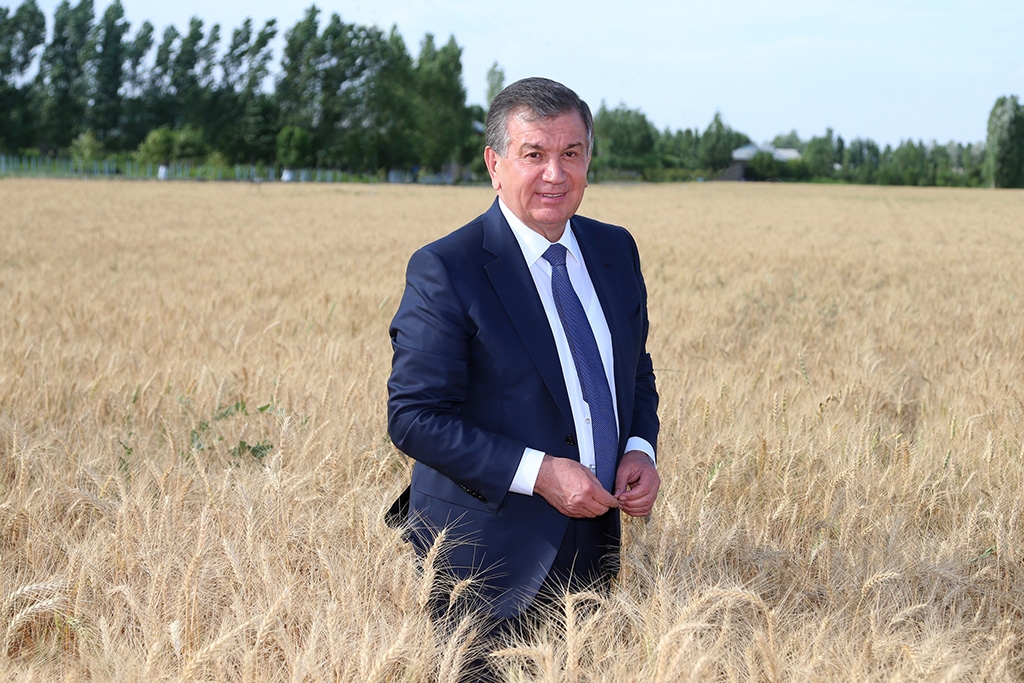 Out standing in his field: Mirziyoyev seen in the midst of wheat in an undated handout image. (Photo: Presidential administration)

The government in Uzbekistan has said it will from 2021 begin reducing the volumes of wheat it purchases through its state order system as it embarks on a gradual transition to market rules in its agricultural sector.

Wide-ranging reform plans outlined in a decree signed on January 28 by President Shavkat Mirziyoyev do, however, envision retaining a degree of state control to ensure grain prices remain stable and that staple food supplies are not interrupted. As of October 1, the government will enact a grain procurement system, to buy excess volumes of the crop and protect farmers from ruin, according to the document.

A definitive plan on how to nudge agriculture toward a market-driven regime is still in the making. Mirziyoyev’s decree has tasked several key ministries with designing a more market-responsive mechanism for setting prices for raw cotton, which remains Uzbekistan’s most important cash crop. Officials have until October 1 to submit their proposals to the Cabinet.

Around 70 percent of arable land in Uzbekistan is currently used for cultivating wheat and cotton, providing employment for around 130,000 farmers, according to research by the International Labor Organization, or ILO.

The bind endured by farmers arises from the way in which loans are provided by the state. Land, which is all state-owned, is leased out to farmers, who also receive concessional loans from the government to cover the costs of their input. In return, however, producers have been required to grow volumes of cotton and wheat as demanded by the government – the infamous quotas.

An arrangement based on seemingly abstractly conceived production targets has generated a cascading series of chronic problems over the decades, from inefficiency to corruption and abuse of workers’ rights to penury among farmers.

The amount of grain that the government buys from producers will begin to fall in 2021 and gradually diminish, as the “introduction of market mechanisms [begins] to ensure free competition in the purchase and sale of cereal grains,” the presidential decree stated.

The ILO has argued for the scrapping as production targets for cotton and wheat in the interests of eliminating incentives for forced labor – a practice that has over the years seen children, university students and government workers marshaled into the fields by local officials desperate to ensure quotas are met.