Uzbekistan tries – and mostly fails – to cope with shock winter

Meteorologists say Tashkent has not seen such cold in 50 years. 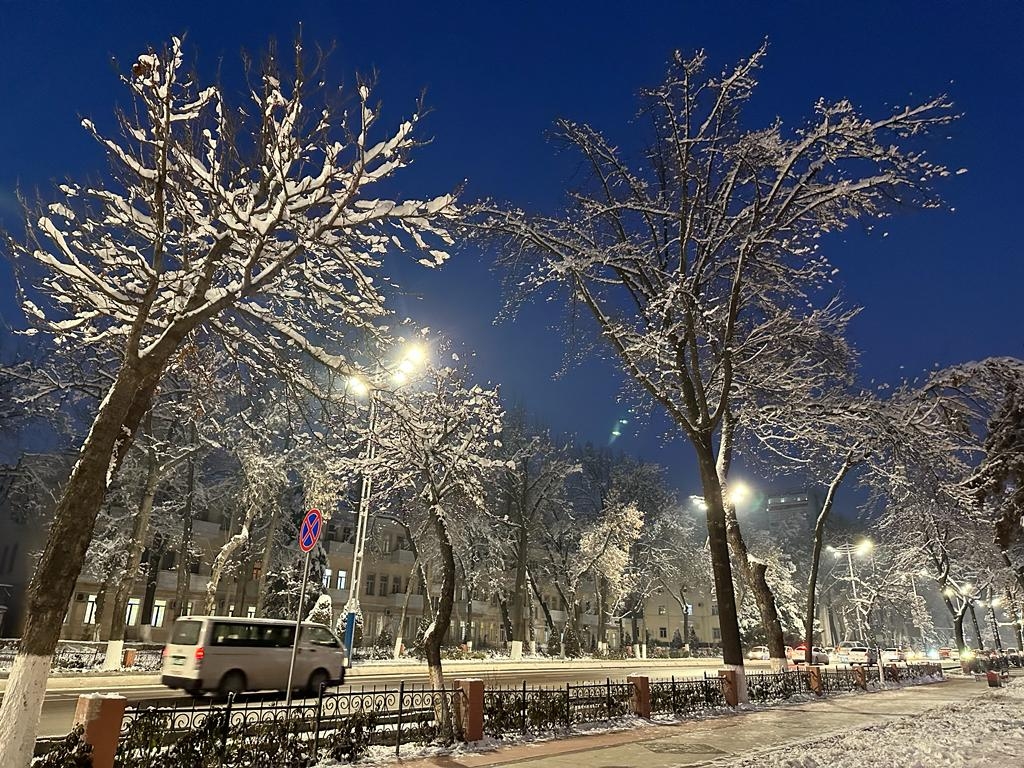 A chill in the air: Uzbekistan has not seen a winter like this in half a century. (Photo: Eurasianet)

Even though winter reliably arrives every year, it always seems to catch Uzbekistan by surprise.

That is being felt most keenly at the moment in the near-collapse of the energy system, which has seen countless households, including in the capital, Tashkent, left without electricity. Low pressure in the gas pipeline grid has made it difficult for people to keep warm.

The authorities cannot perhaps be entirely blamed. The cold front that descended from the north from around January 9 onward was the most severe in most people’s living memory.

The snow that carpeted the streets of Tashkent and other cities on that day quickly turned to sludge. Trees tumbled under the weight of the snow. Impassable roads caused traffic jams, which in turn dirtied the air.

The heavy precipitation stopped, but the cold weather persisted. And worsened.

By January 13, the capital was seeing temperatures as low as -19.8 degrees Celsius.

“This figure is the minimum temperature seen in the capital over the past half century,” said Munisa Askarkhojayeva, press secretary for the state meteorological service.

Things are easing now, weather experts say. Daytime temperatures are poised to rise above freezing, although they will stay at anywhere between -10 and -17 degrees Celsius for a few nights to come.

Over the duration of this crisis, many downtown Tashkent residents, particularly those with small children, have repaired to relatives in the outskirts, where the provision of power and gas has generally been more dependable. Those with the funds to do so checked into hotels. Anybody without these options has had to improvise any way they could, such as by cladding themselves with multiple layers of clothes.

Almost nobody has been spared. Businesses, school buildings, and hospitals alike have found themselves periodically cut off from the power and gas grid. Winter vacations at schools in multiple regions of Uzbekistan have yet again been extended through to January 23 pending an improvement in conditions.

Energy Minister Zhorabek Mirzamakhmudov has said that scheduled electricity blackouts are necessary to avoid a catastrophic failure across the entire grid like the one that happened in January 2022.

Filling stations have been periodically forced to shutter so that the authorities could set enough fuel aside for household use. Around three-fifths of motorists in Uzbekistan run their cars on methane. As a result, lines many kilometers long have tended to form outside any gas station remaining open.

Companies having to slow down activities or freeze their activities altogether have inevitably translated into job losses. This has in turn sparked the unusual sight of sporadic protests around the country.

To mitigate the simmering discontent, President Shavkat Mirziyoyev has this week resorted to laying off important officials, including Deputy Energy Minister Sherzod Khodjayev, the head of a power station network and three heads of Tashkent’s districts.

Neighboring Tajikistan is not having a much better time of it. Stories appear daily on social media about failures in the power grid.

This situation is especially problematic for city residents. As in Uzbekistan, urban dwellers are far worse prepared for the consequences of such breakdowns than people in rural areas, who usually rely on stoves for heating.

As Dushanbe-based newspaper Asia-Plus reported on January 17, things have been pushed closer to critical levels by Uzbekistan’s decision to suspend natural gas and fuel deliveries so as to provide for its own citizens.

Last week, power utility company Barki Tojik announced it was suspending the electricity-rationing regime so that people would be able to warm their homes, but at the same time it pleaded with the public to avoid excessive use so as not to strain the grid.

It does not appear as though everybody has taken heed of this appeal.