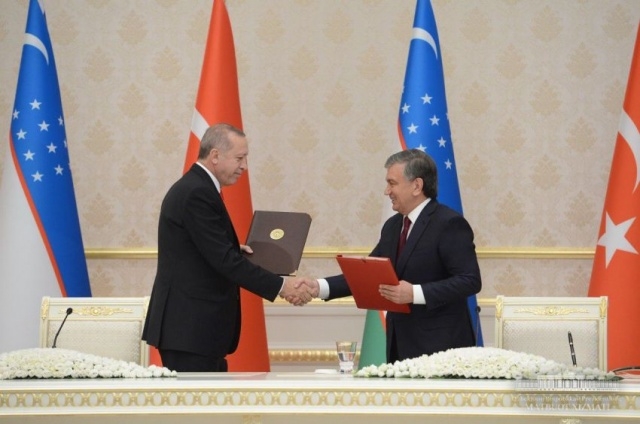 The renewed friendship between Turkey and Uzbekistan has generated a few more billions of dollars in deals and the promise of an imminent major increase in trade between the countries.

Speaking during his three-day state visit to Uzbekistan, Turkish President Recep Tayyip Erdogan said on April 30 that annual trade turnover could be pushed up to $5 billion “in the coming years.”

“In 2017, the volume of bilateral trade between our nations rose by 30 percent and came to $1.5 billion. And already in the first quarter of this year, we have seen the volume increase by 20 precent. These indicators show that we are on the right path,” Erdogan said. Addressing the Uzbek parliament, Erdogan said he wants to see more active partnership in industry, energy, agriculture and infrastructure.

His Uzbek host, Shavkat Mirziyoyev, said that companies from both nations had signed off on more than 50 investment projects worth a total of $3 billion. Mirziyoyev and Erdogan also sealed another 24 intergovernmental deals to increase cooperation in economic affairs, trade, transportation, science, education and tourism, among other areas.

Relations between the fellow Turkic nations have long been characterized by distrust, but Uzbekistan has latterly sought to cast itself as an investment haven to all and sundry. Erdogan paid tribute to those efforts, noting that “Turkish businesspeople are eager to get into Uzbekistan, which is creating copious opportunities for their firms and companies.”

Erdogan’s visit is a return of the same courtesy paid by Mirziyoyev, who traveled to Ankara in October. The two had met many more times before that though. They crossed paths at the One Belt One Road forum in China in May 2017. And then on the fringes of an Organization of Islamic Cooperation summit in Astana in September. Later that same month, they saw one another once more at the 72nd regular session of the UN General Assembly in New York.

The promising start to Uzbek-Turkish relations in the immediate wake of Uzbekistan’s declaration of independence was never quite fully capitalized upon. Turkish ambitions to project its strategic and cultural influence in an emergent Central Asia were dashed by the limitations of its economic heft. Ankara could never quite compete with a legacy player like Russia or, later, a rising China. And then there was the thorny personality of the late Uzbek President Islam Karimov, who bristled at the notion of outside parties attempting to set the agenda.

Still, Turkish entrepreneurs were assiduous in seeking their fortunes in Uzbekistan, among other markets in the the region. They hit a major speed bump around 2011, when the Uzbek government began to hound Turkish companies out of the country, expropriating their assets in the process.

The thaw is a propitious development for all involved. Erdogan is increasingly turning his back on the West. Deeper engagement with likeminded governments like the one in charge in Uzbekistan presents part of an appealing alternative. Uzbekistan, meanwhile, is courting anybody and everybody in its urgent campaign to shock its state-dominated economy out of sclerosis. Uzbekistan also appears eager to tap into Turkey’s vast experience in the tourism sector, as well as attract Turkish pilgrims to its holy sites.

At the moment, most of Uzbekistan’s exports to Turkey comprise non-ferrous metals, fruit and vegetables, nitrogen-based fertilizers and oil products. In the other direction, it is mainly mechanical equipment and electronics, textiles, pharmaceuticals, plastics and cosmetics.

One intent is to help expand that base by bolstering transportation links. In October, for example, Uzbekistan Airlines began running direct flights between Istanbul and Samarkand. Turkish Airlines started operating the same route in March.