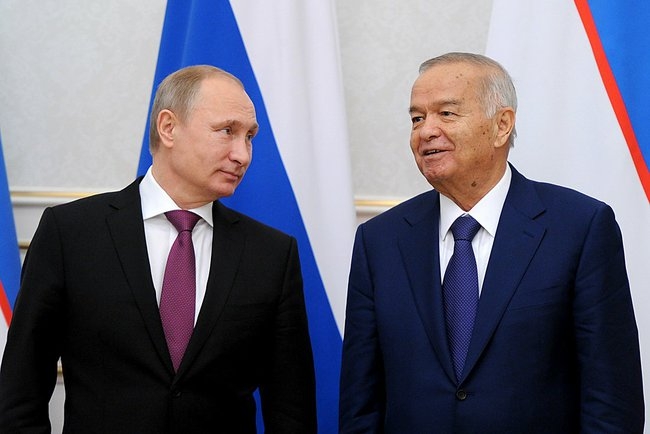 Uzbekistan appears to be increasingly relying on Russia for military equipment as the United States withdraws from Afghanistan without -- as Tashkent had hoped -- handing over some of its secondhand gear.

During Russian President Vladimir Putin's visit to Tashkent this week, the big news was that Russia would forgive almost $1 billion of Uzbekistan's debt in order to free up new credits for Uzbekistan to buy Russian military equipment.

What equipment might be under consideration isn't yet known, but Interfax suggested that "because of the existing security threats in Uzbekistan, the country may be interested in purchasing helicopters, armoured vehicles, air-defence weapons and small arms made in Russia." Information about arms purchases by Uzbekistan are very hard to come by; the think tank SIPRI, the most authoritative source on arms sales around the world, doesn't list Uzbekistan as having bought anything in the last 12 years.

An anonymous source "close to the Russian delegation" told Deutsche Welle's Russian service that "during the negotiations in Tashkent the expansion of military-technical cooperation was discussed by the delegations in detail." And part of the reason, the source said, is that Uzbekistan isn't getting what it hoped for from the U.S.:

Uzbek military specialists, seeing that the security situation in the region isn't improving, have begun to look more skeptically at the military capability of their armed forces. "There were hopes on the U.S., but the agreements on the handover of equipment used by NATO in Afghanistan didn't work out...."

There was much discussion over the past couple of years about the possibility of Uzbekistan being given leftover American equipment from Afghanistan, in particular Mine Resistant Armor Protected (MRAP) vehicles. The MRAP issue was high on the bilateral agenda as recently as a year ago, but now seems to have come to naught.

Apparently Uzbekistan and Russia discussed this week was the supply of Russian equipment to upgrade helicopters, Russian engines for both aircraft and ground forces, and Russian personnel to train their Uzbekistani counterparts on the new equipment, DW's source said, without providing details.

Another area in which military cooperation will expand is the education of Uzbekistani officers in Russian military schools, RFE/RL reported. Next year about 3,000 officers from Uzbekistan will study in Russia, up from about 500 now, the report said, citing an official from the Uzbekistan Ministry of Defense.

This, too, is about learning how to use Russian equipment: "At issue are heavy weapons systems and aviation, bought from Russia by Uzbekistan. To be qualified to use this technology, you need to study in Russia," another source, a former Uzbekistan military official now living in Russia, told RFE/RL.

While Karimov didn't specifically address Uzbekistan's military needs during Putin's visit, he did discuss the threat his country faced from Afghanistan, suggesting that ISIS could spill over into Central Asia, Reuters reported:

"Various elements among the representatives of Islamic State are already slipping into Afghanistan from Iraq and Syria. All this requires the adoption of appropriate preventative measures," Karimov said, without elaborating, at a news briefing with visiting Russian President Vladimir Putin alongside.

"The creeping expansion of militant extremism and religious radicalism, not only on the territory of the governments of Central Asia but also abroad, is most seriously concerning," Karimov said. "Russia's presence in Central Asia is undoubtedly an important factor to support peace and security."

Putin didn't go so far, mentioning only a general "terrorist threat" and drug trafficking emanating from Afghanistan. Interestingly, a U.S. diplomat who visited a few days before Putin did suggest that ISIS may pose a threat to Uzbekistan. "This is a dynamic moment in Central Asia and across the Asian landscape broadly. We are facing tremendous challenges such as the threat of extremist organizations like ISIL," said the official, Assistant Secretary of State for South and Central Asian Affairs Nisha Biswal, at a press conference. And at another event in Tashkent:

The United States has made a firm commitment to support Uzbekistan and enhance its capabilities to defend its sovereignty and independence. We had a very good discussion on the political dimension - how we can work together as governments as the broader aspects of our relationship, how we can work together to address shared challenges. Challenges like ISIL, which threaten both of our societies.

It's also not clear what of Uzbekistan's capabilities the U.S. is working to enhance, but currently U.S. security assistance is focused on relatively modest GPS equipment, body armor, and small surveillance drones, not the heavy equipment that Russia seems to be offering. Germany and France apparently were in discussions this year about selling military helicopters to Uzbekistan, but for the most part military aid and sales to Uzbekistan from the West have been hindered by human rights concerns.