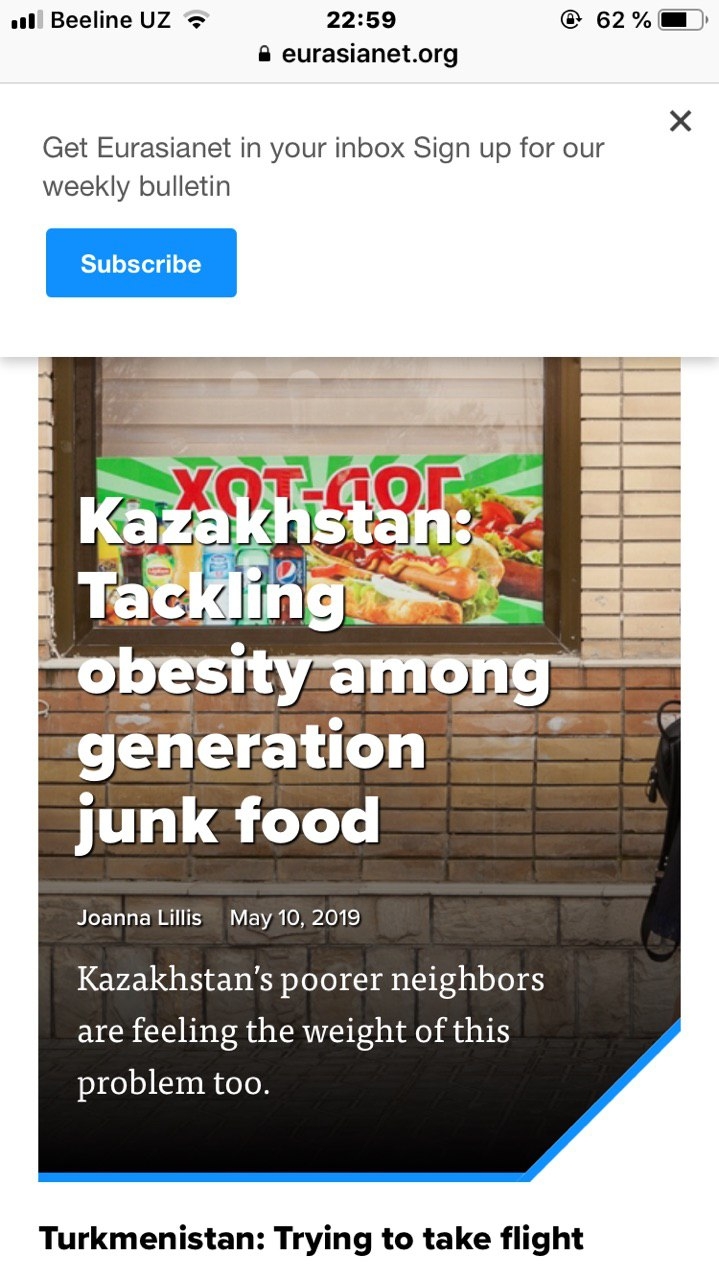 A screenshot of our homepage this weekend from a mobile phone in Uzbekistan.

Uzbekistan has unblocked at least 11 independent websites that had been inaccessible for over a decade, including Eurasianet, Fergana News, Human Rights Watch and the BBC’s Uzbek service.

However, both Radio Free Europe/Radio Liberty and its Uzbek service, Ozodlik, remain inaccessible.

The head of the Agency for Information and Mass Communications, Komil Allamjonov, whose office is part of the presidential administration, announced the lifting of restrictions on May 10 via social media channels that were themselves blocked until earlier this year.

Allamjonov blamed the blockage on “certain technical issues” that had come to light after the OSCE Representative on Freedom of the Media, Harlem Désir, last month wrote to remind Uzbekistan of its international commitments to a free press. In his statement, Désir noted that the government has no clear set of rules for determining if a website should be blocked.

Similar statements from well-intentioned Western officials are routine in Central Asia. Unusual is Uzbekistan’s quick and public response. Kazakhstan, which chaired the OSCE a few years ago, regularly blocks and unblocks websites, but officials rarely comment on their reasoning.

Allamjonov appears invested in international public opinion. Earlier this month on Facebook he highlighted Reporters Without Borders’s latest press freedom index, which ranked Uzbekistan 160th of 180 globally. Last year, the country ranked 165th; the year before it was 169th, he added.

The annual report, Allamjonov wrote, “noted that Uzbek journalists have begun covering such pressing topics as corruption and forced labor, but self-censorship is still seen in the media sphere. This means that we still have much to accomplish to ensure freedom of speech and protect the rights of journalists. After all, painful topics can be covered only when the media feel supported and protected.”

He then goes on to say: “I think this report should become for us a kind of mirror reflecting the situation with freedom of speech in the republic. And we need to make progress in this area. After all, all … the ongoing reforms [in Uzbekistan] are closely related to freedom of speech and the press.”

Some observers are skeptical.

“The unblocking of some media websites and [those of] human rights organizations is not a sign of democratization or the ‘wisdom’ of Allamjonov, but simply an effort to create a positive impression before the visit of German President [Frank-Walter] Steinmeier [this month],” political analyst Rafael Sattarov wrote on Facebook.

Who is behind – or against – a given reform is murky business in Uzbekistan, even if most observers agree the country has made great strides since long-serving strongman Islam Karimov died in 2016.

A few days before Allamjonov’s announcement, a Tashkent website reportedly close to the Communications Ministry alleged that the former head of the security services – Ikhtiyor Abdullayev, who had been fired in February, perhaps for tapping President Shavkat Mirziyoyev’s phones – had been the one to order websites blocked.