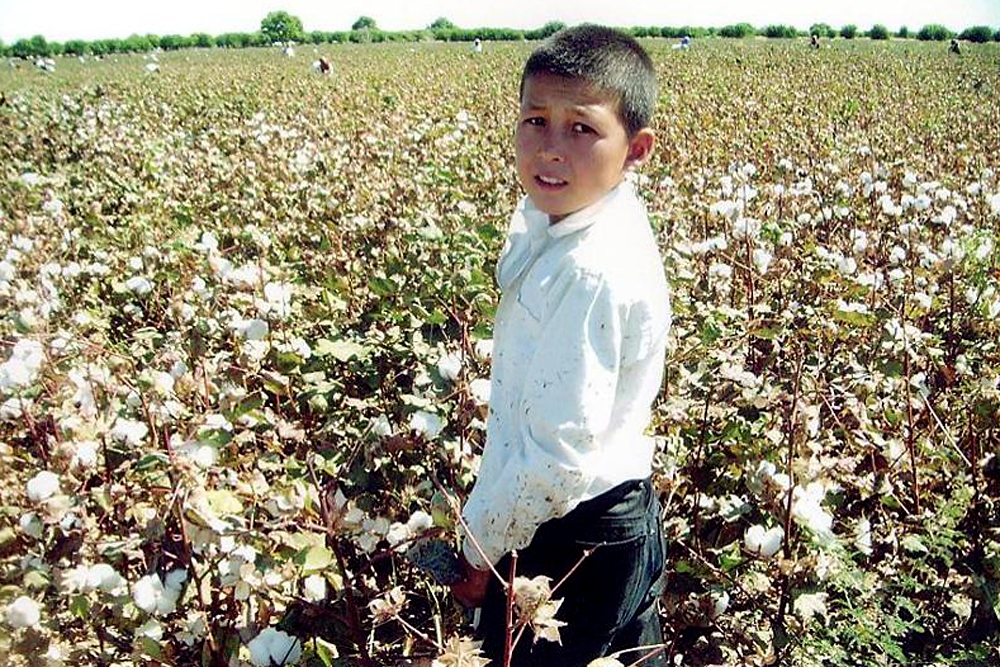 Uzbek authorities use children during the annual cotton harvest despite international condemnation of the practice. (Photo: Uzbek-German Forum for Human Rights)

After taking a PR battering recently about its ongoing use of children to harvest cotton, Uzbekistan is now contending with intensifying international scrutiny of its forced labor practices.

The cotton harvest is in full swing in Uzbekistan. That means officials are pressing legions of school-age children into service to pick bolls, rather than allowing them to hone reading, writing and math skills, rights activists contend. For activists, the use of child labor is old news. But they are cheered by the fact that international awareness of the issue is higher than ever. And increased attention is translating into pressure on Tashkent to end the practice.

Uzbekistan is a signatory to international conventions banning the use of child labor. However, President Islam Karimov’s administration has long resisted allowing International Labor Organization (ILO) monitors to undertake a monitoring mission in Uzbekistan.

This year, the United Nations Children’s Fund (UNICEF) is attempting to observe the cotton harvest. UNICEF is stressing, however, that the UN agency’s efforts cannot serve as an adequate substitute for an ILO mission report.

“UNICEF will inform the authorities about the findings,” the agency said in a statement emailed to EurasiaNet.org. “The [harvest] season has started recently and no conclusions can be extracted yet. UNICEF, at the time of writing, has sent observation teams in different regions. These observations are snapshots that cannot replace a substantive and independent monitoring survey under the auspices of the ILO.”

UNICEF continues to advocate for Tashkent to allow ILO inspectors into the country, the statement emphasized.

Critics contend that Tashkent’s assent to UN and ILO conventions are mere window dressing that is designed to appease Western concerns while preserving the status quo on the ground. This year, as in past years, there have been credible reports of the mass mobilization of children for the cotton harvest. Rights groups have already documented children harvesting cotton, and an eyewitness told EurasiaNet.org of seeing a bus full of schoolchildren heading for cotton fields outside Tashkent on September 21.

A turning point in efforts by rights groups to end the use of Uzbek child labor perhaps occurred earlier in September in New York, where human rights protesters and The New York Post ganged up on Gulnara Karimova, the daughter of the Uzbek president, to derail a planned fashion show. “So long, torture victims. Hello, fashion victims!” quipped one New York Post story.

Amid a blitz of scathing media coverage, organizers of New York Fashion Week cancelled Karimova’s show, tactfully citing security concerns. Image concerns must also have played a role, as protesters highlighted the irony of Karimova unveiling her luxury Guli Collection at the same time children were being bussed into the cotton fields in Uzbekistan. Karimova subsequently held her show at a private venue in New York’s Midtown as protestors gathered outside to denounce forced child labor.

The episode also fueled interest in a campaign to boycott Uzbek cotton. Rights campaigners say that over 60 multinational retailing firms have now signed a pledge to avoid knowingly using Uzbek cotton in apparel that they sell. “We commit to not knowingly source Uzbek cotton for the manufacturing of any of our products until the Government of Uzbekistan ends the practice of forced child labor in its cotton sector,” the pledge states.

The initiative is spearheaded by the Responsible Sourcing Network (RSN), a watchdog group whose director, Patricia Jurewicz, lauded participating companies for “sending a message about sourcing all aspects of their products ethically.”

According to RSN data, over 2 million children, some as young as seven, are forced annually into the cotton fields, where they “face 10-hour work days, exposure to harmful pesticides, and risk physical harm or expulsion from school if they fail to pick a quota of up to 100 pounds of raw cotton per day.”

Since supply chains are notoriously hard to track, rights campaigners caution that the key word in the RSN pledge is “knowingly.” The campaign has the potential to deliver a big economic blow to the Uzbek economy. In recent years, however, Tashkent has taken steps to hedge against the boycott by shipping an increasing amount of its cotton to the Middle East and Asia.

Cotton is a crucial cash crop for Uzbekistan, the world’s fifth largest producer and second largest exporter, according to data from the United Nations Conference on Trade and Development (UNCTAD). Cotton accounts for about 11 percent of Uzbekistan’s GDP of $39 billion, making the industry worth an annual $4 billion.