Since the Taliban seized power last summer, Uzbekistan has favored engagement over isolation. 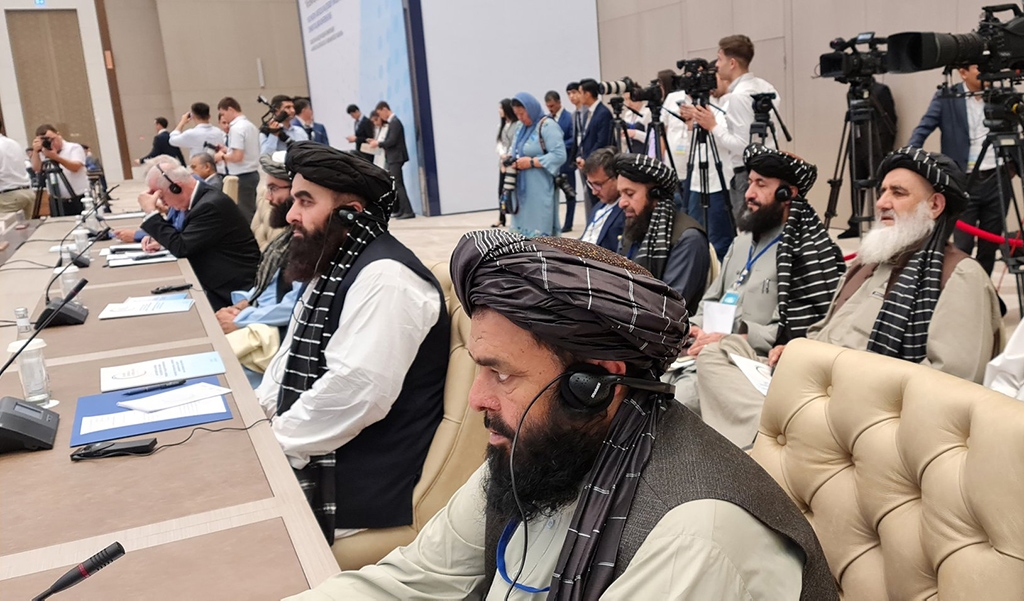 President Shavkat Mirziyoyev called on the Taliban to sever ties with terrorist groups as Uzbekistan hosted an international conference on Afghanistan on July 26.

“We urge the current government of Afghanistan to demonstrate firm will and take decisive measures to prevent and counteract terrorism in all its forms and manifestations, and to break off ties with all international terrorist organizations,” Mirziyoyev said in a message read by Abdulaziz Komilov, his foreign policy envoy.

“Without stability on the other shore of the Amu Darya, it is impossible to achieve security and sustainable development in Uzbekistan and in the whole Central Asian region,” he added, referring to the river that marks the border between the two countries.

Border security is a top concern for Tashkent after the southern city of Termez was shelled in early July, an attack thought to be the work of anti-Taliban militants operating inside Afghanistan.

A group called Islamic State Khurasan Province has previously claimed responsibility for rocket attacks on a military unit near Termez.

Since the Taliban seized power last summer, Uzbekistan has favored engagement over isolation, but has stopped short of recognizing a regime that is an international pariah.

“We are convinced that the international community can and should avoid repeating the mistakes of the 1990s,” when the world shunned the Taliban during its first period in power, he said.

The world should “encourage and support” the Afghan government’s efforts to improve the country’s socioeconomic situation and “establish friendly relations with neighboring states and mutually advantageous cooperation with the international community.”

Mirziyoyev also spoke of the need for Afghanistan’s “integration in interregional economic processes and the realization of infrastructure and socially significant projects.”

One project that may start moving forward is the construction of a power line that would allow Uzbekistan to up its electricity exports to Afghanistan. The project stalled after the Taliban takeover.

Construction inside Uzbekistan is complete, and it has now been agreed that building will begin in Afghanistan by the end of August, Uzbekistan’s Energy Ministry said.

Tashkent is also eager to push ahead with a trans-Afghan railway line linking Uzbekistan with Pakistan, which Mirziyoyev has called the “Project of the Century.”

Mirziyoyev also spoke of the need for the Taliban to form a representative government and assure the rights of people of all ethnic and religious groups, “especially women.”

“The international community is committed to a stable, peaceful, and inclusive Afghanistan that respects the human rights and fundamental freedoms of all Afghans – including women and ethnic and religious communities – and that prevents terrorist threats from Afghan soil.”

He claimed the group had managed to assure security inside Afghanistan, reduce corruption “practically to zero” and “for the first time in the history of Afghanistan” proclaim a “policy of tolerance.”

He urged the U.S. to unfreeze billions of dollars’ worth of frozen assets, something Mirziyoyev also supports.

Zamir Kabulov, Russia’s Afghanistan representative, used the occasion for point-scoring by demanding the U.S. return frozen assets that he said were “essentially stolen.”

“Just imagine – in a country where citizens live on less than $1 a day, stealing $7 billion. That is simply a crime,” claimed Kabulov, whose own government stands accused of mass theft of grain from Ukraine.

Overall, Mirziyoyev concluded, the “common priority should be the restoration of the economy of Afghanistan, which is an important condition for achieving durable peace in this long-suffering country.”