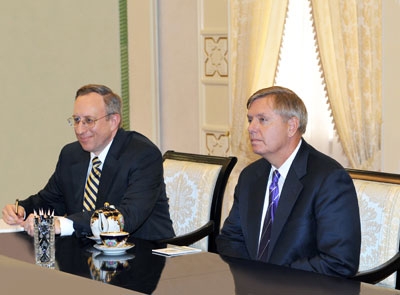 US Sen. Lindsey Graham, a Republican from South Carolina was received by President Islam Karimov at his residence in Tashkent on August 27, Uzbek state media reported. Ambassador George Krol, the new US envoy to Tashkent, also attended the meeting. Uzbek TV quoted Karimov as saying Uzbekistan “highly values relations” with the US and has seen “great positive things in our relations, especially most recently.“ According to the typically filtered government reports, the American senator was said to discuss resolution of the conflict in neighboring Afghanistan and ways to stabilize the region.

Gov.uz quoted Graham as stressing the importance of economic renewal and solving social problems in Afghanistan. While official reports didn't specifically mention the Northern Distribution Network (NDN) which supplies NATO soldiers in Afghanistan, no doubt the senator discussed Tashkent's crucial role in helping the NDN. Uzbekistan is known to serve as a key transit air hub through Termez and has supplied food and fuel by train as well. The US has been actively involved in promoting business and economic opportunities around the NDN, seeing it as important to security of the region and an evenutal "Silk Road" to prosperity.

Sen. Graham is not a member of the Central Asian Caucus in Congress. Yet he is on the Senate Appropriations Committee, and could have a role in deciding whether and how much US assistance is given to the Uzbek government. Under legislation passed in 2004, US military assistance is banned until progress is certified in Uzbekistan on human rights and economic reforms.

Graham, a military lawyer who actually performed an active-duty stint in Afghanistan last year, appears mainly concerned over South Carolina's failure last year to obtain federal funds for public school jobs and a U.S. Army Corps of Engineers study to deepen the Charleston port, McClatchy reports. Yet his position on a powerful Senate committee means he will also have a say in funding the Pentagon, the war in Afghanistan and other related projects like helping Uzbekistan.

Following the Andijan massacre in May 2005, the conservative Sen. Graham accompanied Sen. John McCain (R-AZ) and other US senators to meet with Uzbek opposition members and eyewitnesses, and called for a complete investigation in the atrocities, saying at that time that continuation of the relationship was "very difficult, if not impossible, if a government continues to repress its people," airforce-magazine.com reported. Uzbek officials refused to meet with the senators, and ultimately served an eviction notice on the US, which left the Karshi-Khanabad (K2) airbase it had been leasing.

The question is whether the US needs Uzbekistan so much that it will start waffling on the aid certification. While the State Department is likely to continue to name Uzbekistan a "country of particular concern" (CPC) for its violation of religious freedom, it failed to downgrade Uzbekistan on its annual assessment of global trafficking in persons, despite Tashkent’s lack of progress.

Uzbekistan has not done anything substantive to improve its human rights record , but it has done the next best thing, shy of actual change: created a commission to monitor allegations of the use of forced child labor -- which it continues to deny despite reports -- and drafted a national human rights action plan .

The "action plan" is a creature of multilateral institutions as well as bilateral relations, where foreign interlocutors try to devise "benchmarks" or incremental steps towards eventual human rights compliance by urging the drafting of plans, training seminars, and progress reports. Like other massive abusers of human rights, Tashkent has learned that just the gesture of drafting a plan, without at all putting it into practice, is enough to keep its foreign critics happy. The new plan contains easy giveaways like a pledge to honor international legal standards over local law -- but not release from prison or registration of the activists who actually ensure such rights are protected. Even so, some human rights lawyers are hoping to take the government at its word to push for reforms, and the State Department can now point to this "progress."

While a few political prisoners have been released from imprisonment in a token gesture, other human rights activists and religious believers continue to be harassed and imprisoned, making certification hard to envision.