Uzbekistan: When will Bukhara’s Jews get their own museum?

One argument for opening a museum is to foster a better awareness of history among the remaining Bukharan Jewish community. 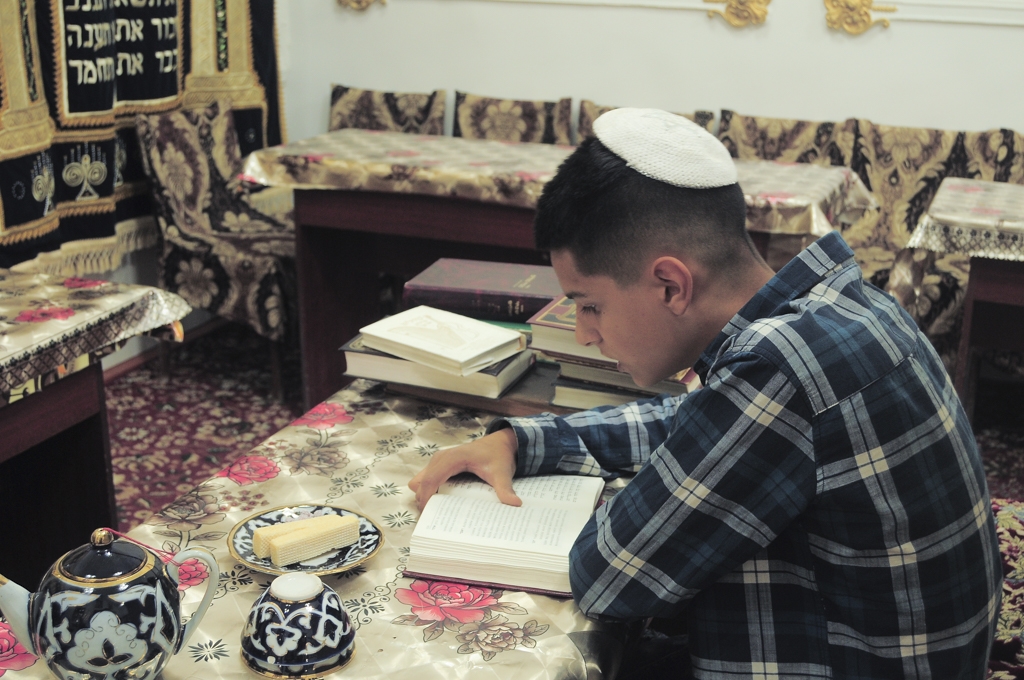 Benyamin Badalov, 13, is a faithful attendee at Hebrew school on weekends. (Eurasianet)

As twilight descends on the old quarter of Bukhara just off the bustling Lyab-i Hauz square, the hum of Hebrew prayer rings around the narrow lanes.

The sound comes from the synagogue, a small place of prayer with a long history. At best, the prayer room could squeeze in 40 people. One recent Friday evening, when a Eurasianet correspondent visited, a congregation of around only a dozen gathered to usher in shabbat.

The four-century-old synagogue’s prized possession are the two ancient Torah scrolls that have survived centuries of war, capricious emirate rule and revolution. For all that they are treasured by the community, the scrolls hold a modest place in a simple glass cabinet.

Rabbi Abram Iskhakov claims the documents may be a millennium old – likely an overstatement.

“Even in Israel, or America, there are not such ancient copies of the Torah. But we Bukharan Jews have been able to preserve them. This was dangerous to do in Soviet times. People risked their lives. But this shows that fear of communism was not as strong as respect for God and religion,” Iskhakov told Eurasianet.

Iskhakov said one of the scrolls was stolen once, in 2009, but that the thieves were quickly tracked down and the precious relics returned safe and sound.

Robert Almeyev, an expert on Bukharan history, believes it is past time that an ethnographic museum be created to memorialize this fragile and fading part of the city’s legacy.

Almeyev, a 72-year-old son of Bukhara, is a seasoned curator of museums and has played a role in creating a dozen of them in the city. Back in the mid-1990s, he began to promote the idea of opening an ethnographic museum in the Jewish quarter. It took six years before city authorities gave their blessing to the proposal.

“I worked out the whole concept for the museum. We chose a site, the home of a wealthy Jewish trader that lived there a century earlier. We worked out everything down to the details – the layout, the exhibits. Everything was ready. And then, I don’t know why, the whole thing came to a halt. Now the venue has been converted into a restaurant,” Almeyev said.

The origin story of Bukhara’s Jewish community is disputed and complicated. Almeyev’s favored notion is that they arrived two centuries before the Arab conquest of the early eighth century. Some, a little fancifully, suggest a much earlier date.

Any serious effort to document this convoluted history will require concerted efforts of historiography that chart not just the movements of Jews but also the waves of repression and efforts at forcible conversion that they confronted.

But Almeyev would also like for a museum to recognize the diversity of Jewish life in Bukhara, which took in trade, banking, medicine and music.

“Their most outstanding craft was dyeing silk and cotton fabrics. They were especially famous for making transparent silk fabric from which women's scarves were then sewed,” he said.

In 1989, according to the last Soviet census, there were more than 28,000 Jews living in Bukhara. By the turn of the century, the number had collapsed to under 10,000. The community keeps on dwindling, and fast.

Many of those that left, however, maintain a lively interest in their place of origin.

“Our history is vanishing. It is imperative that we preserve everything that is left. Our brethren, missing their historic home, come visiting from Russia, America and Israel. But if we built a museum, it would be so much more interesting for them,” Bukhara resident Shirin Yakubova told Eurasianet.

European Union and Israeli passport holders have since 2018 been able to visit Uzbekistan without getting a visa. The Israeli tourist market should be especially appealing. The Israeli ambassador in Tashkent said in an interview last year that there are 250,000 people living in his country that moved there from Uzbekistan.

One other reason for wishing to create the museum though is to foster a better awareness of history among the remaining Bukharan Jewish community. Yakubova said that young people especially are often ignorant of their ancestors’ story, and this decline of remembrance has been worsened by the departure of so many people.

There are a few outliers though. Benyamin Badalov, 13, is a faithful attendee at Hebrew school at the weekend. He too is frustrated by the lack of a museum.

“It is odd that they call Bukhara a museum-city, but still we do not have a museum for our own people. Maybe somebody could put together an online guide to the history of Bukharan Jews? That way anybody and everybody could learn about the presence of Jews in this city,” Badalov said.

Officials at the Bukhara city administration do not even remember that any decision was taken on a museum two decades ago.

“We would need to go into the archives and try to dig up this document,” Vahid Niyazov, a representative of the city administration, told Eurasianet. “There is already a cultural center for Bukhara Jews. But they too should be actively working to open this ethnographic museum.”