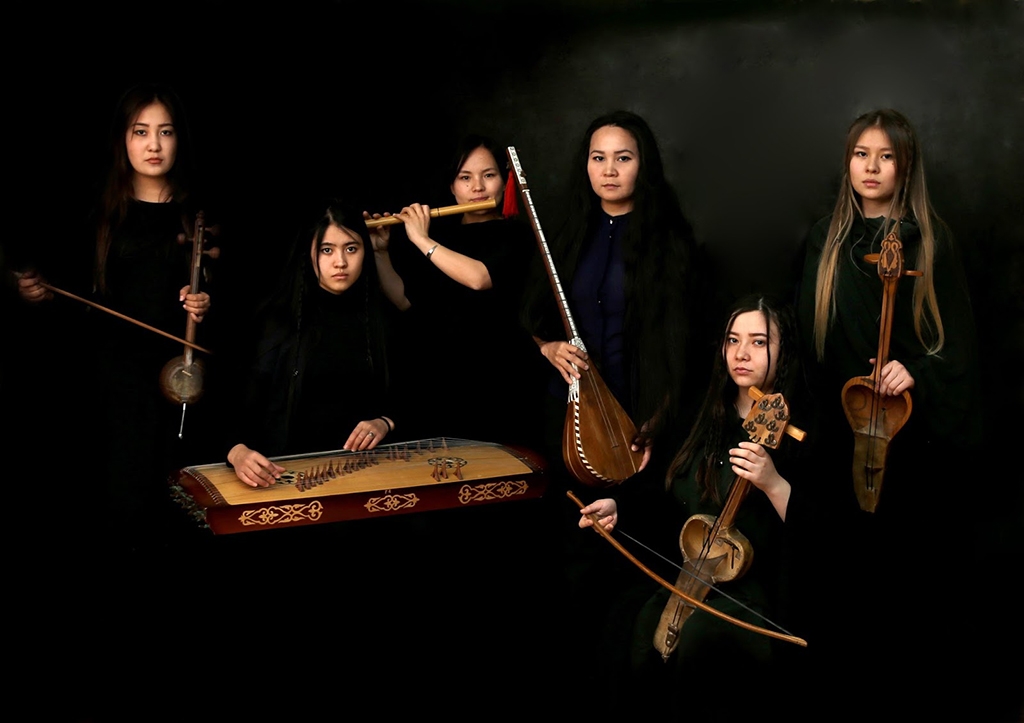 In space, Uzbek artist Saodat Ismailova is poised between Central Asia and Europe. The stories she wants to tell are ancient. Her tools are modern.

As Ismailova told Eurasianet in a recent interview in Tashkent, she sees the generation before her as a wellspring of inspiration. Her father was a cinematographer. Her grandmother was a storyteller.

“My grandma was always telling stories,” she said. “She was the key person in my development.”

Ismailova, 38, moves easily through artistic mediums. She has made feature films, documentaries, video installations and, in a synthesis of those forms, multimedia performances.

One work she has taken around the world and now brought back to Uzbekistan, to Tashkent’s Alisher Navoi theater, is Qyrq Qyz, which was produced by the Aga Khan Music Initiative. The tale of the forty female warriors of the title is evoked by an all-woman troupe playing mournful melodies on traditional instruments and singing against a film background of the haunting, barren landscapes of Karakalpakstan.

Ismailova left Uzbekistan in 2002. That was when she was invited to a residency at Fabrica – an art commune established by the clothing tycoon Luciano Benetton and photographer Oliviero Toscani in the northern Italian city of Treviso. She has lived in Europe ever since, basing herself in Paris.

Her filmmaking style borrows from the palette of uber-meditative cineastes Andrei Tarkovsky and James Benning, but transplants their moody, slow-burning gaze to a Central Asian setting.

Not that this has always been easy.

“In 2011, I wanted to shoot my first feature movie in Uzbekistan. My project was supported by various international foundations. I came to Uzbekistan with my producer, but we didn’t get permission to shoot,” she said.

It was a cruel proscription for this most itinerant of creators.

Her instinct to document has sent her exploring most corners of Central Asia, from the Pamir highlands to the Kazakh steppe, and beyond, in Azerbaijan, hearing and collecting folktales in all their iterations.

“It is important to travel, because what we see in the city is a synthetic process. In the regions, there are still people who are carrying the stories within them. They are carriers of memory, history, knowledge and associations,” Ismailova said.

The Amu-Darya River, the cradle of civilization in the region, and the Turan tiger hunted into extinction are recurrent motifs.

The atmosphere in Uzbekistan is a little more forgiving for Ismailova these days. In April, the Center for Contemporary Art in Tashkent hosted an exhibition of her work titled “Light on the Hill.” Another Tashkent exhibition, in spring last year, held on the grounds of the renowned Ikhom Theater, was titled “Syncretic Verses” and described female spiritual practices of the region through photos, video installations and sculpture.

There is little sense of anger in Ismailova’s mission to recover and preserve female oral traditions.

Not that Ismailova favors any manner of prescriptivism. The very title of Ismailova’s 2014 Tajik-language debut feature film, 40 Days of Silence, is amply suggestive about the subdued, pauciloquent tone of her cinematic output.

Literature accompanying Zukhra, Ismailova’s 32-minute video installation at the 2013 Venice Art Biennale, invites viewers to “actively participate in [the] experience” of the onscreen image showing a woman lying motionless in the twilight.

“My works don’t impose ideas. I’m not trying to define things. On the contrary, it’s an attempt to draw in the viewer and let them communicate with their inner self,” Ismailova said. “For me it’s an act of respect towards the viewer. And it’s a way to make the viewer more active although they seem to be passive.”

Ismailova is now working on the script of her second feature film, provisionally titled Barzagh, and developing a multimedia solo performance with elements of dance and traditional and electronic music. And she is working on a book. All these efforts are somehow drawing on the oral tradition, she said.

For Ismailova, there is more to be explored around the totemic imagery of the Turan tiger, which was the thematic thread that ran through her 2017 film essay The Haunted. But the extinction of this animal is recent – it likely happened around the 1970s – and there is collective creativity to be harvested in the albescent peripheries of popular memory.