If Uzbekistan wishes to attract big-ticket investors, a recent telecoms deal is sending the wrong message. 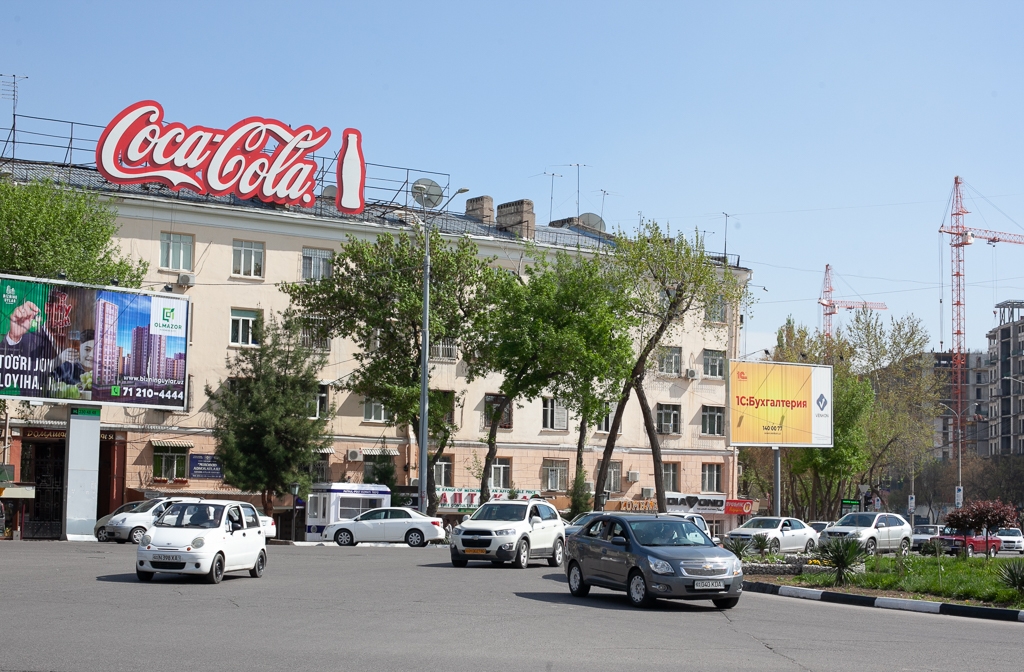 It's the real thing? The government has touted the Coca-Cola sale as a benchmark for its privatization drive. (Eurasianet photo)

Uzbek officials were jubilant at an economic forum in September designed to showcase their country to investors.

They had just signed a landmark deal, selling a majority stake in Uzbekistan’s Coca-Cola franchise to a Turkish firm for $7 million above the valuation. It was the perfect way for Tashkent to rejuvenate its flagging privatization campaign, announced in 2019 but plagued by logistical challenges.

The September 29 deal is “one of the first successful examples of privatization,” enthused Akmalkhon Ortikov, director of the State Assets Management Agency (SAMA), the government body that controls over half of all Uzbekistan’s economic assets.

But another deal closed the same day sent mixed messages, as Tashkent placed a strategic concern into the hands of a powerful Russian oligarch of Uzbek origin, who is related by marriage to President Shavkat Mirziyoyev, without a tender.

That agreement gave companies controlled by Alisher Usmanov a 51 percent stake in a joint venture which acquired the Ucell telecoms company, in exchange for a $100 million investment.

“Ucell was not sold, but restructured,” SAMA spokeswoman Nozima Turabaeva told Eurasianet when asked why the government performed the sale without a tender.

“They acted [this way] because our share still remains in this company. So it was not considered necessary to privatize it fully.”

Olimjon Umarov, at the time an adviser to the prime minister, hailed the arrival of a “powerful player” like Usmanov’s MegaFon, Russia’s second largest cell operator, on Uzbekistan’s telecoms market, bringing “cutting edge technological solutions” as Tashkent pursues the “digital transformation” of the economy.

But the behind-closed-doors sale of Uzbekistan’s largest cellular operator to companies controlled by Usmanov, whose deceased nephew was married to Mirziyoyev’s niece, raised eyebrows about potential cronyism in the privatization process.

“This is exactly the kind of development that can put off investors,” said Ben Godwin, head of analysis at PRISM Political Risk Management, a London-based consultancy, noting that the country has not yet attracted the kind of “major tentpole investment […] that would signal to other investors that the conditions are right.”

By 2025 it hopes to privatize, fully or partially, 75 percent of Uzbekistan’s nearly 3,000 state-owned enterprises (SOEs) and other assets, such as property. Many are small firms, but also up for sale are large enterprises in strategic sectors including energy and power generation; mining and minerals; and transportation.

The government’s sway over the economy is a legacy of statist policies pursued by the late Islam Karimov during his 25-year rule, which Mirziyoyev is rolling back. SOEs account for 55 percent of Uzbekistan’s economy. In the banking sector, that rises to a whopping 85 percent, which Tashkent wants to reduce to 40 percent.

It scored a success with another agreement inked during September’s economic forum, paving the way for Hungary’s OTP Bank to acquire a majority stake in Ipoteka Bank, Uzbekistan’s fourth largest.

The size and value of the acquisition have not been confirmed, but officials have talked of selling a 75 percent stake. OTP “will buy what the Uzbek government is going to sell,” Laszlo Wolf, its deputy chief executive, told Reuters.

The deal is close to completion, Alexander Picker, chairman of Ipoteka Bank’s Supervisory Board, told Eurasianet on November 1.

“This is the first opportunity for a large foreign bank to be present on the market,” he said.

Kazakhstan’s Halyk Bank was the first private foreign lender to enter Uzbekistan, but is a minnow compared to OTP.

The thinking is that Uzbekistan’s underdeveloped financial sector will gain modern expertise and technologies as more investors take the plunge.

OTP will have what Picker called “first-starter advantage” – a competitive edge – with its early foray into Uzbekistan just as “the mortgage market is booming” and the retail market offers “huge opportunities.”

Picker’s appointment was part of efforts to boost investor confidence that included overhauling the bank’s procedures to raise them to international standards.

Many large SOEs require radical reforms to make them attractive to investors.

“They need to return regulatory functions back to the state, shed non-core assets, in some cases break up enterprises into more logical commercial units, introduce modern governance, management, and accountancy practices,” Godwin said.

Officials have blamed the laborious process of preparing SOEs for privatization, alongside the coronavirus pandemic, for delays.

In February Mirziyoyev ordered them to accelerate and shed 1 trillion sums ($94 million) worth of assets by July. They exceeded that target and sold off $105 million, compared to only $150 million raised through privatization over the previous four years.

Generating revenue, while welcome, is not the main goal, however.

“It’s about efficiency,” Finance Minister Timur Ishmetov said recently. “The faster we will get rid of inefficient SOEs, the better for us.”

As Tashkent abandons “protectionism to open the market,” in Ishmetov’s words, unpopular measures are inevitable.

There will be “tremendous institutional resistance to these reforms” within the SOEs, Godwin warned. “Moreover, to generate the highest market value for each enterprise, SAMA will have to consider significant efficiencies, meaning layoffs – a potentially serious social concern for the country.”

“With all the will in the world,” Godwin concluded, “this would be a momentous task.”