The president said the World Chess Olympiad winners in Chennai had left “a huge mark on history.” 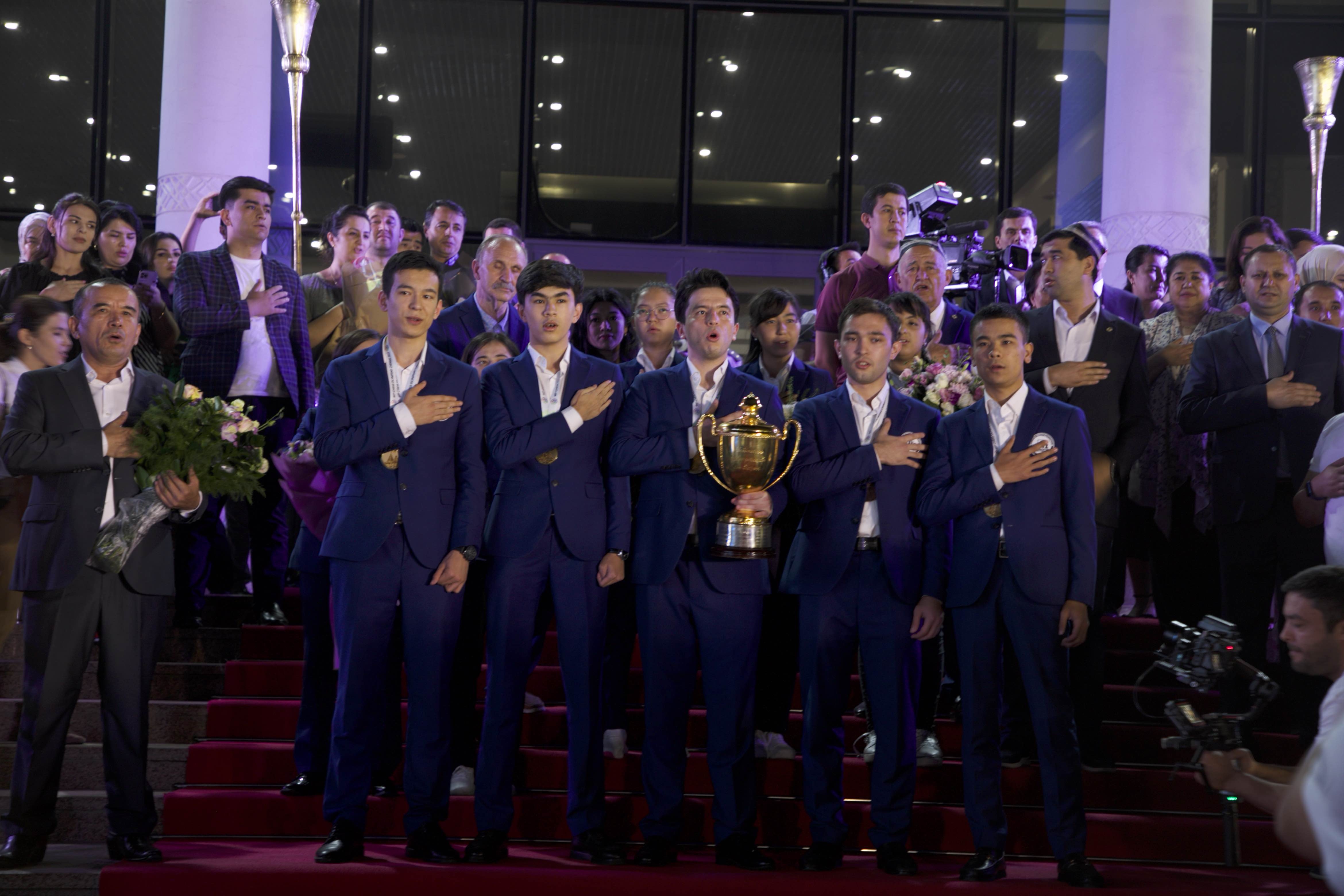 The winning team after their arrival in Tashkent. (Photo: Eurasianet)

On August 11, a five-man team of Uzbek players returned to Tashkent to a rapturous welcome after achieving victory at the 44th World Chess Olympiad in Chennai, India.

The welcoming delegation at the airport included Prime Minister Abdulla Aripov, who conveyed the best wishes of the president and bestowed yet more awards on the winning team comprised of Jahangir Vakhidov, Nodirbek Abdusattorov, Nodirbek Yakubboyev, Javahir Sindorov and Shamsiddin Vakhidov.

The prizes included a pot of 600 million Uzbek sum ($60,000), Chevrolet Equinox SUVs, and state-issued Iftikhori medals of honor for all the team members.

After the triumphant players were done with the prize-giving at Tashkent International Airport, they spoke to the press. Abdusattorov talked about his comeback against a team from India and promised that they would endeavor to repeat their feat in future competitions too.

“On behalf of the team, I would like to thank our president and our people for their support. We felt your trust in every game. Our team became the champion competing among more than 180 countries without losing a single time. This is our first victory. We have proven that we are not inferior to anyone,” he said.

The Uzbek team’s victory in the Olympiad was secured through their defeat of a team from the Netherlands in the final.

The Uzbek women’s team finished 31st out of 162 teams and were also given awards upon their arrival in Tashkent.

Before the quintet left India, they received a call from President Shavkat Mirziyoyev, who congratulated them and told them they had left “a huge mark on history.”

Plaudits came from an even more august personality – in chess terms at least.

The last time Uzbekistan came away from a Chess Olympiad with prizes was in 1992, when they won silver at the competition in Manila, Philippines.

The hope now is that this achievement can consolidate enthusiasm for the sport ahead of the 46th World Chess Olympiad to be hosted by Uzbekistan in 2026. Uzbekistan managed to pip India and Hungary to that honor at a vote in the General Assembly of the International Chess Federation earlier this week.

Perhaps the only slight fly in the ointment is the fact that Uzbekistan’s win came in the absence of several global chess heavy hitters. Namely, Russia and Belarus, who were excluded from the competition over geopolitical developments, and China, where COVID-19 travel restrictions are still in place.