Officials are jealously maintaining control over information while orchestrating suspiciously rosy accounts of a country on the mend. 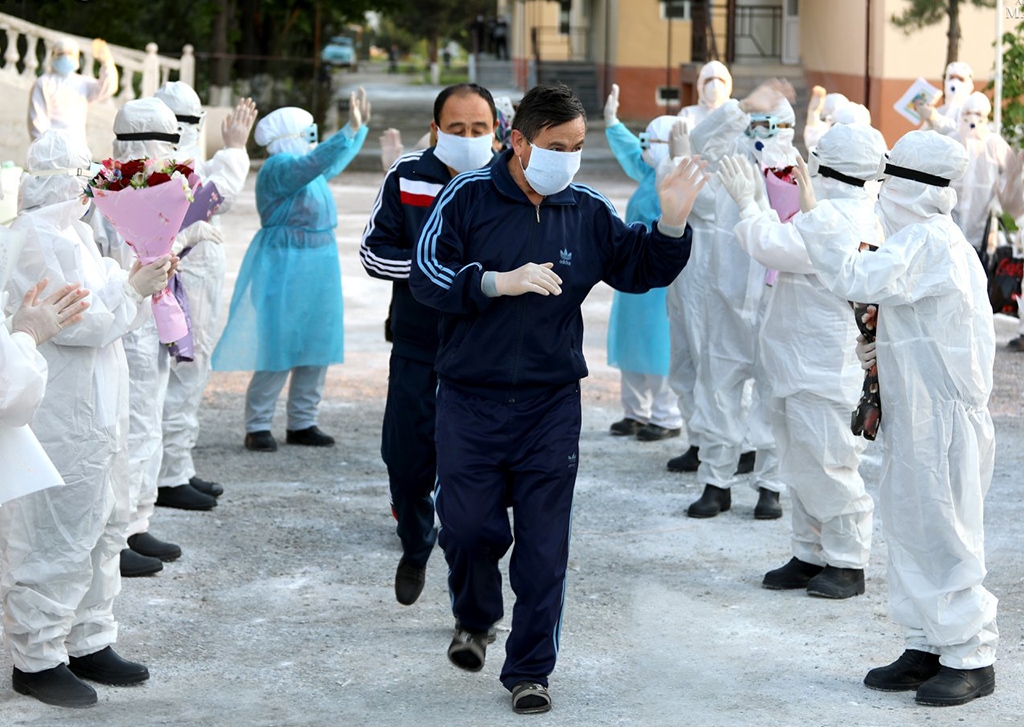 State television news in Uzbekistan has daily taken to showing images of people being discharged from hospitals to the applause of staff.

The scenes play out to a more or less set scenario: Doctors and nurses in their protective garb hand over bouquets as a grateful, now coronavirus-free patient expresses praise for President Shavkat Mirziyoyev. A doctor then takes his turn addressing the camera, again being sure to thank the government for its efforts. The now-cured patient is finally driven away by a police escort.

The function of the choreography, which is also faithfully reported by local media across the board, is to instill a sense of optimism and confidence in the ongoing battle against the spread of COVID-19.

Official figures certainly seem to vindicate that positivity. As of the morning of April 29, there are 939 people currently with COVID-19. A larger number, 992, has been cured, officials say. A relatively small number – eight people – have died with coronavirus. That implies a fatality rate of 0.4 percent, lower than in many nations with significantly more developed health care systems and with much more thinly spaced populations.

But the jealously maintained control over data is inevitably prompting questions about the plausibility of the official account and whether the government is exercising overly suffocating control of the press.

The only certain source of information at the moment are the numerous daily briefings operated by a multi-ministry COVID-19 operational center. Representatives of health, economic and law enforcement departments regularly provide updates and respond to handpicked questions.

Initially, in the days after the first coronavirus cases were confirmed, social media hummed with news about terrible conditions in medical facilities and the isolation wards created for potential or suspected COVID-19 cases. Around the middle of March, one man being held at a children’s summer camp in the city of Chirchik, which had been turned into a quarantine facility, contacted RFE/RL’s Uzbek service, Ozodlik, to complain that he had been put in a cold, unhygienic room with four other people.

Complaints initially centered on poor mobile phone signals. But early quarantine subjects were lucky on that front. On March 23, the Health Ministry announced that people in quarantine would not be permitted to keep their phones or laptops, thereby denying those unhappy with their conditions the ability to reach their relatives or for that matter journalists.

The explanation from justice officials was that the devices were potentially dangerous vectors for infection. Within a day, the Interior Ministry came out with another line: Communications were being restricted in quarantine facilities to prevent the “spreading of incorrect information.” People in isolation were only permitted to speak to relatives by means of landline phones.

Journalists are not allowed independent access to the quarantine facilities either. The perimeters of the buildings are guarded by rifle-toting National Guard troops in menacing armored vehicles.

There is not much journalists are allowed to do at all, in fact, while much of the country is in a state of preventative lockdown. Doctors are categorically forbidden to speak with reporters without prior authorization. In practice, it is almost invariably only state media or reliable pro-government outlets that are granted access. Other media may only republish what they are told in bulletins. Under those conditions, when doctors are interviewed, they invariably offer glowing and wholly acritical accounts of how the government is performing.

The problem can generate special anxiety when it comes to the sensitive issue of how well health workers are being protected from the virus. Officials seldom provide information about infections among hospital staff.

In late March, Mirziyoyev reported on an outbreak at the Virology Research Institute that had infected 11 employees. More recently, on April 15, it was reported that 74 health workers in Andijan province had been diagnosed with COVID-19.

And then on April 23, chief epidemiologist Nurmat Otabekov said at an official briefing that six medical facilities in Tashkent had been shuttered for quarantine.

“The main reason for these closures … is that individuals have been found to have the coronavirus,” Otabekov said, without offering figures.

Neighboring Kyrgyzstan and Kazakhstan have been much more candid about their health worker troubles. Officials in Kazakhstan have said that around one-quarter of their coronavirus cases are among health sector employees. It is a similar proportion in Kyrgyzstan.

There have been unnerving stories. One doctor died when he remained home and tried to self-cure after falling ill. He later died at the Virology Research Institute, a fact that was carried by local media.

Zilola, a health worker who spoke to Eurasianet only on condition that her real name not be used, said her clinic was among those shuttered after a colleague was diagnosed with coronavirus.

“After that, they closed our medical center. All medical personnel have been transferred to quarantine at another treatment facility. There was no hot water at the hospital, and the food was bad, but later the situation improved a little,” Zilola told Eurasianet.

Zilola said that Uzbekistan was poorly prepared at the outset of the crisis for the arrival of COVID-19.

“Nobody came to explain to us what this virus was. Now I am just stressing out and I want to go home to my children,” she said.

If journalists are restricted in their scope for action and movement in the capital, Tashkent, things are little better in the regions.

On April 21, journalist Sharifahon Madrahimova was detained for two hours by police in the Uchko’prik district, in the Ferghana province, while trying to report on price increases at the local bazaar. Police deleted her audio-visual material.

A chill has descended over social media as a result of the introduction of emergency legislation punishing the publication of anything deemed by the courts to be false information about COVID-19 with up to three years in prison. Media outlets deemed to be printing false information can face fines of up to around $9,000.

Although Uzbekistan has made tentative reforms to its justice system, few serious observers would try to argue that the courts are yet operating impartially and without interference from above, especially on matters of acute political sensitivity.

The government has nominally instituted a passe-partout system for journalists, but this has been implemented fitfully for anybody but state and loyal outlets. A regular press pass, even one issued by the Foreign Ministry, does not ensure its holders with the right to free circulation.

And yet, there are many areas about which the public and journalists would like to have more reliable information.

The coronavirus testing regime, for example, has been rolled out in an uneven manner. Until the last week of March, these tests were only being carried out in 16 authorized clinics run by the state. Privately owned clinics were then permitted to provide the same coronavirus-detection service until September.

But then within a month, this changed again. The government once more banned the private clinics from doing the work. Otabekov, the country’s chief epidemiologist, said at a briefing on April 22 that this was because the state system was more than enough to handle the workload. Otabekov had categorically stated weeks earlier that the government would refrain from a mass testing approach.

Something has changed. Whereas on April 7, the government said it had done 61,500 tests to date, it announced on April 19 that it had done 11,800 tests in one day alone. By April 29, Worldometer, an independent site tracking coronavirus data worldwide, had registered 242,536 tests in Uzbekistan to date.

Information about the reliability of the tests or their specific provenance is hard to parse, although most seem to be from China, Germany or Russia. On April 29, the Chinese Embassy told media that Beijing had provided Tashkent with another batch of 100,000 tests.

Even as the rate of testing has soared vertiginously, the number of cases being detected is on a markedly downward trajectory, implying that the Uzbek authorities have been abnormally successful in containing their outbreak.

On April 23, Uzbekistan slapped a temporary ban on the export of materials used to make medical-purpose products, arguing that it needed to ensure there was enough to go around to meet internal demand. A few days later, a plane landed in Moscow carrying the latest batch of a planned 5 million medical mask consignment that is part of an Uzbek humanitarian aid program.

Without access to doctors or the ability to inquire freely, the public must take assurances that medical staff are adequately equipped with personal protective equipment, or PPE, at face value. Industry insiders say masks are being churned out at a rate of more than 2.5 million daily.

Glowing accounts of recoveries are also difficult at times to reconcile with the government’s candid admission of insufficient equipment with which to treat the sick. On April 17, Mirziyoyev ordered that the government buy 2,300 new ventilators on the international market. The purchase was to be made with money provided by the World Bank and the Asian Development Bank.

Like most other countries battling coronavirus, Uzbekistan has had to scramble to build up its arsenal of ventilators. Mirziyoyev said on April 10 that 500 had been bought from Russia, which is struggling to contain its own outbreak. There are also plans to build a ventilator factory with investment from Slovakia and Russia.

Officials appear to recognize that their iron grip over information, not to speak of the restrictions on movements for the public, is generating frustration. This, they say, is a necessary price to pay for overcoming the crisis.

“The rules are now dictated by the epidemiological situation,” the Tashkent city police said in a statement earlier this month. “This is not the time for ‘asserting one’s rights.’”