The public is livid that the government has been so hapless in prepping for the heating season. The response from officials has been to dissemble or threaten those who try to report on the situation. 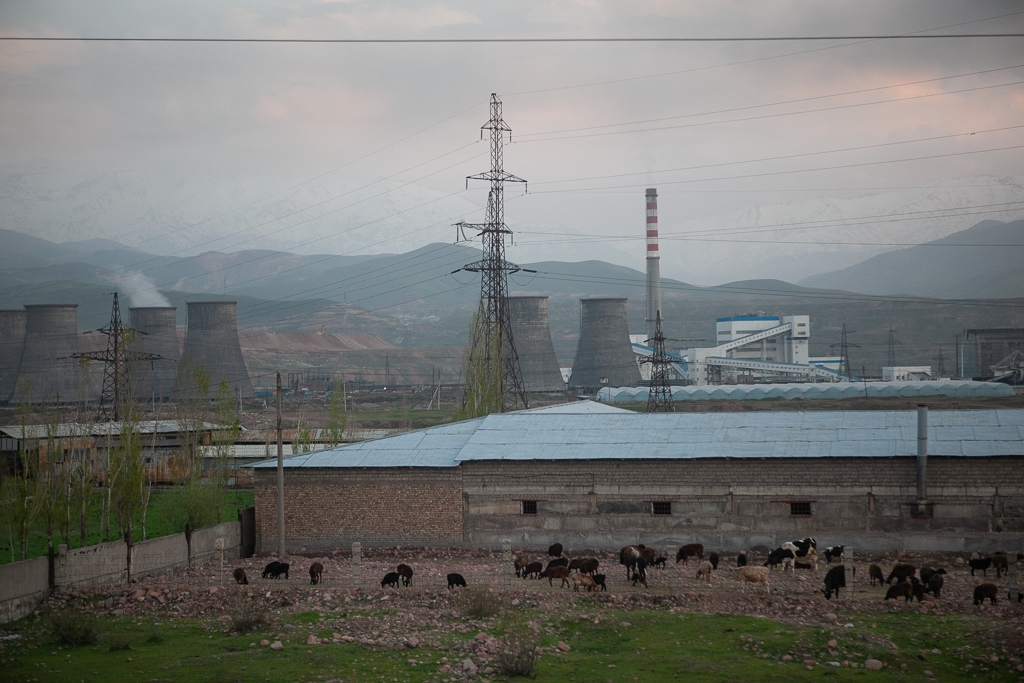 A coal-fired heating and power plant in Angren (Eurasianet)

The problem with dung is that it doesn’t burn like coal, Mavjuda Usmanova explained. The heat lingers only briefly.

“Maximum, you get half an hour. So you need to throw on the dung often,” said Usmanova, 59, who lives in Turtogayni, a village in Uzbekistan’s Kashkadarya region. “At night, I get up two or three times to fill up the stove or the room will go cold. I am afraid the grandchildren will freeze.”

And the start to winter has been particularly bitter in Uzbekistan this year. As early as November, temperatures had slipped below freezing. The public is livid that the government has been so hapless in prepping for the heating season. The response from officials has been to dissemble or threaten those who try to report on the situation.

Rural communities not yet connected to the gas grid, like the one where Usmanova lives, have it worst. Dung is their salvation.

The household of seven huddles around the metal stove. The dung briquettes, known as kizyak, are piled up next to the fire. The flames crackle and spit, emitting an unpleasant odor, but they do keep the cramped room warm so long as the fuel keeps coming.

It is just as well the Usmanov family began preparing for the cold months earlier.

Almost every family in the countryside owns a cow, sheep or goat. Cows produce the best fuel. Gathering and processing the manure is typically women’s work. The material is collected and mixed with water and wheat stubble left over from the harvest. The blend is shaped into bricks and put out to dry. The roof is a good place to lay the blocks for maximum exposure to the sun.

“The best dung brick measures 15 centimeters by 20. That is suitable for a stove, the hearth or a tandyr (bread oven). Sometimes we mix it with coal, if that’s available. But we usually use dung without coal,” Usmanova said.

The family produced about three tons of kizyak this year – a good amount.

Techniques vary. Abduvali Mingishev, 62, who lives in Kishlik, not far from Usmanova, says his family uses molds to form the bricks.

“We push the animal waste mixed with water and straw into molds. After drying, you get dung bricks. Very convenient,” he told Eurasianet.

“We knead the livestock excrement in water and then put it into cellophane bags. It sits in the sun for 20-25 days. Then we rip off the bags and store the finished product in the barn,” Navruzov said.

The pen for the cattle and poultry stand at one corner of the Navruzov farmstead. A little clearing nearby is where the kizyak is prepared. The area is littered with excrement, straw, plastic sheeting and sackcloth. Chickens skitter through the mess. At the sight of a stranger, the cows clatter their hooves.

“There are our kizyak makers. They preserve us from hunger and the cold,” said Navruzov, visibly embarrassed.

The art of making this primitive fuel resurfaced with the inexorable decline and subsequent collapse of the Soviet Union.

“When the Soviet Union disappeared, so did the gas,” Usmanova said. “Before that, we had almost forgotten what kizyak even was. Only mom and grandma were able to tell us how it was made. I never imagined that we would have to revisit the learnings of our ancestors.”

The skill of producing the fuel has proven especially indispensable this year. Cold winds began to blow south from Russia around the middle of October. The frigid snap and the sudden, heavy snowfalls that came in early November put an intense strain on the national gas supply system and the electricity grid. In some places, the temperature dropped to -14 degrees Celsius (7 degrees Fahrenheit).

Many restaurants and teahouses had their gas supply disconnected. Because of the drop of gas pressure, large cement plants in the cities of Ohangaron and Kuvasoy suspended production, leading to a 5 percent surge in prices for cement, the state Anti-Monopoly Committee reported.

In the Yakkabog district of Kashkadarya region, local agricultural entrepreneur Abdinabi Giyosov told local media that 6,000 of his chickens had perished because of power outages over a three-day period running up to November 20. When Giyosov complained to the authorities, they told him that he was to blame for failing to take precautions by finding alternative energy sources.

Interruptions in the power and gas supplies generated much grumbling, not only online, but also on the streets. In some regions, crowds picketed their district and city administration headquarters.

When local media reported on all this, they received ominous warnings from the state press regulator about purportedly disseminating news “one-sidedly and under the influence of emotions.” The regulator hinted darkly that sanctions could follow if more similar reporting were to be produced.

Too much and never enough gas

Svetlana Sidorova, a state-employed meteorologist, said the last time Uzbekistan had experienced such weather was five years ago, when the temperature dropped to -10 degrees Celsius at the peak of the cold.

“Uzbekistan’s climate is intensely continental, so after a few days of below-freezing cold, it can sharply return to above-freezing. But we gave the authorities and the population a week’s notice about the arriving cold,” she said.

As it happens, the government had been expecting a hard winter. Back in September, President Shavkat Mirziyoyev stated at a government meeting that temperatures this year were anticipated to be between 2 and 5 degrees Celsius lower than usual. He then ordered an additional 6 million tons of coal to be procured and set aside to supply the general population.

In the meantime, though, other parts of the fuel supply system have fallen short. According to the State Statistics Committee, natural gas production from January to October reached 40.4 billion cubic meters, a drop of 9.7 billion compared to the same period in 2019.

The government issued no warning that a gas shortage might be looming, however.

Still, that was a problem mainly for urban and built-up areas. But around three-fifths of the population, around 20 million people, live in villages and outlying rural locations.

Turtogayni, Usmanova’s village, was not always cut off from the gas grid. The evidence that people had the fuel fed into their homes can still be detected from the sight of rusted metal pipes. Most of that infrastructure, though, has long been dug up and sold for scrap.

This happened in part because the newly independent and cash-starved nation began in the early 1990s to sell much of its gas to China, Russia and Kazakhstan. Villagers were left to fend for themselves. Coal was one substitute.

Back in 2005, the late President Islam Karimov issued orders for everybody to be provided with cheap coal from the Angren open-pit mine, which lies along the highway between Tashkent and the Ferghana Valley. But by the time this fuel reached the villages, the price would hit a level unaffordable to many.

Calculating whether to splash out on coal requires some basic accounting. A 50-kilogram sack costs around 120,000 som ($12). That will last around three or four days for a typical household. A heating season lasting five months or so can entail outlays of around $500, which is a princely amount by Uzbek standards.

The heating season has bedeviled Uzbek authorities for decades now. Fixing the problem will require costly investments and complex and wholesale reforms. But experts say some fixes could be made in the short term.

Political analyst Farhad Mirzabayev suggests that liberalizing the gas market would be one way of easing this predicament, at least for those on the grid.

“If we don't have enough gas and [state-owned] Uzbekneftegaz is unable to handle it, then let some private company supply gas imported from Turkmenistan and sell it at market rates,” Mirzabayev told Eurasianet.

The stance adopted by officials, though, can look like hard denialism.

Uztransgaz, the company responsible for piping gas across the country and into homes, meanwhile, takes the view that Uzbeks are using far too much of the fuel. Last year, company representative Erkaboy Aliyev unfavorably compared consumption in Uzbekistan to what he termed “developed countries.”

“In other countries, one citizen average uses 90 cubic meters of gas, but in Uzbekistan the average is 400 cubic meters,” he told reporters.

When Eurasianet queried Uztransgaz’s press office about how this figure was calculated, they were unable to provide a response.

All this means little to Usmanova. What she knows is that the country does not have enough gas to supply her home. Her comfort is the three tons of dung in storage, which should last till spring.

“If we are connected to the gas grid, I’ll immediately do away with the hassle of preparing kizyak for winter,” she said. “I will just give away all our manure to farmers so they can use it to fertilize their fields.”