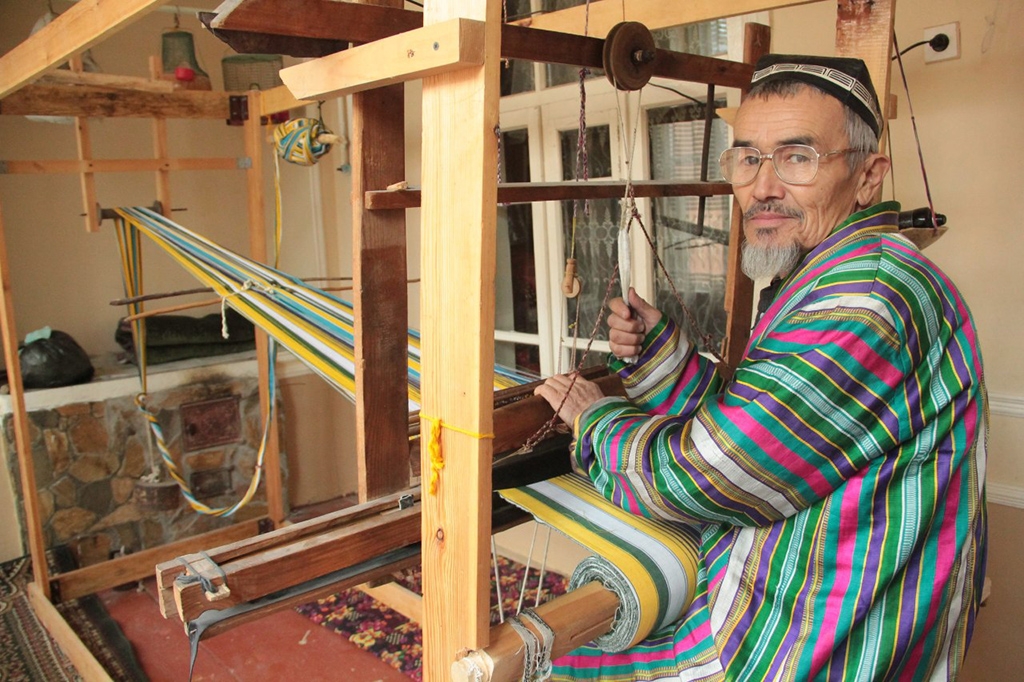 Abdunabi Toshtemirov is one of a few hundred carriers of the old master silk-weaving traditions in Margilan. (Eurasianet)

The pomegranate and onion peels, walnut shells and the roots of obscure plants piled up by the cauldron in Abdunabi Toshtemirov’s home cast a faintly pungent odor.

When the time is right, they will all go into the mysterious blend that Toshtemirov uses to dye his fabrics. Fashioning these concoctions is a skill that silk-making artisans in the Ferghana Valley town of Margilan have been handing down from father to son for generations.

Toshtemirov’s studio is small. There is barely space for the loom, which measures around one meter by three. The long, multicolored threads are stretched upon his instrument like strings on a harp. As the shuttle flies forward and back, a pattern emerges before the onlooker’s gaze.

Toshtemirov, 60, is what is known as an abrbandchi, the artisan responsible for designing and applying the pattern of the warp. The term comes from the Persian word abr, meaning cloud, the name given to the ikat fabric typical to the region.

In Margilan, weaving and dying fabrics has long been exclusively man’s work. As times have changed, women have been inducted into the craft, but Toshtemirov will not have any of it. He thinks traditions should be preserved and that it is this which gives his products their special value.

Toshtemirov was born to a family of silk-weavers. He recalls how as a child he would play with white and silver threads. His grandfather traded silk to Khotan, an oasis town in what is now China’s province of Xinjiang.

Soviet rule was a dark time for small-scale craftsmanship. Artisans operating their own workshops were decried for their supposed petit-bourgeois entrepreneurship and nearly obliterated as members of an undesirable social class.

The defiant risked prison. Toshtemirov’s father was among those who toyed with danger by passing on his skills to his son.

“Some of my friends and acquaintances were thrown behind bars. To this day I feel fear when I see a policeman,” Toshtemirov told Eurasianet. “In our house, we had a hidden room where we kept the loom. You could get into the weaving room by going behind a set of shelves. There were windows in the ceiling. My father and I would spend nights weaving silk.”

Toshtemirov is one of a few hundred – maybe 250 or so – carriers of the old master silk-weaving traditions in Margilan.

The city, which today has a population of around 200,000, has long been synonymous with silk. The figures speak for themselves. Uzbek historians of fabric-manufacturing traditions say that in 1910, there were 1,387 silk-weaving workshops across the Ferghana region. Of those, 911 were in Margilan. These days, about 2,000 people in total are employed in the silk business. 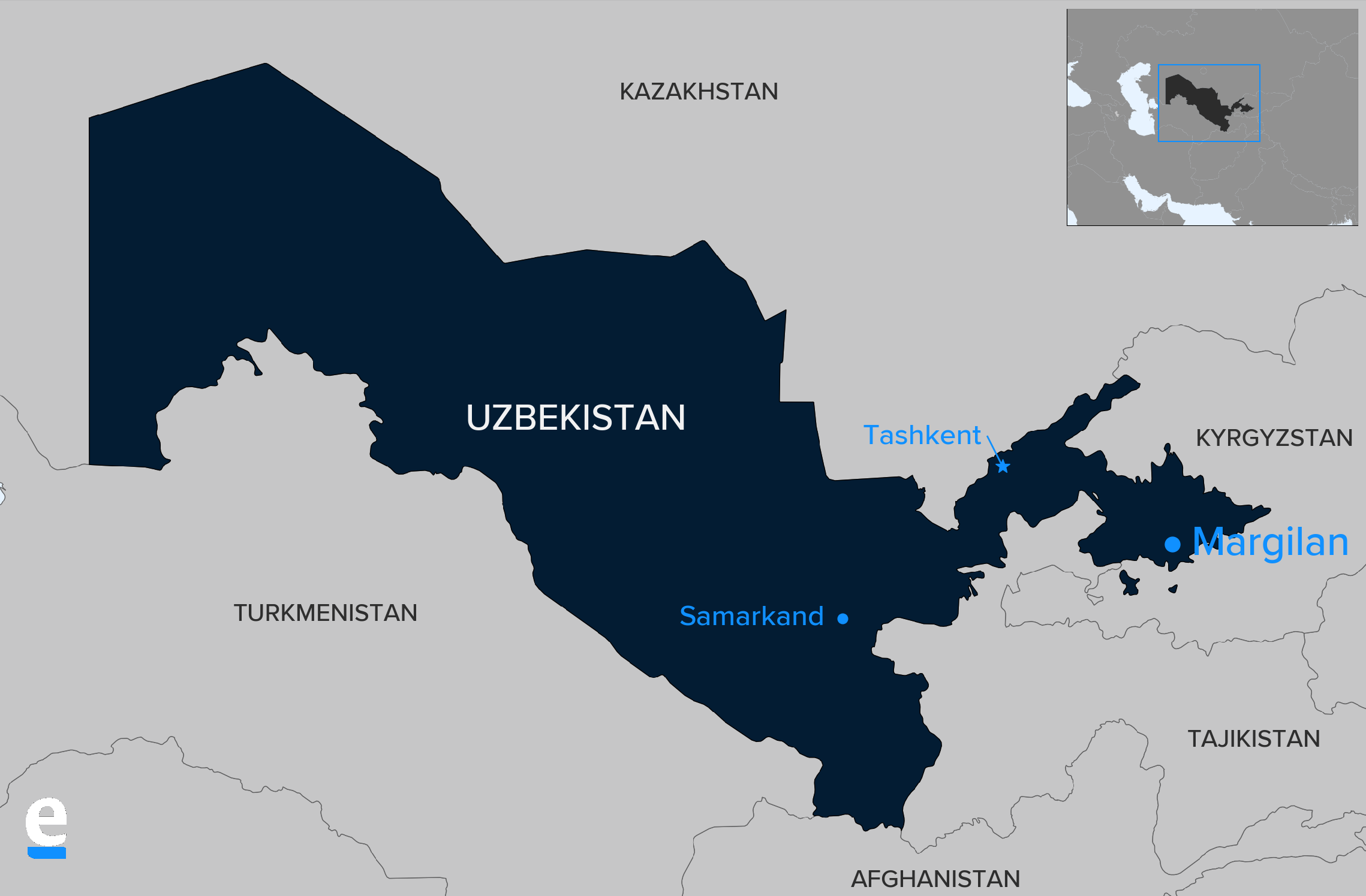 The restoration of silk-weaving as a craft began under Soviet leader Mikhail Gorbachev, whose reforms in the late 1980s allowed for the formation of worker-owned cooperatives. This allowed for some creativity to flourish outside the confines of the large-scale textile industry that prevailed in Soviet times.

Things took another turn with the fall of the Soviet Union, as the planned economy gave way to the free-for-all of the market. That forced silk-makers to adapt once more.

In late 2017, President Shavkat Mirziyoyev adopted a series of measures intended to ease life for artisans. These included tax breaks and a decree on the provision of soft loans for people involved in crafts.

Margilan does not have the architectural heritage of the likes of Samarkand, Bukhara and Khiva, so it has turned to its silk legacy to draw visitors.

Azamhon Abdullayev, owner of a silk factory called Yodgorlik, which means memory in Uzbek, has led the way. His premises are a welcoming space for new arrivals. The typically carved Ferghana-style wooden gates are always flung open and Abdullayev is eager to give visitors the patter on his vision for craft tourism, in either confident Russian or halting English.

“Yodgorlik is not just a factory, it is a factory museum. We have the whole cycle of production – from cocoon to ready fabrics and silk rugs – all based on the preserved ancient traditions of Margilan,” he said.

As Uzbekistan opens up to the world, it is experiencing something of a tourist boom, and people like Abdullayev are feeling the benefit. Yodgorlik was visited by 8,000 tourists last year, up from around 6,000 in 2018.

Abdullayev began working at Yodgorlik, then a state-owned factory, in 1981. Eleven years later, when the factory was privatized, he took it over and now employs about 200 people.

“Today we produce around 100 items – silk fabrics of various kind, from classic Uzbek textiles to silk carpets. We also recruit young designers. We produce modern fabrics based on contemporary patterns created by them,” Abdullayev said.

Back at his cramped digs, Toshtemirov said that large factories like Abdullayev’s pose no competition to him as they are focused on export.

“These days there are many factories where they produce fabric on electric machines. Where in one day they can produce between 50 and 100 meters of fabric, I can only make 10 meters. But the thing is that I use only natural dyes,” he said.

Toshtemirov said his output is mainly appreciated by designers and high-end tourist stores.

Textiles expert Shukhrat Ergashev is lobbying for the government to do more to celebrate Margilan’s silk heritage.

“We must build a museum,” he told Eurasianet. “And if we hold fabric festivals, they will attract a specialized kind of tourist – designers and representatives of the fashion industry.”

Toshtemirov, meanwhile, focuses on the craft itself and argues that it should be spread throughout the whole country. He has already played a hand in creating silk-weaving workshops in Tashkent, Samarkand and Bukhara and has trained about 100 people in the secrets of the abrbandchi.

His worry is that the easy and profitable appeal of industrial production could gradually extinguish the artisanal approach.

“The industrial production of silk and other types of Margilan fabric is displacing manual labor,” Toshtemirov said. “It is imperative that the state pay a permanent allowance to abrbandchi, regardless of the results of their labor. This is the only way to preserve this type of craft and pass it on to the younger generation.”