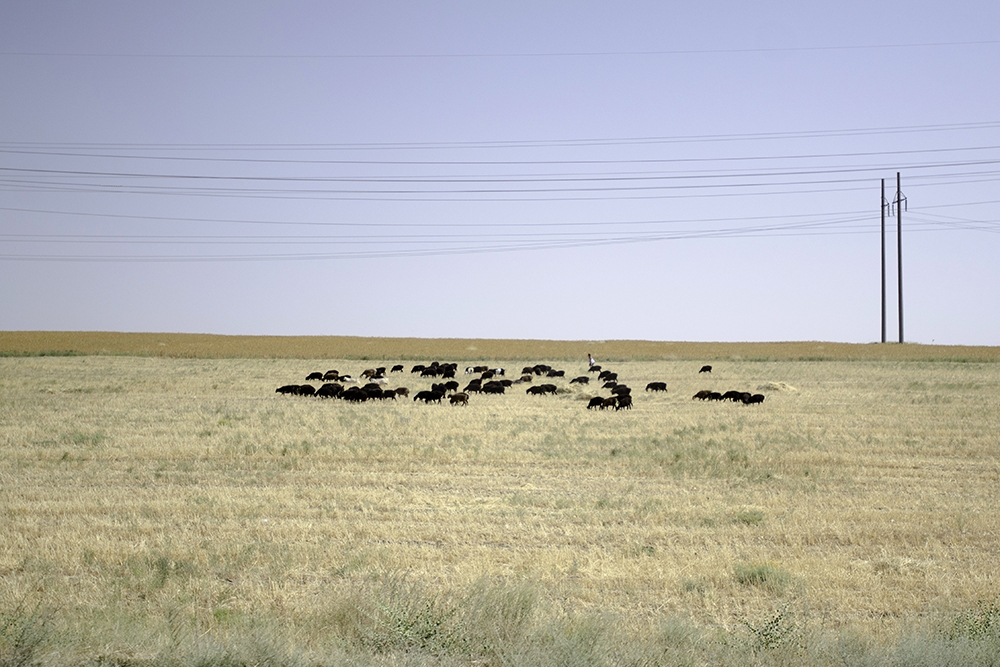 Sheep graze on a dusty and dry landscape east of Bukhara in July 2013. The Uzbek regions of Karakalpakstan, Khorezm, Bukhara and Kashkadarya have suffered intense droughts in the past 15-20 years. (Photo: Dean C.K. Cox)

In the 1990s, farmers with his Sary Altyn agricultural association — the name is Uzbek for “white gold” — would regularly yield around four tons of rice from every 10,000 square meter plot of cultivated land. Rice harvests in Karakalpakstan were some of the most bountiful in Uzbekistan.

The soil has now deteriorated, become heavily salted, and people are moving away for a better life.

“It is five, six years in a row that we don’t get enough water. The canal that runs past my land used to bring us about 7,000-8,000 cubic meters of water. Now there is not a drop. Many lands are no longer in use and my fellow countrymen’s situation is truly dire. There is no cotton, no rice and no wheat,” Nauryzbayev told EurasiaNet.org.

The Chimbay district of the autonomous Republic of Karakalpakstan, where Nauryzbayev is from, is home to around 110,000 people. The entire area’s economy depends on farming and animal husbandry. No water means no economy.

Around 500 square kilometers of the land in the region is irrigated. Intense droughts in 2000, 2001 and 2008 caused numerous artificial reservoirs in Karakalpakstan to dry up, causing major shortages not just for irrigation but also of drinking water. Many farmers went bankrupt and countless cattle perished.

Karakalpakstan, the arid westernmost region of Uzbekistan, is the country’s poster boy for drought, but other regions like Khorezm, Bukhara and Kashkadarya have suffered the same problem. The difficulties of agriculture are of immense economic significance. According to the Labor Ministry, around 27 percent of the working population is employed in the agricultural sector. Almost every second person out of Uzbekistan’s 31-million strong population lives in the countryside.

Scientist Zinovy Novitsky, who has for many years studied the problem of desertification, warns that the spread of degraded land is growing with every passing year, particularly in the area around the nearly vanished Aral Sea. The impact of the Aral disaster on farming is difficult to fully comprehend.

“Every year, more than 150 million tons of salt, dust and salt are thrown up into the air off the dried-up seabed of Aral. They drift across thousands of kilometers and drop again in the form of salt showers and snowfalls, provoking strong salinization of irrigated land. The fertility of soil is falling, as are, consequently, crop yields. Eventually, this land will be dead,” Novitsky told EurasiaNet.org.

At the start of every spring, farmer Batyr Khabarov moves with his family to the Tashkent region, outside the capital, to rent some land on which to grow vegetables. In the Kashkadarya region village where Khabarov was born, water is always scarce. This year was the fifth in which Khabarov uprooted his household and moved 500 kilometers to earn his living. The Tashkent region is relatively blessed with water — the Syr Darya River courses through it, so working there is a pleasure for Khabarov.

“We have been engaged in farming since childhood. When we were small, we helped our parents, so we know where and what to grow, and what will yield more profit. At home, we have enough land, but not enough water. Even drawing spring water is hard. So we came here, rented four hectares (40,000 square meters) of land and planted watermelons, melons, peanuts, corn and carrots,” Khabarov said.

Khabarov gets help from the whole family — his wife, adult children, nephews. The focus is on crops that need little excess expenditure. With their own hands, they sow, ridge the soil around individual crops and tend the plants as they grow. They live in makeshift, reed tents by the fields. As the arid areas of Uzbekistan become larger, the ranks of these latter-day nomadic agronomists is growing.

Agriculture in Uzbekistan is especially reliant on a strong system of irrigation, which uses up 90 percent of the country’s available water resources. And most farmers and specialists agree that the amount of water now flowing in from Kyrgyzstan and Tajikistan simply is not sufficient for requirements.

Mashal Khushvaktov, a farmer from Andijan with 40 years of working experience under his belt, uses Facebook to give advice to farmers and household agronomists on how best to tend to seedlings, fruit trees and vegetables. He believes that people who plan to create their own gardens and orchards need first and foremost to think about water.

“The easiest way is to use underground reserves, spring water in other words. In the Andijan region, about 90 percent of requirements are addressed this way,” Khushvaktov told EurasiaNet.org.

When it comes to water shortages in Uzbekistan, the agricultural elephant in the room is cotton. Irrigating 10,000 square meters of cotton fields requires 500 cubic meters of water. The crop needs four cycles of irrigation before it reaches the mature stage of its life cycle.

“In theory, we have enough water. The whole problem is in the ineffective management of water resources and the outdated irrigation system. New irrigation technologies are widely available, but there is no interest in them, not least as they cost a lot,” a farmer in the Ferghana Valley told EurasiaNet.org.

An article in science journal Nature published in October 2014 about the issue of water in Central Asia illustrates this point well by explaining how little water manages to contribute to the economy unit for unit in the region. Uzbekistan uses around 2.5 square meters of water per dollar of gross domestic product — one of the most economically inefficient rates in the world.

There is some sign of a rearguard battle against a fate that can often seem inescapable.

In 1995, Uzbekistan became a party to the United Nations Convention to Combat Desertification. As part of the country’s efforts to address the problem, Novitsky is studying how to increase the proliferation of desert plants that might help secure the shifting sands. He believes not all is lost.

“Planting forests and plants on degraded land will enable the creation of pastures in the deserts of Uzbekistan,” he told EurasiaNet.org. “This country cannot do without growing cotton, since this is a strategically valuable crop. But we need to economize water, and so far we have been very wasteful in this regard.”