The country grows 56 different varieties, but some of the best simply can’t be shipped abroad. 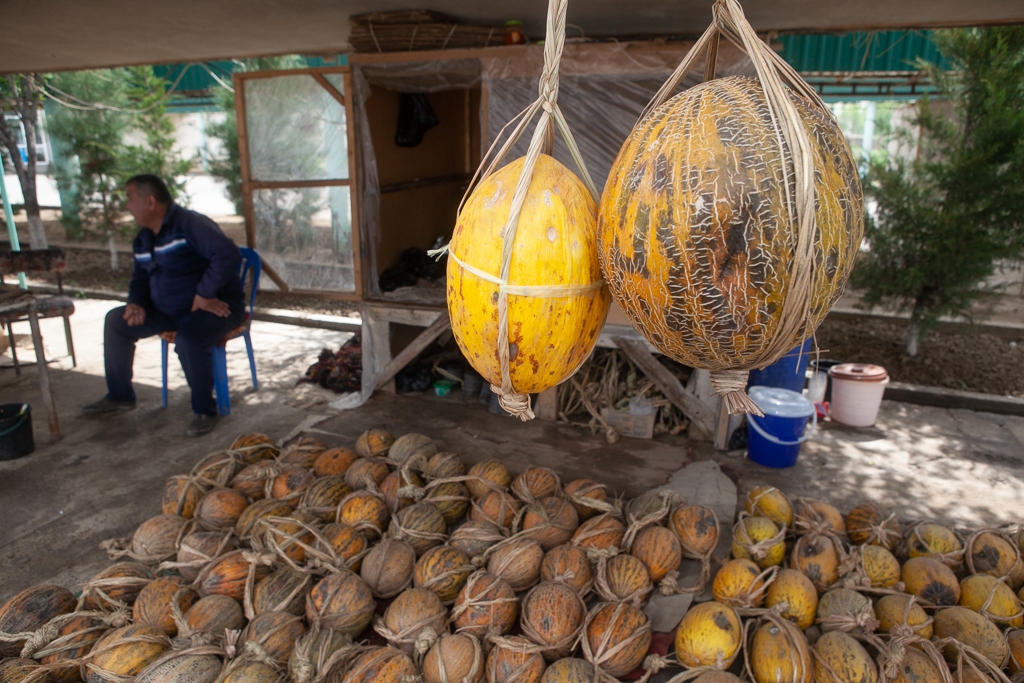 His knife slices smooth and fast into a bright green melon transformed within seconds into a number of glistening and even-sized portions. Akmuradov smiles proudly as he wipes the sweat from his brow.

The work is its own reward, as he holds up the fruit by the peel and chomps off the yellow flesh. The fruit is sweet, warm and redolent of honey. It melts in the mouth, but ravenous eaters also have to contend with the sticky liquid dribbling down their chin.

Behind Akmuradov, 63, is a seven-hectare field covered with yellow-and-green spheres, like somebody had forgotten to clear up after a giant game of volleyball.

“This is the Gurvak variety, the sweetest and most juicy melon. It grows only here,” said Akmuradov, whose farm is in Uzbekistan’s Khorezm region near the banks of the Amu-Darya River. “And demand is strong.”

Gurvak does not get as far as the bazaars. People love it so much they’ll buy up the harvest from farmers before traders can get their hands on it.

Twelve varieties of melon are grown – have been grown for centuries, in fact – in the Khorezm region alone. It is a rare concession to fruit-growing for an area that suffers a paucity of water and an excess of saline soil. The Ferghana Valley in the east is a more dependable source of fruit.

Melons are not a mere delicacy in Uzbekistan – they are a meal. A large one can feed a family of five or six. What is not consumed in the season is then dried for eating in winter.

According to Rahim Masharipov, another farmer in Khorezm, 2020 has been a banner year for melons. Large numbers were grown, and demand has been strong in markets like Kazakhstan, Kyrgyzstan and Russia. The only problem is there has been nobody to harvest them.

“During lockdown, there were difficulties with labor. The people we hire every year could not come to us. The whole family had to go out and pick melons, and we hired fellow villagers,” he told Eurasianet.

Melon has been the salvation of Khorezm farmers. The sharp uptick in foreign demand has led to a surge in exports. That has seen Akmuradov and Masharipov’s income expand significantly.

According to official figures, by the end of July, Uzbekistan had this year exported 11,500 tons of melons and watermelons – but that figure is not wholly helpful as it bunches together the two very different types of fruit. Eurasianet’s calls to the State Statistics Committee for clarification went unanswered.

Roman Salamatov, 59, is one of the country’s biggest exporters. He has been in the business since 1994, but these are unusually bright times for his company as he sizes up new markets.

“The main export destination for our melons is countries in the European Union, Ukraine and Belarus. Last year, we exported a little more than 1,000 tons, this year we are planning 1,500 tons,” he told Eurasianet.

Last month, for the first time, a consignment of 20 tons of melons was delivered to the Netherlands, the Foreign Ministry reported.

Melons are an annual plant, which means they have to be sown from scratch every year. Planting seeds happens in April. The saving grace of the Gurvak variety, though, is that it is not too thirsty, which is just as well in Khorezm.

Khorezm doesn’t have a monopoly on melon-farming. Uzbekistan grows 56 different varieties of melon, according to the Uzbek Vegetable, Melon Crops and Potato Research Institute. Around 23,400 hectares are set aside for the crop.

“According to preliminary estimates, 850,000 tons of melon will be harvested in the fields of Uzbekistan this year. This may well meet the country's internal and external needs,” a representative for the institute told Eurasianet.

The conditions and climate in Bukhara region are in many ways similar to those in neighboring Khorezm. On his arid eight hectares, Furkat Barotov grows three varieties of melon: Obinovot, Buri-kalla (which is Uzbek for “Wolf’s Head,” incidentally) and Mirzachul.

“This year, we’ve harvested about 20 tons of melons. Some of it was sent to local markets, and the rest was exported. We expect a net profit of about $10,000,” Barotov told Eurasianet.

When it comes to picking favorites among the types of melons, Salamatov, the exporter, will not be pinned down. He likes them all, he insists.

“The most exported variety is Mirzachul. It is best known as Torpedo,” he said, alluding to the long and narrow shape of the fruit. “Its homeland is the Hungry Steppe of Mirzachul.”

But that Gurvak melon Akmuradov sliced so expertly? Melon fans will have to travel to Uzbekistan to sample that in its best form.

“Gurvak could be exported. But this melon loses its quality by the time it reaches its destination,” Akmuradov said. “If we can devise new methods of storage and transportation, then Gurvak could be sent abroad. If we have learned to export peaches, figs and grapes, why shouldn't this variety be exported too?”