Last year Uzbekistan lifted a ban on individuals prospecting for gold. In a remote corner of Navoi province, locals and Chinese have not wasted time getting into business. 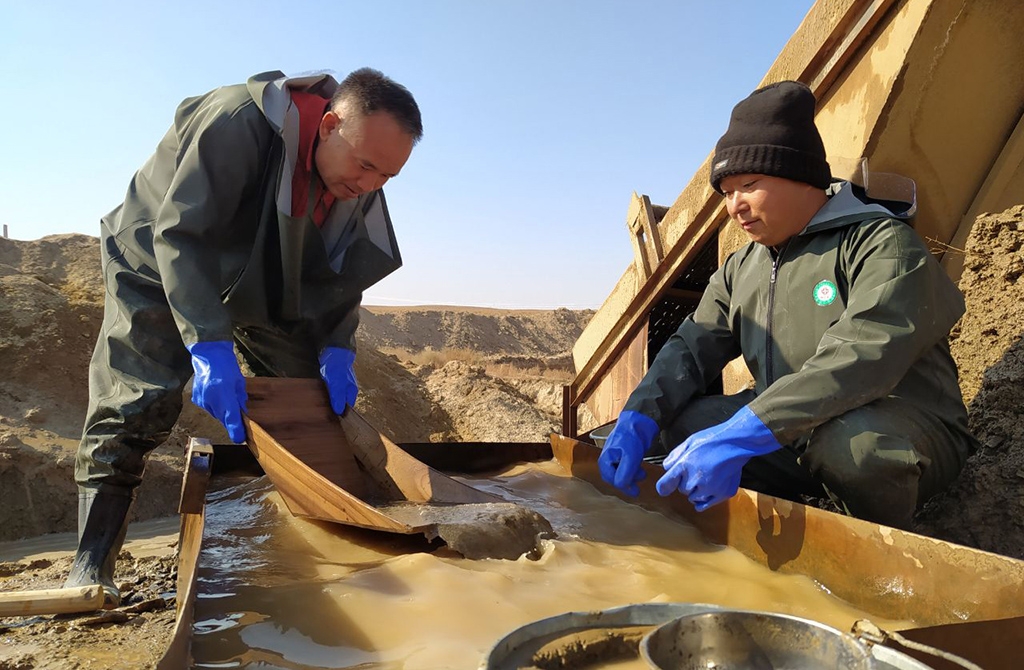 The only thing that stops the prospectors is winter cold. (Eurasianet)

Sirojiddin Khasanov wakes at around six in the morning, while it is still gloomy outside. He looks to the heavens to check what the weather portends.

The piercing November wind blows across the steppe with a gentle whistle. It is cold, but not too bad.

He heads outside with his tools – a pickaxe, a shovel and a tray. A pile of soil and stones lies waiting next to his trailer. Khasanov collects the debris in a bucket, and then pours it into a small tray, which he rinses with water.

Only sand and pebbles are left behind. Khasanov turns on the flashlight of his cell phone and squints. Nothing. None of the glints of gold that he was hoping for. He repeats the process another five times. Again, nothing.

Khasanov, 35, moved to the village of Soykechar, in Uzbekistan’s Navoi province, almost two years ago from his native Samarkand province. Looking for gold is his only livelihood.

“What would be really good is if the morning would start with something pleasant, at least a flash of gold. But so far, it is nothing. It is just that we don’t really have enough equipment. I know we have a lot of gold around here. And I will find it,” Khasanov told Eurasianet.

It was only last March that it became legal for regular citizens and small companies to prospect for gold. The legislation that brought this about was consequential, as searching for gold had until then been considered a crime that could land the offender in prison.

The language of the decree ending the prohibition conceded that the ban had created a culture of criminality.

Just 100 meters from Khasanov’s trailer, there is a group of Chinese miners at work. Khasanov looked on with envy at all their equipment – earthmovers, beds, lights, TVs, a couple of laptops and, most importantly, heating.

The hunt for gold on the Chinese field is performed to a well-rehearsed routine. A mechanical digger dumps soil onto a sluice mounted above a riffled rubber mat. Water is poured through the soil, washing away the diluted dirt. Anything more substantial slides onto the mat.

The slurry remnants are poured into a tray and then washed in small basins. When the fine sand and soil are washed away, gold deposits, should there be any, can be seen at the bottom of the tray. Each time the Chinese gold-panners spot small grains of gold, they exclaim excitedly.

"In each bucket of washed soil and sand we find three or four grams of gold. There is a lot of it here, but you need water to wash away the soil. We dug a well and use the spring water. There is gold, but no water," Hang Jiang told Eurasianet.

After performing another rinse, Hang showed a Eurasianet correspondent a fleck of the now-extracted gold, which he carefully wrapped in a cellophane bag. Up to 1.5 kilograms of gold per month can be mined this way. The only thing that gets in the way is the cold. Once the thermometer drops to -10 degrees Celsius (14 degrees Fahrenheit), the search comes to a halt.

Hang’s team consists of just four people, including himself. This is his second year in Uzbekistan. Before, he manufactured building materials. But when the government legalized independent prospecting, he decided this was the job for him.

There is another gang of Chinese prospectors on the adjacent hill. The boss is called Zhao Yu Hua, although he goes by Sardor, as he says few Uzbeks can correctly pronounce his Chinese name. The 48-year-old has been in Uzbekistan for six years. In that time, he has learned Uzbek, so he has little trouble communicating. In his last business he produced building bricks, but he turned his hand to prospecting gold in Soykechar in summer.

When a Eurasianet correspondent visited, he had been on the spot for two weeks and could boast of few successes.

“In the time we have spent looking for water and bringing in equipment, we have lost time. But at least since we have started digging, we have found eight grams of gold dust. The main thing is that we establish ourselves here, and eventually we will get to work,” said Zhao.

Zhao paid $3,000 to local residents for three hectares of land. Like his fellow prospectors, he paid $750 for his three-year license. The gold-hunting season begins in March-April and usually lasts until December.

Any gold that is found has to be sold to banks, gold mining companies or jewelers, which are the only enterprises authorized to trade in the metal. The price of one gram can vary from $35 to $50, depending on the quality of the product.

In the territory around Soykechar, the local population began to pan for gold two decades ago. The piles of soil and the scattering of four-meter-deep holes testify to that. Those prospectors used old methods – just their hands, shovels and pans.

Nurmorod Madatov, a 65-year-old villager, said that workers did not dig very deep out of fear that they would be buried alive by collapsing soil. As a result, the yields were always meager.

“Now the fields here have been acquired by four Chinese and three local Uzbek companies. The Chinese are active, while the Uzbek prospectors are just trying to get themselves set up,” Madatov said.

There is a sense of optimism about what this latter-day gold rush could bring.

“Perhaps our gold-bearing land will bring luck and wealth to the prospectors, and prosperity to our village. I hope that the youth of our village will stop traveling to Russia for money. When the money is lying around under your feet, all you need is to make an effort and get it,” Madatov said.