As Uzbekistan's Presidential Succession Underway, Putin to Drop By 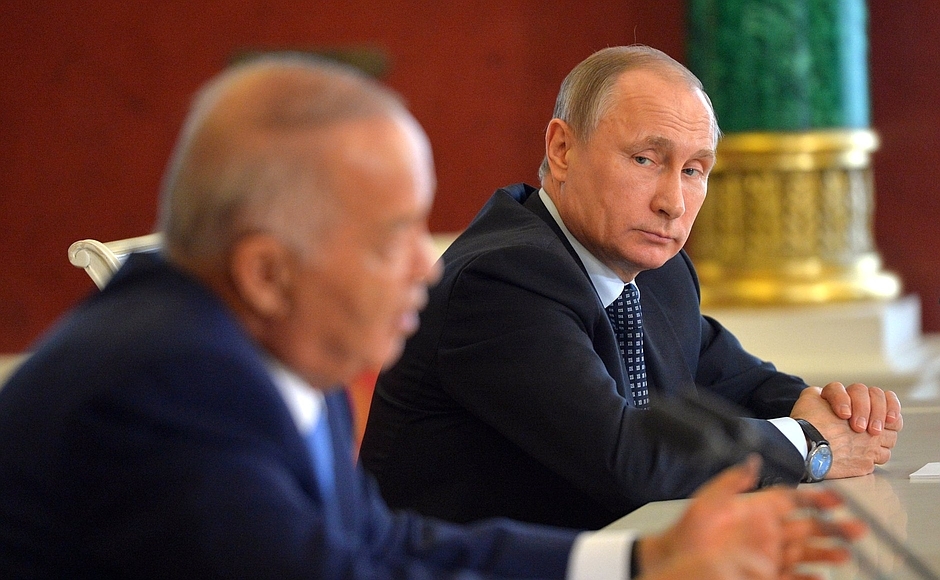 Russian President Vladimir Putin plans to visit Uzbekistan on Tuesday, inserting himself into an ongoing presidential succession after the death of President Islam Karimov, the only president Uzbekistan has known.

Putin will stop over in Samarkand on his way back from China, where he attended the G20 summit (and as a result missed Karimov's funeral; Prime Minister Dmitry Medvedev represented Russia). "I think I have to stop over tomorrow to pay my respects," Putin said. Putin's spokesman later emphasized that Putin's visit would be personal, but there will certainly be more to it than that. A report on the Uzbekistan news site anhor.uz initially said that Putin would also meet there with "possible successors," though that was subsequently edited to say he would meet with "the leadership of the country."

Most analysts, and this blog, are skeptical that whoever succeeds Karimov will do much to change Uzbekistan's foreign policy, which was characterized by isolationism bolstered by playing various powers off of one another. So it's unlikely Putin believes he can tip the scales on the ongoing succession process.

"Putin's visit is symbolic, to show that Russia will be highly involved in Uzbekistan's future, but also an attempt to reset relations," said Erica Marat, , an assistant professor at the National Defense University and Central Asia expert, in an email interview with The Bug Pit. "I don't think the Kremlin is able to influence the succession process itself, but this is an opening for Russia nevertheless."

Uzbekistan's isolationism has long vexed Moscow. Karimov refused to go along with Russia's regional strategy, dropping out of the Collective Security Treaty Organization military alliance and refusing to join the Eurasian Economic Union. The failure of Uzbekistan, the largest country in the region, to join these schemes has hobbled them.

Karimov's successor has not yet been named, but most speculation has centered around Prime Minister Shavkat Mirziyoyev, who headed the commission overseeing Karimov's funeral, a position that in Soviet times usually signaled the choice of successor.

That would be a relatively positive option for Russia, as Mirziyoyev is thought to have good ties with Russia's political and business elite. "If Mirziyoyev inherits power, Tashkent will most likely not escape a serious strengthening of Russian influence," said Russian Central Asia analyst Arkady Dubnov. "That does not at all mean Uzbekistan's return to the CSTO fold or accession to the EEU. It would more likely serve the interests of pragmatism than politics, Karimov's successor will need real support and in Moscow this isn't going to be cheap, the price will be high," he said.

"Putin is likely going to check out the new successor," said Rafael Sattarov, an Uzbekistan analyst based in Moscow, in an email interview with The Bug Pit. "This is to meet personally with the successor, and to discuss the modus vivendi. I think he also needs to be sure that the new leader is a decent candidate and won't disappoint tomorrow."

Putin himself said that he hoped Karimov's successor would "continue to develop relations" with Russia, which was undoubtedly far from how he thought about Karimov when not speaking publicly. "I hope that everything done by Islam Abdulganiyevich in aligning bilateral relations between Russia and Uzbekistan will be maintained and will develop further," he said.

Russis is of course not the only other country with an interest in how the succession in Uzbekistan proceeds. "Outside powers will also be manoeuvring" during the succession the Economist wrote. "Russia, the former colonial master, will be eager to assert its interest in what the Kremlin sees as its backyard. China, with its more mercantile approach, will want to secure its gas imports. And the United States will continue to woo Uzbekistan as an ally in the war against terrorism, mindful of the country’s border with Afghanistan."